Another Reason to be Dismayed by the Bullpen

Share All sharing options for: Another Reason to be Dismayed by the Bullpen

As Logan noted last week, the Mariners have made a transition in their bullpen strategy from general skill sets to specialized ones, jettisoning such steady characters as Shawn Kelley and Paul Spoljaric. One of the costs to such an approach was made numerically evident on Wednesday, when Kameron Loe appeared on television for about fifteen more pitches than he should have.

But there's a second, more insidious repercussion stemming from the new bullpen. Enjoy this bleak and not altogether unsurprising graph: 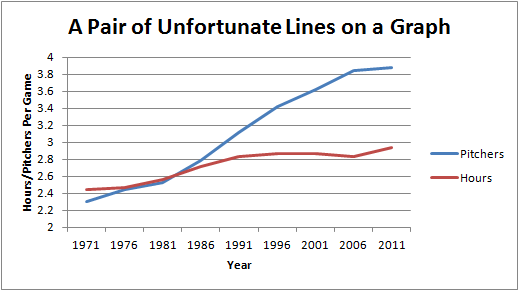 Correlation is not causation! It isn't. But in this case, we're talking about a lot of correlation. And what it's telling us is that the more pitchers you use, the longer games take. The more pitchers get replaced, the more commercial breaks necessary while the relievers warm up. The more commercial breaks you listen to, the more you have to listen to advertisements that use baseball clichés. And the more baseball clichés you listen to, the sooner you die.

So a more specialized bullpen is, for you as a consumer, a terrible thing. For the last couple of years, we've been relatively lucky: In 2012 the M's used 3.78 pitchers per game, in 2011 3.17, in 2010 3.25. This trend does not appear as though it will hold up. Sure, there are other factors involved in long games, things like pitches seen per plate appearance and walks given up, and the Mariners are pretty average in those things, so I'm not going to bother talking about them.

But once Mariners games reach the seventh inning or so, you'd better plan on taking plenty of bathroom and fridge breaks. That, or be driven slowly insane by Jay Buhner's perpetual endorsements. Your choice!