One Pitch to Kendrys Morales

Rhiner Cruz threw a pitch to the general vicinity of home plate.

Share All sharing options for: One Pitch to Kendrys Morales

When the Astros faced the Mariners for the first time as new division rivals, Rhiner Cruz pitched in the 8th inning. The first batter he faced was Kendrys Morales. Morales lined out. Cruz would go on to strike out Michael Morse before inducing a Kyle Seager ground out. I had to look up what happened in that inning because I was distracted by the first pitch of the inning.

"That's empty", you may say. And you would be right! But you would also be wrong; there is a box and some lines and PITCHf/x data. A pitch is represented on this chart, it's not my fault the axes only range from -3' to 3'. So with the data available and my extreme photoshop skills, I've cobbled together an approximation of where the pitch would have appeared on the chart, if the chart had been large enough to display it. 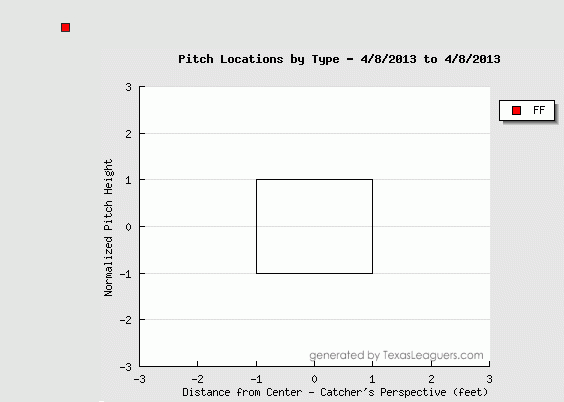 That pitch was terrible! Charts with visible data points are considerably better at showing us information than charts with no visible data points. Though, an empty chart can stille be more helpful than video footage. Often, camera perspective misleads our brains about the spacial relationship of objects. From this extreme angle, the awful pitch to Morales almost looks reasonable! 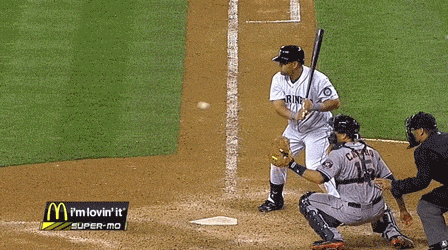 You might now be thinking, "Another still image? Show us a .GIF, damnit! It's the only thing you're good at." Though, I don't presume to know what you, the reader, think while reading what I, the writer, wrote. Seriously, the whole point of the previous image was to demonstrate that camera angles are unreliable at showing us pitch location!

(you might have to mouse over to play, who knows though, it keeps changing without warning!)

Apologies to you, reader. Everything about this is better.