Hisashi Iwakuma's finger is dry and/or blistered, depending on who you talk to. This appears to be interfering with his ability to effectively throw his best pitch. Because the Mariners needed more rotation problems!

Share All sharing options for: No Nonsense: Hisashi Iwakuma's Finger

Welcome, readers, to the third installment of No Nonsense! In this series, I reveal statistical abnormalities and little-known facts about your Seattle Mariners using as little text as possible. Without further ado...

During that time frame, Wainwright has averaged a little under 4 WAR per season. Iwakuma probably isn't quite as good, mostly because of dingers, but he's an acceptable #2 starter and a great #3.

Here is how Iwakuma holds his splitter: 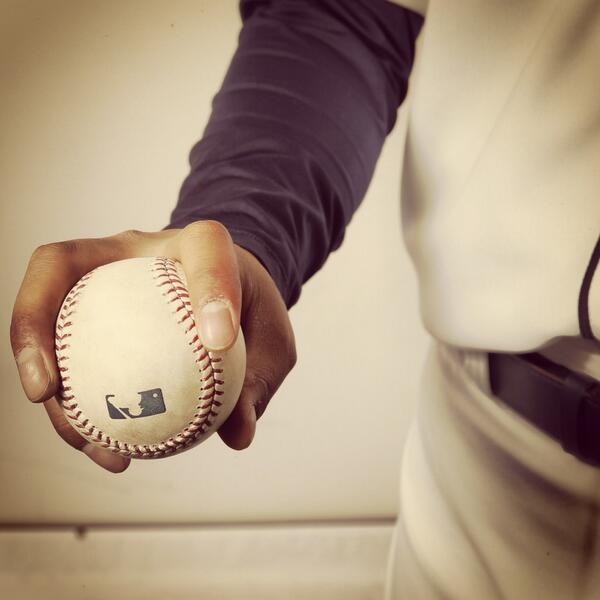 Uh-oh. Remember when Iwakuma came out of a spring training game because of a dry finger? It seems like that's the sort of thing that could interfere with one's ability to throw a splitter. Here's a tweet from Shannon Drayer:

Not for nothing but Carl Willis told me on the pre game show that the finger is still an issue with Iwakuma particularly with the splitter.

That was right before Sunday's game against the White Sox, in which Iwakuma went 8 innings and allowed 3 runs. The runs were all scored via the long ball, as is the norm in Chicago. One of those long balls came on a hung splitter. So was the finger affecting the movement on his split, leading to more hard-hit balls? Well...

Here's his splitter in Chicago. Most dropped under 20 inches, with a couple dropping around 10.

First hypothesis: perhaps the gun was wonky? Perhaps not, according to a look at Chris Sale's pitch movements from the same game. (2012) (4/7/2013). Sale's slider was dropping less than usual, but the other pitches were all in the right places. Iwakuma's curve was also moving just as much as it usually does.

It's hard to say for sure, because Pitch F/X data can be unreliable and because there were several pitches dropping less than usual that day. But it looks like Iwakuma's splitter wasn't moving well. He certainly hung a few.

So what's the takeaway? First, Iwakuma's finger is potential cause for concern. It may be costing him some of the break on his splitter. Second, and more importantly, Hisashi Iwakuma limited the White Sox in U.S. Cellular Field to 3 runs over 8 innings - without his best pitch.

Like I said. Hisashi Iwakuma is a pretty darn good starting pitcher.