We'd like to share another excellent FanPost from poster Kota_Nishioka all about Logan Gilbert's progression this season. Enjoy!

After a solid start to the season, Logan seemed to have lost his groove in August. However, many foresaw this, as Logan had mediocre peripherals, posting FIPs, xFIPs, PCRAs, SIERAs, and xERAs well over his season ERA and flashing subpar strikeouts and Stuff+. However, Logan, embracing his new alter ego of ‘Walter’, has revived himself, posting a 2.25 ERA accompanied by a 1.80 FIP, 2.55 xFIP, and 2.64 SIERA over that span. This beckons the question of what adjustments Logan made. The answer to this question is quite simple, the slider.

The Mariners love sliders. The M’s are third in the league in slider%, with a 28% usage rate, and have completely bought into the sweeper trend, with players such as Brash, Festa, and Murfee being prime examples. It is no surprise then that Logan’s favorite secondary throughout his major league career has been the slider. Unfortunately, while not horrible, it has not been amazing, accumulating +1 run value, 24.9% whiff rate, and a .335 xwobacon against in 2022. Although he had gotten a semblance of secondary command this year compared to 2021, he needed a good secondary to play off of his borderline elite fastball, and he was well aware of this. 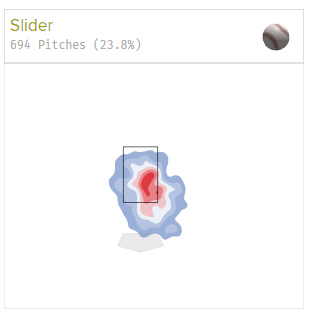 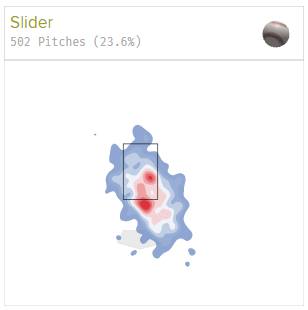 He experimented a heavy amount, switching to knucklecurves or changeup as primary secondary's many times with moderate success, or even adding a sinker which worked wonders for Robbie and Kirby. But eventually, Logan landed on changing his slider shape. Prior to this recent change, during the 2021 offseason Logan had altered his slider to be thrown ~3mph faster while sacrificing some movement. While this may have seen better results, it started to falter. That’s where this recent change comes in.

Logan has been inducing roughly 3 inches more vertical break on his slider than before, as well as 4-5 more inches of drop than prior to September. The trade-off for this change was 2mph and half an inch off of the horizontal break.

Although my video editing skill prohibit me from creating an overlay (I may eventually add one), the difference is easily noticeable and is night and day.

It has all been worth it though, with the whiff% of the slider, and fastball, skyrocketing in the month of September. The latter of which is benefitting from improved secondary stuff without worse tunneling. The curve is an anomaly and would require further research but it would safe the assume it is in the same boat as the 4-seamer. This has resulted in Logan’s gem against the Angels where he threw a career-high 11 punch-outs. Absolutely electric.

The improved stuff has led to Logan trusting and using his slider more, especially in 2 strike counts. This should go without saying, but throwing your best pitches more is good!

In spite of this, in his most recent start in Kansas City, he gave up 5 in the same amount of innings with only a trio of strikeouts to show for it. Coincidentally, his slider had reverted back to August’s movement profile and velocity, getting only 1 whiff on 7 swings. Today, the Mariners have a chance to clinch their first playoff birth in 20 years. Today, Logan Gilbert has the chance to become a Seattle sports legend by earning the winning pitcher in the game that ended the drought. Moments like these are the ones we sports fans truly perish, and this rings true for players as well. Just as how Castillo decided to stay in Seattle due to Julio's extension, Logan's future with the club may be heavily swayed due to the outcome of this game. It may sound like a stretch, but it never hurts to speculate. Maybe the Orioles unceremoniously lose, clinching the Mariners spot in the middle of the second inning and today's game may not matter as much. Alas, the fact of the matter is he is starting today, and it will all come down to Logan, or should I say Walter, and his slider, and how much it will break. It truly is a game of inches. #SeaUsRise.