Hello and welcome back to FanPost Friday! Before I introduce this post, a couple reminders for y'all!

Moving on! Today I wanted to share this awesome bit of analysis from poster Kota_Nishioka on the Mariners' bullpen low-key assassin, Matt Festa. Enjoy! -Eric

During the Mariner’s 14-game winning streak, the bullpen was crucial late in games to shut down the opponent's offense, with a collective mere 1.49 ERA during the streak, and still continues to be among the league's best. Though many arms such as rookie Penn Murfee or Erik Swanson deserve recognition and an article of their own, 29-year-old Matthew Festa will be the focus of this one.

In his third year in the big leagues, Matt Festa has been nothing short but a revelation for the Mariners, posting borderline elite numbers, especially from a sabermetric perspective.

However, in his two previous years, he had been less than remarkable, posting a 4.11 ERA in them. So what changed?

In 2019, his last stint in the major leagues, his slider registered 5.5 inches of vertical movement and 7.2 inches of horizontal movement, thrown at 86.2 MPH. This was arguably his best pitch, having a..289 xwOBAcon against, and a 29.9% whiff rate. Still, he only threw it 39% of the time, the other 61% going to either his 4-seamer, cutter, curveball, or sinker. However, during 2022 spring training, Festa mentioned a new slider, one which he called "more of a sweeper". This managed to take his pitch to another level. This year, his slider has had 2.5 inches of vertical movement and 16.1 inches of vertical movement at 82.9 mph. Though the vertical break has been reduced by 3 inches and the velocity 3.3 mph, the horizontal break has increased by an impressive 8.9 inches, turning the pitch into a sweeper as Festa had mentioned. 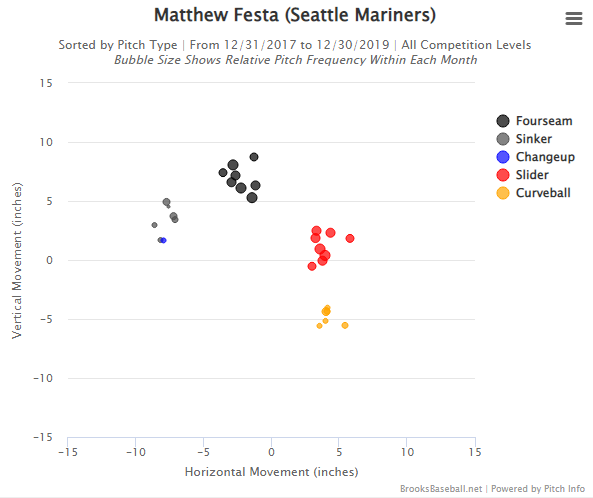 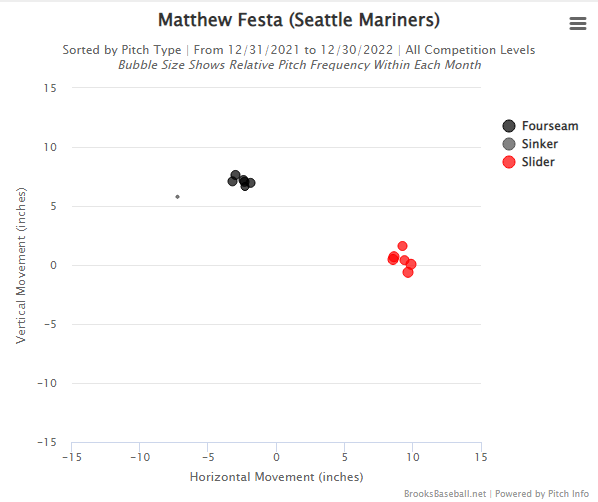 Another notable aspect of Matt Festa’s game that has seen development is his vertical release point and extension. In 2019, his 4-seamer had an average vertical release point of 5.3 ft. For reference, the average release height is said to be around 5.9 ft. The extension for his 4-seamer was 6.1ft while the average is 6.5ft. Release height and extension are important as they are directly correlated to VAA, vertical approach angle. This is basically the angle in which the ball enters the zone, with a number closer to zero indicating that it is flat, creating a rising effect especially on fastballs. In 2022, Festa’s vertical release height dropped to a remarkable 4.9ft. This is ranked 24th in baseball including submariners such as Tyler Rogers. Extension saw improvement as well, going to 6.4ft, a 0.3ft increase. This has transformed his VAA above average from 0.56° to 0.76°. Thanks to these changes, the whiff% on the 4-seamer skyrocketed from 16.5% to 33.6%, putting him 19th among relief pitchers and ahead of the likes of Ryan Helsley. His CSW% on the fastball is also up from 28.4% to 36.7%, 7th within relievers. This is all despite having below-average vertical movement, or rise, and velocity on his fastball.

Yet, this was not the only major change Festa has made to his arsenal. He completely altered his pitch usage, opting to use his best pitch, the sweeper, the majority of the time at 56%, and his 4-seamer at 43% of the time. The remaining 1% has been shared by his 3 curveballs and 1 measly sinker. By opting for a sweeper rather than a gyro-spin slider and using it more often, Matt Festa was able to turn around his career and the Staten-Island native will no doubt be a pivotal piece of the Mariner’s bullpen moving forward.