I have been a Mariners fan my whole (being cognitive of sports) life, as a 27-year-old the only memories of the Mariners being in the playoffs are of the video tapes my dad had from Eagle Hardware and Lowes, that I watched numerous times in my pre-teen years. And those teams were good enough. 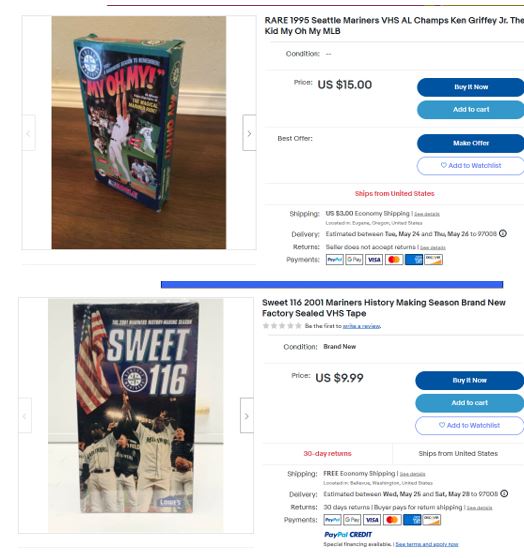 For $24.99 Mariners history can be yours

I remember the hope I felt that this was the Mariners year after Signing Beltré and Sexson in one offseason (Yes, Jerry you are allowed to sign 2 big name Free Agents in one offseason, who knew?) and my elementary school teacher letting us watch the home opener in class. I remember seeing the Cliff Lee trade come across on Sportscenter while watching the 15-inch tv my parents had in the kitchen during winter break and being filled with hope because MY team traded for a Cy Young award winner for players, I didn’t know anything about. I remember being aghast when Robinson Cano choose MY team over the Yankees of all teams (granted millions of more dollars will do that to a man). Maybe these moves would be good enough.

As I have aged, learned, and grown I begun to understand the complexities of baseball and building a team more and more. There are many ways to make a winning baseball team, but I will lump them into 3 generic paths: 1. You can just outspend everyone. 2. You can outsmart everyone. 3. You can out develop everyone. Some of the time one of those things are good enough to succeed in Major League Baseball. Over the course of my life the Mariners have had phases in all three paths ranging from middling success to absolute failures, which haven’t been good enough.

Rewind to this offseason, the Mariners are coming off a 90-win season that filled me and many others with something that has grown to be a little unfamiliar to Mariners fans the last decade(s), hope. Armed with Money, roster flexibility, veteran leadership, young players turning into solid contributors and budding superstar prospects waiting in the wings and what many considered best free agent class in years, Jerry Dipoto and the Mariners Front Office once again were making the pursuit of being good enough.

I probably spend to much time in the LL comments and Twitter, arguing interacting with others over the Mariners. The conversations range from how awesome Julio is to how one thinks the Mariners should be constructing their team to comments like "spending 140M on a player (Trevor Story) that is better than exactly one player on our opening day lineup is the definition of a bad idea". But a lot of these conversations can be boiled down to one question, what do you think is good enough?

Some will say outspending everyone and getting two, three or more marquee free agents is the correct path to being good enough. Some say outsmarting everyone by acquiring unheralded free agents and making shrewd trades is the correct path to being good enough. Some say you must out develop everyone and that is the correct path to being good enough. And they are all correct, or at the very least valid opinions on how to have a baseball team that is good enough.
But the great organizations, they can walk and more importantly stay on multiple paths.
I am not 100% sure what path(s) the Mariners are on but the last few off seasons they were certainly not on the "outspending" path. They seem to like to walk in and out of the paths of "outsmarting" and "out developing" paths with nearly as equal failures as successes that have not been good enough.
As the Mariners continue to fall in the standings and continue the pursuit of good enough. I implore the Fans, Front Office, and Ownership to instead of hoping and following a path(s) that is good enough is to push for following the paths to greatness and not accept anything that is merely good enough.