Logan Gilbert has provided a roller coaster of emotions thus far in his MLB career. Called up alongside Jarred Kelenic, the two have had severely divergent paths at this point, ultimately resulting in Kelenic’s return to Tacoma. Meanwhile, Gilbert is coming off his best outing with the big club, yielding just a handful of hits in his longest start to date. It took a number of turns through the rotation, but Gilbert is starting to look comfortable on the mound. The following are a few things I’ve noticed from his thus far.

That changeup! Look at how it just falls off the table! The first two in yesterday’s outing generated two ugly whiffs, with the third resulting a check swing infield single with an exit velo rivaling a SmartCar merging onto I-5. I seem to have been able to watch most of his starts, but I don’t recall ever seeing this pitch, which struck me as odd. Well, according to Savant, he has only thrown twenty-two of them to date, with nine of those coming yesterday. Further, he tossed nine of the variety against the Angels one start earlier. Hmm, it would appear young Logan is beginning to add it to his mix. And how are the overall results so far? Glad you asked: Opponents are whiffing at the offering 63.6% of the time! Obviously, he won’t maintain that rate of success, but the early results are very encouraging. Having used it exclusively against lefties so far, it will be interesting to see if he beings to throw it to same-handed batters.

Why is the pitch so effective? In a world of 90 mph changeups, Logan is going a more traditional route, with more than 16 mph of separation between his fastball and changeup. That should help him continue to generate a lot of bad swings on it. Much has been made of the extension that Logan generates with his frame, the amount of which varies with each pitch type. At this point, it appears the extension when throwing the changeup more closely aligns with the fastball than either breaking ball he throws (7.7ft on the fastball, 7.6ft on the changeup, and under 7.5ft on both breakers). On top of that, his release point with the changeup is closer to his fastball release than the slider and curveball are. All that adds to the confidence that the changeup can be a real solid offering and live up to that 55 FV grade it was given by Fangraphs in his prospect report.

Now what about that curveball? While given a 50 grade by Fangraphs, it seems to be his weakest pitch type so far, and he may even be scrapping the offering. After featuring it thirty-seven times total over his first three starts, the usage has dropped to just ten total examples in his last two appearances (and just two in yesterdays game). So the curveball is going by the wayside, and changeup is becoming more often utilized.

I had commented a bit ago that it appeared to me he was having trouble with the curve, and it seemed to stem from a difficulty with the timing of his delivery; his hand looked slow to get out of the glove at the top of his windup, leading to a lot of curveballs spinning in towards the top of the zone. While I can’t confirm whether or not my diagnosis was true, the results I was seeing appear to be. Look at this pitch type heat map. That’s a whole lot of curveballs missing up and in on right-handed batters, and I don’t think that is by design. 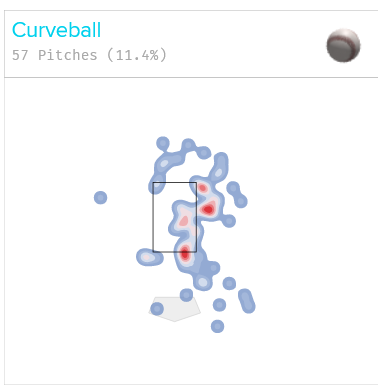 And look at this release point chart. Those purple dots are curveballs. 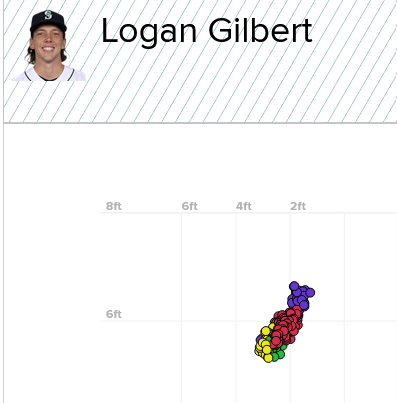 Yep, that is a pronounced difference. Major League hitters will pick up on that.

So where does he go from here? Presumably, more fastballs at the top of the zone, more sliders and changeups falling out the bottom, and maybe even a complete shunning of the curveball. Based on yesterday, that looks like it could be a recipe for success, and ultimately help Logan reach that #2 starter ceiling.