Greetings! It is the day of days. Eric Sanford here with your last installment of our Félix Week dive into the LL archives. We’re ending on a warm, comforting note with Jeff’s write-up of the press conference on February 13, 2013 where Félix signed the contract to more or less finish his career in Seattle. It was emotional!

I've watched a lot of baseball press conferences in my day. Or rather, I've watched parts of a lot of baseball press conferences, as I've always gone into them expecting them to be more entertaining and worthwhile than they are. I mean, if you're going to watch someone sit and speak in front of a microphone, you're committing to it, believing that it'll be worth your time. They so never are.

This one was. Wednesday afternoon, Felix Hernandez and Jack Zduriencik sat at a table before media at Safeco Field, and they discussed Felix's long-term contract extension, made official earlier, on camera. We knew that Felix and the Mariners were making a seven-year commitment. Here's Felix putting that commitment in ink.

So simple, so symbolic, so the best thing I've watched in months, and lately I've been re-watching Breaking Bad from the beginning to get prepared for the summer. There's nothing unusual about a player signing a contract -- a player must sign every contract -- but, somebody save that pen. Send that pen to the Hall of Fame, and put it in a Mariners hat.

I've never been happier to have watched a press conference, and while I know I'm biased on account of the Felixness of it all, I was already pleased with the details. The conference actually made for good, gripping viewing, as Felix displayed a whole range of emotions. There was passion, and there was fire, but before that, there were tears. And not because Felix turned around and saw the logo on the backdrop and had it dawn on him what he had just done to himself. 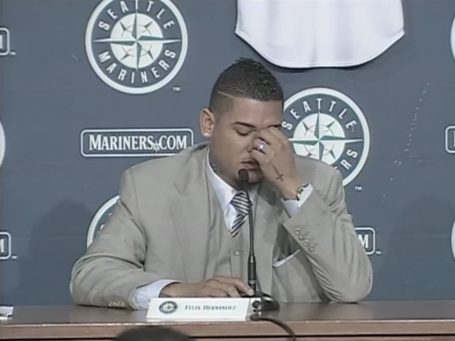 It was everything you'd want in a Felix Hernandez press conference. It was compelling, it was reassuring, and it was heartwarming, stirring. Before Felix started talking, I made a note about how Jack Zduriencik spoke glowingly of the commitment made by both Chuck Armstrong and Howard Lincoln. On a few occasions this winter, Zduriencik has praised the people above him, which is interesting, given how those people are perceived. I was going to expand on that, but now I'm not going to -- there's more to discuss. Let's talk about why this press conference was so perfect.

(2) Clean bill of health
There were hints the other day that the Mariners introduced some protective language into the contract, after spotting something in Felix's MRI. They very well might have, but it wasn't discussed, as the Mariners don't talk about terms. What was made abundantly clear is that Felix is fine and as healthy as ever. Zduriencik said he was reassured by the medical staff that this is a pitcher worth committing to. Felix, for whatever it's worth, denied that anything is awry. Felix has been looked up and down, from every angle, on the inside and on the surface, and the conclusion reached is that Felix looks amazing. There are no major concerns about his health, and Felix works hard to keep himself healthy. Felix took responsibility for controlling his own health, and to date, what reason do we have to be skeptical? To date, Felix has been healthy, and his physical didn't actually raise significant red flags. Felix is good to go.

(3) Emotion
Felix just signed the biggest contract ever given to a pitcher. I saw some remarks on Twitter about how anyone would be moved to sign such a contract, and Felix probably didn't care much about the "Seattle" part. If you watched the conference, you know a lot had to do with the "Seattle" part. If you watched the conference, there's simply no questioning Felix's devotion to the city and the team. You might question why he feels such devotion, but there's no question that he does.

Before Felix got talking, he had to compose himself, as his eyes welled up. As his voice occasionally cracked, he talked about how much he cares about the place, and how much he appreciates how good everyone has been to him. He talked about Seattle and the Mariners the way one might talk about a loving spouse and family, and on several occasions Felix joked about working on a new extension for after this one. Felix loves where he is, and given his druthers he'd never leave. Felix, at least at this point, intends to be a Seattle Mariner for life.

Felix had tears in his eyes as he talked about the meaning of the city of Seattle. Then he shifted into talking about the team, and the organization's direction, and then he was just spitting hot fire. On paper, it means nothing for a player to express confidence in his employer. That comes as a part of every long-term contract ever signed. But Felix didn't just say he believes in the Mariners' future. He almost shouted it through clenched teeth, coming off as borderline evangelical. A thing they say about Eric Wedge is that, when you hear him talk, you want to run through walls for him. Felix's words were stirring, like those of a motivational speaker, but a motivational speaker who truly believes what he's saying. Somehow, someway, the Mariners have Felix convinced that better days lie right ahead. Felix has been through what he's been through with this team, and he just signed a seven-year contract extension to remain in place. That right there tells you what you need to know about his feelings.

After the tears, after the passion, the mood got lighter, although Felix's eyes welled up one or two more times. Felix is, as we've long known, an emotional guy. We see it all the time on the mound, but today we saw it in an interview room. All the usual risks still apply, and a press conference does nothing to change the fact that a contract like this for a pitcher is an incredible gamble, but I couldn't possibly feel better about things. I was already excited about the extension, but the conference only lifted me up even further. I have the clearest understanding of how committed Felix is to being the face of this franchise, and in so many regards, he's just the perfect player. He's the perfect icon. He's the perfect guy to lock up and keep forever.

Felix belongs to Seattle. Seattle belongs to Felix. These days, a lot of marriages fail. I've got a good feeling about this one.