Daniel Vogelbach was fine when the Mariners visited Toronto for a three game series in mid August. He had two hits -- one of them a double -- and drew four walks. That was good for an .875 OPS in 12 plate appearances.

Vogelbach swung at just 32.1% of pitches he saw that weekend, and chased only one of the 15 pitches clearly out of the zone.

But of the 14 pitches Vogelbach saw in the "heart" of the zone, he let nine go by for strikes, including six in "zone five" -- basically right down the middle. And they weren’t huge benders or sweeping sliders that fooled him; all nine pitches were classified by Baseball Savant as fastballs (four-seamers, two-seamers, cutters or sinkers).

Four of the pitches came with Vogelbach ahead 3-0 or 3-1. One was a 96 mph fastball right down the middle from Wilmer Font for a called strike three.

The series was on par for Vogelbach in 2019. It furthered a season long trend in which he’s posted the lowest swing rate in MLB (34.6%), and limited pitches chased out of the zone among the league's best (22.6%).

But it also highlighted his unwillingness or inability to swing at the most hittable pitches.

Vogelbach has seen 515 pitches in the heart of the zone, and he’s declined to swing at 222 of them. Only three players in MLB have watched more.

Baseball Savant does not allow isolation of swing percentage on balls in the heart of the plate, but called strikes in the heart account for 10.1% of all pitches Vogelbach has seen this year (11th highest in MLB).

That’s not ideal, especially considering few players in MLB crush meatballs like Vogelbach. When he swings at pitches in the heart, his .461 wOBA just breaches the top quartile in MLB, as does his .441 xwOBA.

When he swings at pitches outside of the heart of plate, Vogelbach is among the league’s worst. His .195 wOBA is in the 13th percentile on those swings, and while his .213 xwOBA (36th percentile) suggests he’s gotten a touch unlucky, it’s clear his damage is done on pitches in the heart. 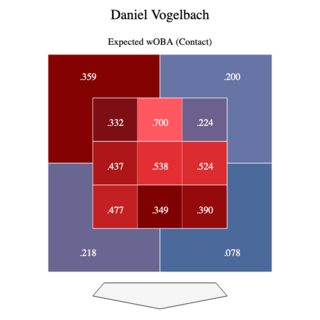 His approach is unique.

Per pitch seen, Vogelbach has put the second fewest balls in play in MLB. By rarely swinging, he maximizes walks and minimizes the amount of contact he makes on pitches he can't hit well. He compensates for this by carefully selecting and then crushing pitches in the middle of zone.

And on the whole, its mostly worked.

The inclination to all but entirely shoulder his bat is the driving force behind a 16.4% walk rate (7th in MLB) and has allowed him to post a solid .348 OBP. Add in 29 home runs and .252 ISO by mashing center-cut pitches and that’s good for a 120 wRC+ despite striking out 25% of the time and posting the second worst batting average in baseball.

He's one of the most severe three true outcomes hitters in MLB.

But clearly Vogelbach has struggled to hit since representing Seattle in the All-Star Game. In the first half, he posted a 137 wRC+ (19th best in MLB). Since the break, he’s posted a 70 wRC+ (12th worst in MLB).

Scott Servais talked recently about Vogelbach to Ryan Divish of the Seattle Times:

Manager Scott Servais believes it’s the league adjusting to Vogelbach and his approach at the plate.

"The league adjusts and they start throwing you differently," Servais said. "If you don’t stay really disciplined to who you are and you try to adjust, maybe get away from your strengths, then all of the sudden it starts going in the other direction."

Servais was still optimistic even with the struggles to adapt.

"Vogey will get out of it," he said. "Vogey can hit. He knows the strike zone. Those things haven’t gone away. Its’ tough for him. He’s never struggled like this before. He’s hit at every level he’s ever been at. It’s tough."

I can’t conclusively say either pitchers or Vogelbach have adjusted much. The pitch mix and location in the second half are pretty much identical to what he saw in the first half. And the variation in his plate discipline numbers are nominal.

No, it’s Vogelbach who is no longer exactly perfect within his approach: 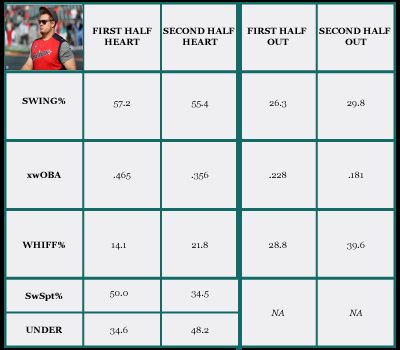 Clearly data visualization is not my thing. Basically the table shows that while Vogelbach’s pitch selection is slightly worse, it's the contact he’s making (and isn’t making) within his approach that’s contributing to his slump.

His exit velocity on "heart" pitches before and after the break are nearly the same (93.9 vs. 93.8), but he’s getting under a lot of hittable pitches, rather than driving them between 8 and 32 degrees like he was before. He's lost the ability to consistently generate power that previously compensated for a lack of balls in play.

And significantly worse whiff rates have shrunk his 0.77 first half K/BB to 0.39 K/BB.

I don't think it's fair to judge Vogelbach's booms and busts independently.

With such a small sample of swings, each ball he puts in play carries more weight than just about any other player in MLB. His walk-focused, swing-averse approach is dependent on high quality balls in play.

That was fine in the first half when Vogelbach was perfect. He made excellent contact with hittable pitches on the rare occasion he swung. But while his plate discipline numbers have remained mostly the same in the second half, he’s been more prone to whiffs and poor contact.

I'd guess Vogelbach's contact on pitches in the heart is somewhere between perfect and average. He probably can't crush half the center-cut pitches he swings at, but he probably won't continue to pop out as much. The view of the full season seems like a good measure of true talent.

He would likely benefit from swinging at more of those hittable pitches, rather than forcing walks. His excellent chase rate might be partially tied to his reluctance to swing even at good pitches, but sacrificing some points on his K/BB ratio is probably fine if he added more total bases. And even if his contact isn't as perfect as it was pre-break, if there is simply more of it, there would be less reliance on perfect contact and maintaining an elite K/BB.