Here's an awesome FanPost from Ryan Blake all about one of the Mariners' brightest stars from the first half.

Omar Narváez went 4-for-4 with two home runs Sunday against the A’s to cap a remarkable first half. To put it in perspective, his performance in that game alone was worth about 0.4 fWAR; Alex Colomé, who the Mariners traded to the White Sox for Narváez, has been worth 0.4 fWAR all season.

Narváez has not been the hitter he was in 2018. He’s been less patient, swinging at 5% more pitches out of the zone and making less contact. Deliberate or not, the new approach seems to be working, and he’s been decidedly more productive at the plate.

An uptick in power has propelled Narváez to a 132 wRC+, third among catchers and 35th in MLB (min: 250 PA's). Narváez’s ISO is up nearly 40 points, more than compensating for a slight decrease in walk rate. His 14 home runs are the most by a Mariner’s catcher before the All-Star Break in franchise history. 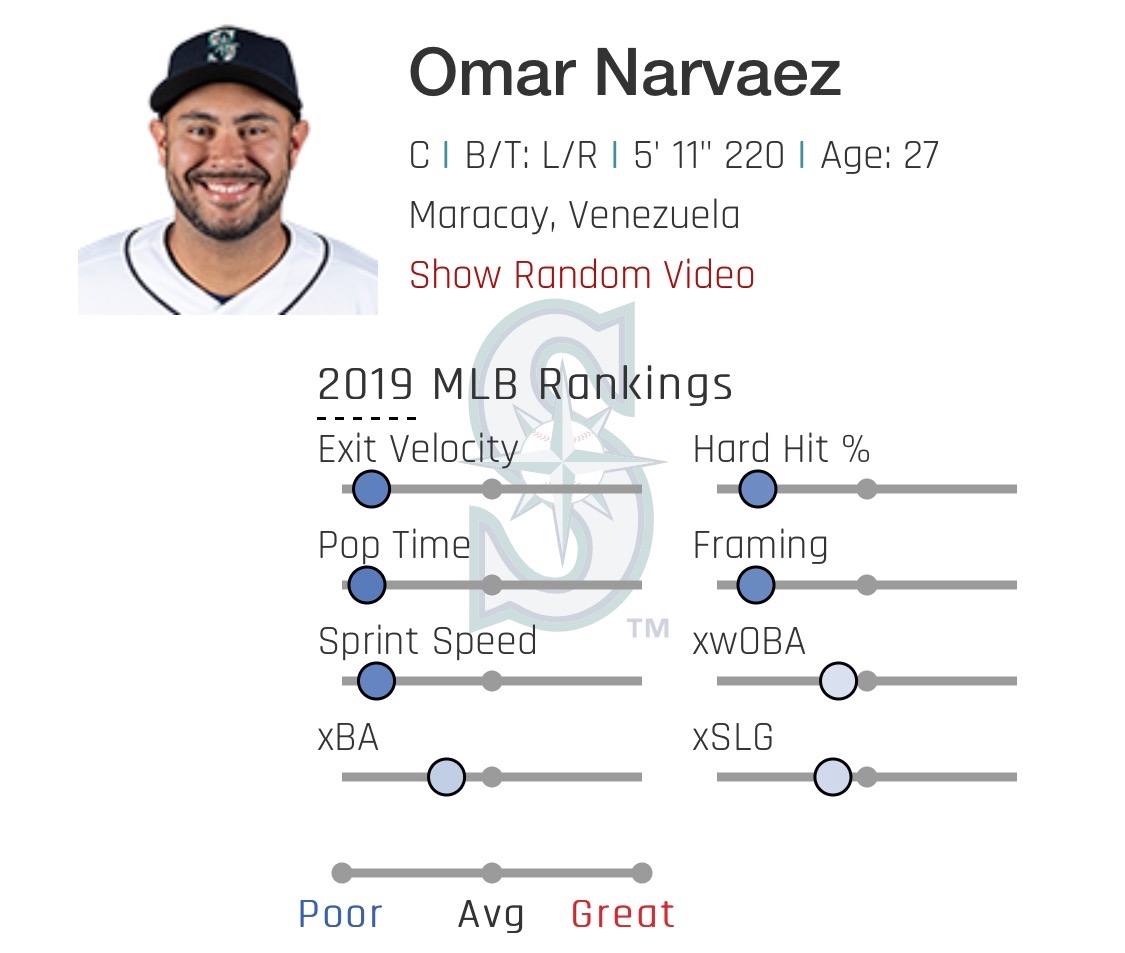 His 30.4% hard-hit rate is among the worst in the league. While not necessarily indicative of performance, his 85.5 mph average exit velocity is in the 10th percentile. His expected SLG (.410) has struggled to stay consistently above .400, and was .357 as recently as July 6. Regardless of what you think of Narváez, he’s not hitting the ball particularly hard.

There's a stark contrast between his .364 wOBA and .323 expected wOBA. Only 21 players have outperformed their expected numbers more than Narvaez (6th percentile; min: 100 PA's).

With xwOBA, outcomes are replaced with quality of contact measures, such as exit velocity and launch angle. It seeks to more accurately gauge a player’s ability by removing uncontrollable factors -- e.g., luck, defense -- from the equation.

And nowhere has xwOBA dinged Narváez more than on home runs.

Of the 159 players with at least 10 home runs, Narvaez’s home runs average 100.8 mph, the sixth lowest exit velocity in MLB (three of the players below him hit in a joke of a stadium).

Only five players have a shorter average home run distance (again, three of them hit in a joke of a stadium).

But just three players have hit their home runs with a higher average launch angle than Narváez, and it’s fine company to be in.

Here’s the most extreme instance:

Pitches he's turned into home runs have been among the most inside in MLB: 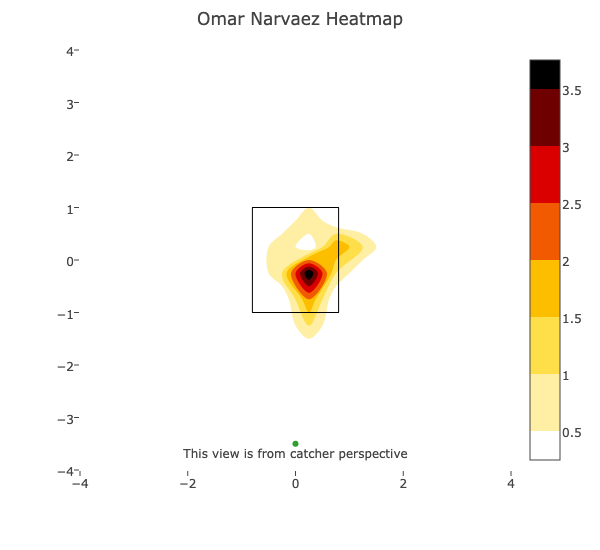 It's clear that he has "his pitch," and when he gets that ball -- inside and just below the belt -- he’s been able to loft it just beyond the wall in the right-centerfield power alley. 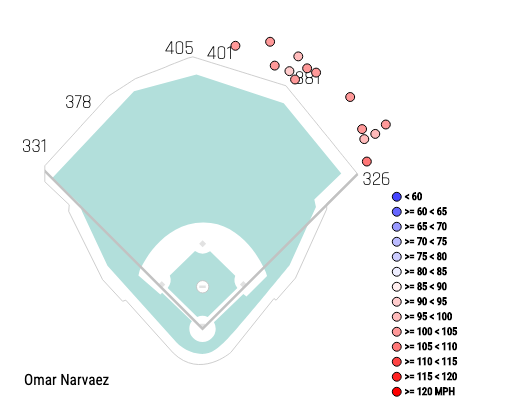 A home run is worth 1.933 wOBA; Narváez's xwOBA on home runs is 1.039. That's a major factor in the discrepancy between his actual and expected production.

There’s a long conversation to be had about the effect of the baseball. It seems Narváez has benefited more substantially than others from a ball that travels farther. However, a few anomalous home runs does not make a .294 hitter. No, this is the driving force behind Narváez in 2019:

Here are all of his hits this year, sorted by quality of contact: 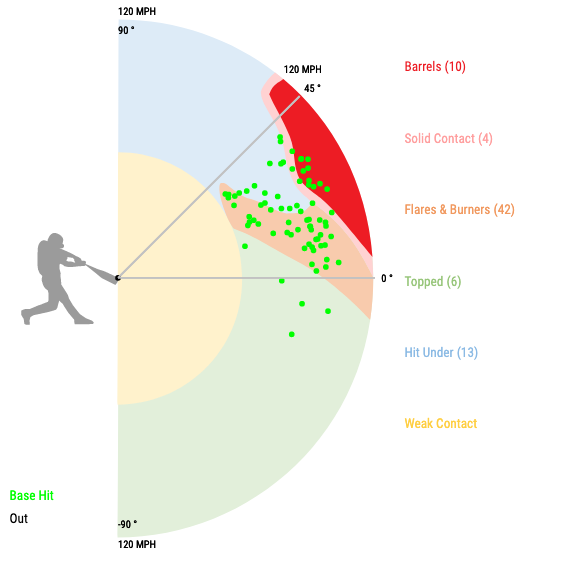 Flares and burners -- but mostly flares -- make up a significant portion of Narváez's offensive profile, and he's hitting .764 on contact within that classification (90th percentile).

Here's a look at his zone heatmap on flares and burners, including hits and outs: 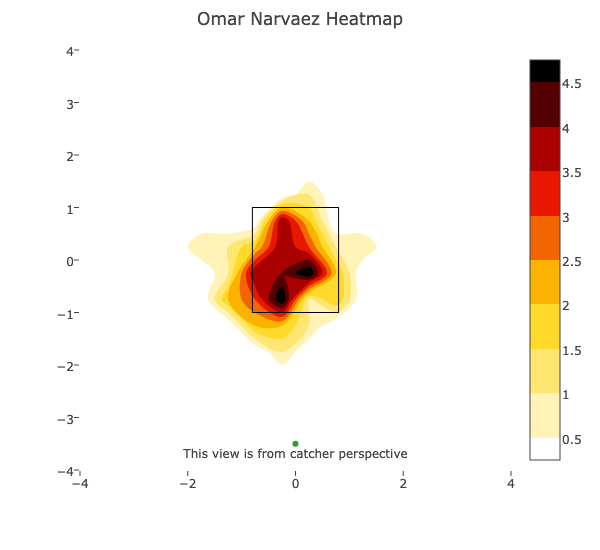 And here is where those balls have landed: 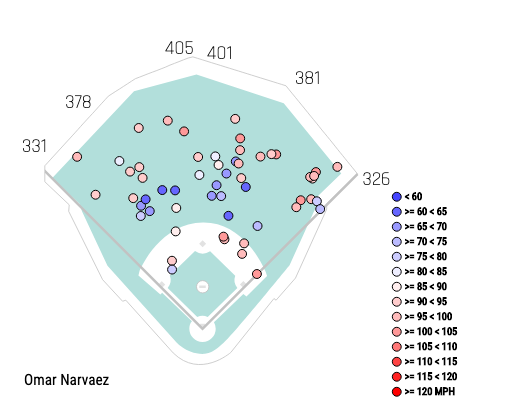 Impressive. He’s covered the entire zone and placed bloop singles all over the field at will.

What’s concerning is his expected batting average on those flares is .684, which suggests he’s due for some major regression. Expected stats don’t take into account direction of hit, and Narváez certainly deserves credit for being unshiftable, but a study from Fangraphs suggests performance on flares and burners is not necessarily repeatable.

Still, Narváez has reduced his groundball rate from 42% in 2018 to 30% in 2019 (14th lowest in MLB), providing hope he can maintain a recognizable level of production.

That’s the thing about Narváez -- his launch angle is nearly perfect. 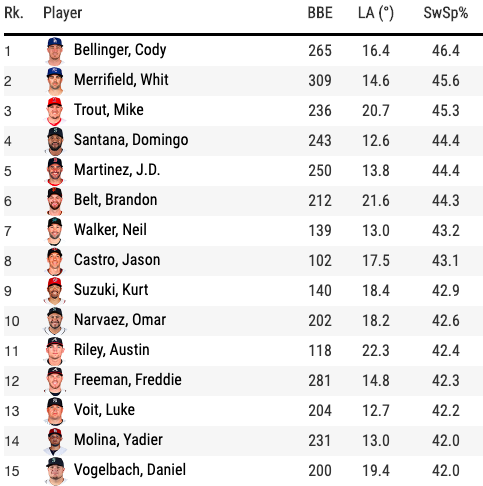 The "sweet spot" is a classification for balls hit with a launch angle between eight and 32 degrees. Balls hit in that range -- regardless of exit velocity -- have an average wOBA of .732 this season.

Narváez has a wOBA of .625 on balls in the sweet spot -- below average but not bad considering he’s hitting about as hard as Dee Gordon.

The approach is interesting but simple, and seemingly an exercise in math. He elevates as many balls as possible to all corners of the field that enough drop in, all while sitting on the pitch he can occasionally poke into the stands. Maybe he’s gotten a bit lucky, but his approach allows for the most luck possible.

The "fly ball revolution" is often synonymous with players like José Ramírez, who begin crushing home runs after raising their launch angle. But it's clear that "weak" hitters benefit from hitting the ball in the air, too. Narváez has found a way to mitigate his inability to hit the ball hard, and it's helped him produce among the game's best.