Since the Seattle Mariners have been around since 1977, there's a wealth of members of the franchise that would certainly be able to help a college football team. And if there's one thing my chronically hopeless WSU Cougars need, it's help.

Maybe Tre Griffey's dad would've been a good fit as a WR in the Air Raid offense? Or maybe Randy Johnson throwing heaters to various WR and RB? Or Ken Phelps because apparently 70's/80's mustaches are now an important part of our team identity?

With UW's reliance on a solid ground game--and feeling more than a little irritated after seeing Gaskin just run the counter over and over again without fail--I thought about the idea of adding a strong hitting safety like former USC Trojan Al Martin who was perfectly willing to take on a punishing running back:

"For some reason, probably because I was young and dumb, I decided I could make a head-on stop of Leroy Hoard," Martin said. "I hit him, or rather he hit me. You remember those big tree-trunk legs Hoard had? That’s what hit me."

That sounds amazing! There was only one small problem:

Despite a story he has perpetuated for at least 10 years, Al Martin appears not to have ever played football at USC.

When asked about the discrepancy a month ago, Martin told The Times he would provide proof the next day. That has not happened, and Martin has had no further comment on the record.

But I'm going to go in a different direction. A non-player direction.

Back in '07, the Mariners were playing a road game in Cleveland. Cleveland doesn't believe in the idea of a "roof" so the game was played in a series of snow flurries.

Literally one strike away from reaching an official game, strident hero Mike Hargrove successfully argued that the umps should call the game because the hitter at the plate wasn't seeing the ball well. Whether that was due to the snow or because the batter was Joe Lopez was hard to say, but the argument worked regardless.

Hargrove got an assist from the Indians' manager who came out to argue Hargrove's arguing, which only allowed the weather to become worse and improve Hargrove's point. What a fool! I wonder what ever became of him after the Indians moved on? 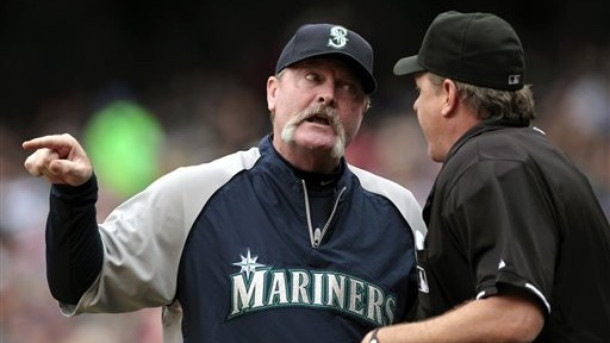 But let's go back to Hargrove. So you're telling me there's a coach who sees the impact the snow has on his team, knows a loss is imminent, and finds a way to adjust?

Yeah, give me that guy.