With Taijuan Walker's fastball still scorched in our memory, Brendan and Nathan talk it out, and try to imagine what the future may hold.

Two days and a full game later we still aren't done thinking about Taijuan Walker's Monday start. I asked Brendan Gawlowski, staff editor and regular over at Baseball Prospectus, to talk a bit about where Walker is, where he might be going, and what we think he needs to do to fulfill his obviously huge potential.

NB: So, you mentioned to me (before Walker put the Astros in 7 innings of the Cruciatus Curse Monday night) that Tai looks "different". I assume you mean even in relation to his highly effective late season 2015 form. Are there one or two things that stand out to you?

BG: Yeah, there are a couple that stand out. First though, the difference between now and early last season is just night and day. He wasn't throwing strikes, he was a two-pitch pitcher, and his slider made even Hector Noesi smile. Throughout the year, even as he started trusting his curve more, and started throwing more strikes, he didn't consistently have a swing and miss pitch.

This year, the whole arsenal ticked up. The slider is still his worst pitch, but it flashes average or better when he locates well. He can throw the curve for strikes and it just destroys a hitter's timing. And the changeup is a knockout too: the ones he threw to Springer and Correa? Good night. You can't hit a pitch that drops like that when it travels 90 mph. Even his velocity is up.

NB: There was one change in particular, I think the one to Springer you referenced, that stood out to me not just with the pitch quality (which was excellent) but also the courage it took to throw it. The Astros, as much as we are enjoying their current misery, have plenty of scary bats; hitters happy and eager to crush mistakes. Walker's change only works well when it's thrown low in the zone. He controlled and deployed it so well last night. I don't remember his pitch mixing being so good, even late last season.

It sounds cliche but it feels like a young guy with great stuff learning how to pitch.

BG: There was one pitch yesterday that really embodied what you were talking about. In the top of the fifth, with the M's up a run, Walker had a 3-2 count on Valbuena. He'd thrown a lot of fastballs, and so he needed to mix it up, but he also couldn't throw a cookie, or gamble on getting him to chase out of the zone: you don't want to walk the eight hitter in a one run game as you're about to face a lineup a third time. Instead, he executed a changeup really well, leaving it in the zone, but in a place where Valbuena couldn't do more than slap a grounder to Cano. It was really good execution, and that's another thing that he didn't always have in the bag last year. Was there another example like that that stood out to you, either this game or earlier in the season?

NB: Actually it was the next time Valbuena was up in the seventh. Similar situation with Walker at the end of his pitch count, 2-2 count, and Valbuena fouling off tough pitch after tough pitch. You don't want to miss and go 3-2, and put yourself in the same situation you just described. Also he still had that great fastball (he had it all night really). Instead he went 2-2 curve and he threw in the strike zone but down. Poor Luis missed it by a foot and a half. 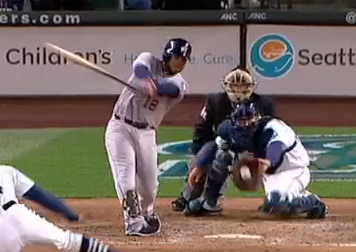 BG: Poor Luis. Actually, after last season, I'm out of ‘poor Luis' but that's besides the point.

NB: Anyway, we've talked in the past about how Walker's dependency on elite velocity profiles him as a Firecracker: "Burns fast and bright." Does this improved, 2016 version look like someone with a higher ceiling to you, a longer peak, or both?

BG: I'll get to your question specifically in a second, but I want to address the firecracker point first. Taijuan is still very reliant on his velocity to succeed. All else being equal, a pitch thrown harder is better than that same pitch two mph slower. This is especially true when you don't have a ton of movement on your pitches, as is the case with Taijuan's change and his slider/cutter thingy. Those pitches are only effective because they move *at 90 mph*. Throw them slower, and you'll see fewer people chasing them, the velo band between fastball and curve shrinks, and the whole package becomes less effective.

Getting back to the question itself: the ceiling still looks like a No. 2, and it certainly looks like he's more likely to achieve it than he did last year. In the long run though, I'm still concerned about how he'll respond when his velocity dips, as it does for nearly everyone. Never say never in this game, but the odds are overwhelmingly high that he's throwing as hard as he ever will as a big leaguer right now.

NB: Brendan why do you hate Taijuan Walker?

BG: I love Taijuan Walker. Do you share any of those concerns?

NB: I do, yeah. And, while it's a bit unfair, I worry about not just Tai having success but which lessons he learns from that success. He had his very, very best stuff last night. The fastball averaged 96.2 MPH, which is almost Eovaldi/Syndergaard territory. Part of what makes Felix so great is his ability to grind through with his B and even C game. There will be plenty of nights when Tai will be in a tough spot and have to reach back for something and find that 97/98 isn't there. What he does at that point will be huge for his career length.

BG: Definitely still learning how to pitch. In a way, his 97 and 98 mph fastballs serve as very forgiving training wheels. It's also worth mentioning that the Astros are skidding and strikeout prone, a combination ripe for a guy like Walker who gets to work with his best stuff. I'm not discounting his outing: not at all, and he's certainly pitched well outside of that start. But Kansas City comes to town this weekend, and he'll start over the weekend in a game that will present an entirely different kind of test. What are you looking for in that game?

NB: Just do what Mike Montgomery did last year, shut them out, strike out eleven, etc.

BG: Good thing Mike is still around to teach him how to do it.

NB: No, I think you're right, he'll need to be composed with runners on, and continue to make great pitches when they count, because the Royals are going to put guys on and try to screw with you and cause havoc. In many way perhaps the most exciting part of last night's start was him bearing down and grinding through Springer/Correa without allowing a run in the fifth with runners on second and third in a one run game.

A huge part of being a major league baseball player seems like trying to teach a world class athlete who has only known utter dominance his entire life to deal with stress and failure while maintaining confidence. Call it "grit", call it "competing" or whatever you want. It feels like a skill. Granted one we can't quantify. Walker will need to show it against KC, because they sure as hell will bring it at him.

BG: There's certainly plenty of fire in him. He stared down a couple of hitters last night, but there's a better example from one of his last Triple-A games. He was facing Iowa, and they had a good team and hit him pretty good. Jorge Soler took him real deep to right field and Taijuan got pissed: you could almost see him snorting on the mound. Sure enough, the next pitch was a fastball in the ear, and one of his harder ones of the night, too. Clearly there's a lot of desire in him, and it's on him (and to a lesser extent, Iannetta and the coaching staff) to channel that energy into something positive.

NB: I think to that point you saw it perfectly in the last at-bat against Colby Rasmus, who is as "Country" as they come. He's on fire too, the reigning American League Player of the Week. Walker had him 1-2 and absolutely blazed a fastball that could have nicked his armpit hair if he hadn't moved. Next pitch was the same heater about seven inches lower, and Rasmus took a helpless emergency hack.

That's a good use of fire.

BG: Also threw one up and in to Altuve early on

NB: Well he could have been trying to throw one at the knees for all we know

BG: Jose got him back later too with that double to left. Good baseball all around Monday night. Except for from the rest of the Astros, who are in last right now, if you hadn't heard.

NB: By Zeus' Beard, Brendan, you are right.