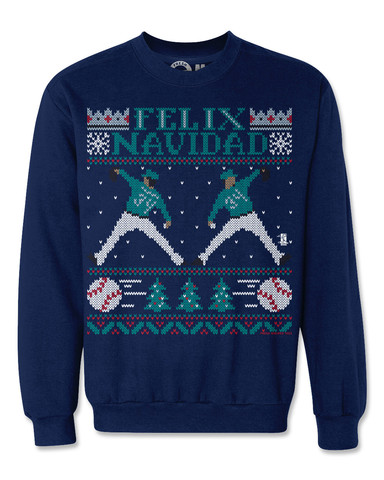 Twas the night before Christmas, and in Mariner Nation
There were quiet feelings of anticipation
The commemorative K cards were all stashed away,
In hopes of using them again every five days.

The children were nestled all snug in their beds,
While visions of perfect games danced in their heads.
And mamma in her Seager jersey, and I in my bear hat,
…sorry, lost track of what I was saying. Bear hat. Bear Hat. BEAR HAT!

Throughout Lookout Landing and Twitter there arose such a clatter,
I drove over to Safeco to see what was the matter.
Onto the concourse I shuffled like a doof,
Stood next to Dave and opened the roof.

The bright full moon on the well-maintained grass
Cast illusory shadows of great players long past.
When, before my eyes who did appear mysteriously,
But Jerry Dipoto. (Does he ever take a day off? Seriously?)

With no transactions in the last three days made,
It wouldn’t surprise me if he’d finished another trade.
More rapid than eagles his new team they came,
And he whistled, and shouted, and called them by name!

"Now Kyle! now, Cano! now, Felix and Nellie!
On, Guti! On, Kuma! on Aoki and Wiley!
On Benoit! And Karns! Martin and Aro!
Cishek, DeFratus! Karns and Powell!"

I wasn’t too sure about mid-winter calisthenics.
Perhaps this was how they maintained on-base percentage?
Anyway, to the retracted roof-top they all quickly flew,
(He rebuilt with a depleted farm; why not this too.)

And then, with the fanfare of that familiar sea shanty,
I heard the clatter of footsteps behind me.
As I lowered my head, and was turning around,
On the concourse the GM appeared with a bound.

He was dressed in M’s gear, from his head to his foot,
With occasional co-branding by Fox Sports and ROOT.
A bundle of Players he had flung on his back,
And he looked like a peddler, just opening his pack.

His eyes-how they twinkled! his dimples how merry!
His cheeks were like… um… heh, ok enough about Jerry.
His droll little mouth was drawn up like a bow,
And the pack had a sign: "everything must go!".

He spoke so clever, so confident, so swift,
It took a few minutes to fully catch his drift.
He was trying to trade with ME! He wanted a reliever!
For a cup full of nog, and a Reindeer to Be Named Later!

He was relentless and thorough, a determined little elf,
And I laughed at the offer, in spite of myself!
He was looking to deal! For players! For perks!
I told him very kindly, "…that’s not how Christmas works."

He spoke not a word, but simply smiled wide,
And filled the remaining holes using players with upside.
All the athletes departed, cheerfully and casually
How’d they all get home? Via a walk, naturally.

But I heard him exclaim, ‘ere he left with the rest,
"Happy Christmas to all, and see you at FanFest!"