The Mariners have reached the point where nothing matters but the next day's outcome. We're all in love and that is ok.

A) Fervent love. That's the best way to describe how I feel about Michael Saunders at this exact moment. Almost two months ago Michael Saunders, born and raised in a country that prizes hockey first, second and third and baseball somewhere below curling and slightly above mogul skiing, took a check swing. He grabbed his back and got back in the box.

Michael Saunders, 11th round draft pick, 333rd pick in the 2004 draft, former top 100 prospect, former major league washout, guy who had to leave the the organization's instruction, seek out independent counsel from Ben Davis' Josh Bard's (!?) brother to relearn how to hit in the offseason. Outsider slung with verbal stones and arrows as he trained with rubber bands and pool noodles. Odd ball, outsider, weirdo, foreigner. A man forgotten as Dustin Ackley miraculously  resurrected his career and, of all quasi-alive humans, Endy Chavez provided key outfield play.

After that injury July 10th Saunders rehabbed in Tacoma. His time South saw the birth of a child and a debilitating illness that stripped him of 12 beautiful, I presume chiseled pounds. He stayed the course. He fought. Is this too narrative driven for you? I do not care. I write what I saw tonight in Michael Saunders' eyes. Tonight Michael Saunders, in his first game back in the big leagues, to a place he was never meant to make let alone retake walked twice and singled. In the 7th, clinging to a 1-0 lead Michael Saunders made a play I doubt any other current Mariner makes.

While the game was eventually tied Saunders' heroic defense served to inspire, well, myself at least. But in the bottom of the 8th Saunders buttressed his defense with an essential walk: 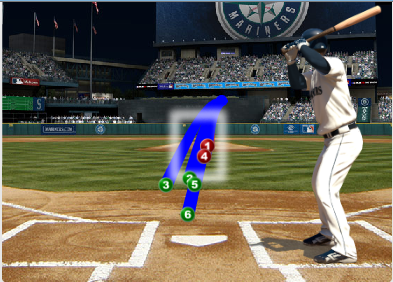 In my current state of extreme tiredness I'm having a difficult time summoning the proper words for expressing the admiration I feel for Michael Saunders' performance tonight. A person has only so many opportunities to perform on the biggest stage of his/her life. If Michael Saunders had gone 0-4 tonight with a misplayed flyball no one would have blamed him. For one night he was the Condor we imagine and believe him to be, an impossible wide-spanned creature of unimaginable majesty, casting a shadow over whatever he was near. Tomorrow he may be benched for Endy Chavez, the day after he may be benched for Endy Chavez. Michael Saunders cannot write the lineup. But when he plays our favorite Canadian corner outfielder proved that while healthy he is ready to lead this team towards its current, improbable landing spot, which is the DAMN PLAYOFFS if you weren't paying attention.

B) James Jones is a bad hitter. You know this. I know this. At this point I bet James Jones knows that at his current ability level he is no match for quality big league pitching. What he is is fast and good at stealing bases. In that same, glorious 8th inning there was a Mike Zunino Walk (tm), an outcome as unlikely as a James Jones hit. When Jones pinch ran for Zunino he stole 2nd. After Saunders' walk he stole 3rd, forcing the Houston defense to a man to creep closer in an attempt to play the play at he plate.

On his own James Jones has reached base 88 times this season. He has now stolen 25 bases, meaning that Jones has grabbed an extra base every 28.4% of the time he has been reached base. He's most likely never going to be more than a 4th outfielder (he's less than 2 years younger than Michael Saunders!) but his speed is the kind of asset that keeps people on a roster in the postseason, which the Mariners are currently on pace to make by the way. With 19 games remaining.

C) Felix was a middle ground between his last outing and his preceding 3. 6 IP, 4 BB and 8K. To my eye and to the numbers there is little reason to think Felix is at his stride. Shannon Drayer has commented that the amount of ice on his back may portend a discomfort. But back discomfort is not an arm injury, and Felix is nothing if not a legendary competitor. We may want The King full pace for the postseason. We may not get that. But he is, barring an epic collapse going to win his 2nd Cy Young and may be a key part of the Mariners 1st playoff team since I could legally buy alcohol, which was a long damn time ago. Felix at this point of the season is equal parts amazing stuff and pure moxy. Both deserve equal respect and admiration at this point. Carrying a franchise for 8 years is heavy work.

D) Brad Miller, 2nd half of the season: .258/.342/.484. The 1st half of 2014 will always haunt Miller as part of his sample size but tonight he provided all the offense the Mariners would need, driving in 3 with a single and a huge, albeit misplayed tie-breaking triple in the 8th. I still haven't gotten over watching Miller spend 300 PA as a useless offensive player, much like I haven't gotten over Dustin Ackley spending 2+ years as a useless offensive player. There is reason to think struggle lie ahead for both (HI JUSTIN SMOAK!). But for now, for this season all that matters is their current effectiveness last a few more weeks. For now, I believe in Brad Miller. Sure. Because my belief/disbelief has no effect on reality and I'm through doubting this team can do this.

E) At the trade deadline the Mariners and A's were separated by 11.5 games. After today: 1. Game.

I don't blame the fans for the poor attendance (but seriously try to go). I get everything that keeps attendance down: Fear. Pain. Scars. Distractions. Family. Work. But the main person missing out right now is you if you don't go. One thing I know, and have said since early this year: If this Mariners team gets a home playoff game, with this city fresh off the leaching of pain that was Super Bowl XXXVIII XLVIIIwe will re-calibrate what baseball considers home field advantage. We will shake Safeco to its core. Dave will hear us, and he will smile.