After Mariners pass test, it's fans' turn – is baseball back in Seattle?

Share All sharing options for: After Mariners pass test, it's fans' turn – is baseball back in Seattle?

I've always thought Seattle was a baseball town. I've believed that, despite cyclical obsession with the local football and basketball teams, in their hearts, the people of this city always loved baseball the most—and the city's ability to be so incredibly down on the sport came from the same place that would allow its passion to reignite at a moment's notice.

I have no reason to think this.

So I've always thought that if the Mariners returned to some of the glory we saw in those early years, made a playoff push down the stretch, fans would turn out in droves. There's time left, but so far, we haven't seen it, at least not to the levels I'd once hoped for.

After all, the scorned lovers who'd sworn off the Mariners for years have always said that if the organization managed to field a winning club, they'd come back. It's taken time, more time than anyone of us would've preferred, but the Mariners have done what was asked. No one's asking you to throw down for season tickets—actually wait, that's not true—but still, it's your loss more than anyone else if you're deliberately missing pennant race baseball.

Now, I should be fair, attendance has gone up to a degree—and a pretty strong one. The Mariners actually rank second in the league in attendance growth, trailing only Milwaukee. They're up nearly 2,600 per game, which is an improvement over when they ranked fourth back in June.

Though the attendance is improved, and more improved than almost everyone's, it's still not great. Overall, the Mariners still rank 22nd in the league. They're drawing about the same as Oakland and Arizona.

This growth comes on the back of some big weekend series, a number of which include events and giveaways. In my mind, if you're looking to see if attendance is improving to levels commensurate with the current success of the team, it's best to look at how they're faring when it isn't the most convenient to attend—when there isn't a bobblehead, a t-shirt or anything else luring them to the games. Basically, how are they doing on weeknights?

Well, so far in 2014, they've yet to draw more than 30,000 on a weeknight in any game that wasn't in the Toronto series, or on Macklemore bobblehead night. Spurred by corporate events and others just taking long lunches, they've had a few weekday games exceeding that total, but save for those special occasions, there haven't been any normal weeknight games exceeding the 30K mark. Even stepping out of those specific parameters, and I'm aware Labor Day complicates things somewhat, the recent weekend series against the Washington Nationals didn't have a single game that exceeded 2005's average. Again, that team lost 93 games.

But getting back to the weeknight games, I'm curious to see how this changes down the stretch, as I'm almost certain it will to a degree. I know there's some skepticism, and that it takes time to win fans back. That's always been true around baseball, and it's been true here in Seattle.

For a frame of reference, here's a look at weeknight attendance down the stretch in 1995: 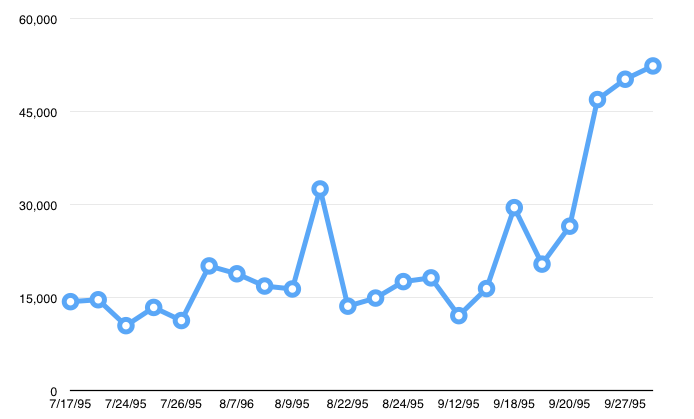 With 1995, there were a lot of excuses. First, to the point on skepticism, the Mariners had never made the playoffs before that season. Fans were right to be a little wary. Second, probably the biggest, the Mariners weren't even inside of five games back until September 15th. Today, this year's squad holds down a playoff spot. Then of course, they also played in the Kingdome, not one of the best ballparks in baseball.

As I said last night on Twitter: hey, maybe this time, don't wait so long to pack the park.

Now, I've heard the complaints, with the biggest one being obvious: it costs too much to go to games. I don't disagree, and I think a bigger priority needs to be made on striking a balance between putting as many people in seats as possible and maximizing gate revenue. People need to fall in love with the game and this team again before they're going to spend money on a consistent basis, and with some of the promotions the M's have done lately, they've taken steps to alleviate that issue.

Then, on the other hand, look at this Astros series. Felix pitches tonight and you can get in for $12. If you wait, and buy from someone outside, tell them you're spending $15 just to get in, maybe even $10 if you're buying a few, and they'll work something out. Oh, and you hate the $10 beers? Well, they have them for $5 now if you know where to look.

Now, part of this is me pretending to be pseudo-altruistic. I can say with 100 percent honesty that if you're missing games you could otherwise attend, you're missing out. I strongly believe the Mariners are set up well to succeed in the coming years—and fans would of course follow then—but pennant race baseball isn't promised to anyone. And even if it were, even if someone could guarantee you the Mariners would be here for every one of the next four years, why would you ever want to skip this one?

But really, as much as I want others to go and take in what's been as enjoyable a Mariners team as I've ever followed, I'm being selfish. I've been to a number of good games this year, games that represent as much fun as I've ever had at a sporting event. There was the Friday night win against Oakland, the Thunderstruck game against Toronto and almost countless others. The common element among these, the most memorable games, is the crowd. It's better with everyone there.

On certain nights, the roar has been back at Safeco. I'm not sure they've fully been woken, but the echoes are stirring. I don't know anymore if Seattle loves baseball the most, but it does love baseball.

The Mariners have done what was asked. They've won. You don't have to come back forever, but it's worth coming back now—because big games deserve big crowds, and the rest of the way, every game is huge.