Hey, you guys, there was a baseball game tonight and the Mariners won

The Mariners eliminated the Rangers from postseason play tonight with a 10-2 win.

Share All sharing options for: Hey, you guys, there was a baseball game tonight and the Mariners won

If I was a smart journalist, I would open this whole thing with a lede using some sort of football metaphor to describe the disproportionate score of tonight's baseball game between the Seattle Mariners and the Texas Rangers. The final score was 10-2, and while that doesn't exactly do the job the perfect football metaphor number of 7 is capable of doing, it certainly feels closer to that of a football game than a baseball game. Lots of runs. Lots of bad throws by lanky dudes with valuable arms. Lots of whats-his-name scrubs on rosters with over 30 people. Something something Texas. You know, football.

Unfortunately I am neither smart nor a journalist (as the denziens at yahoo.com could clearly tell you), so instead of doing all that I'm going to just talk about baseball, because this is, after all, a baseball website. Also because I don't know anything about football. So look, here's the thing:

You should all be excited that your city's football team started their season tonight after winning the Super Bowl during the last real NFL game that was played. You should be excited about that because it's good for Seattle, and it's good for the whole Pacific Northwest. But as you talk to other Seahawks fans over the next couple of weeks, you should remind them that the Mariners just beat a team that was supposed to at least be a Wild-Card contender, if not a division leader, and currently sit only a half game back from the final Wild Card spot with less than a month to go in the regular season for the first time in thirteen years.

You should remind them that rookie starter Roenis Elias pitched five innings of one-run ball in (what amounted to a AAA start but shhhhh) September, and that the Mariners have three of the top players by WAR in the AL on their roster. You should remind them that even though they've had rough weeks here and there, the Seattle Mariners are pushing for the playoffs for the first time since the Seahawks were in the AFC, and that they should probably start paying attention to what could very well be the best year for sports in the Northwest since...well...I don't even fucking know.

Tell them that. And tell yourself that. Because woah. This is starting to get real.

As I mentioned, Elias was serviceable tonight over his five innings of work. He started running into trouble early in the game, however, having difficulty spotting his breaking stuff. Then his fastball. Then all of his pitches: 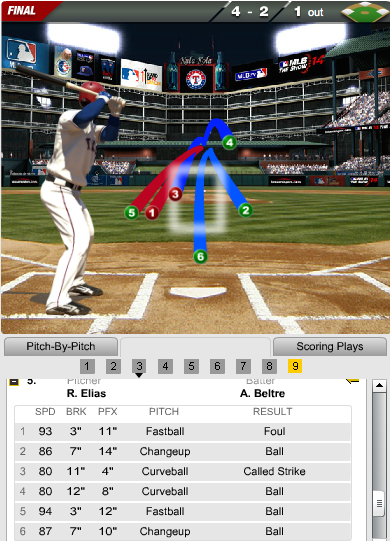 Yikes. Part of what made this go the way it did was that Roenis Elias was facing the worst team in baseball plus Adrian Beltre, and also that he had an 8-run lead at the exact moment of this screengrab. Elias wasn't his sharpest today, but he ate five innings that very well could have gone to a bullpen arm with the recent struggles this starting rotation has had. One strikeout and one walk won't start any parades, but just look at that boxscore:

Yes, tonight was a reversal from that awful game a week ago that saw the Rangers beating up on the Mariners, which in and of itself was a reversal of that game from two years ago that saw the M's putting up 21 against the Rangers in this very ballpark. But the difference between tonight and all those other games is that this one took place in September. So when these things happened:

Then they got three more in the third:

And another in the seventh.

Yeah, this was fun. What was perhaps most encouraging about the whole thing (besides, you know, strange visions of competency by a team your gut associates with spilled milk) was the fact that Chris Denorfia had his best game as a Mariner yet, going 2-3 with a dinger, a double, and two walks. There has been a lot of fanfare on ROOT and the like about how Denorfia is a better hitter than he has been so far, and if tonight means anything, then well this is going to be a damn exciting month. Even with handegg games taking up time on the telly and the twitters. 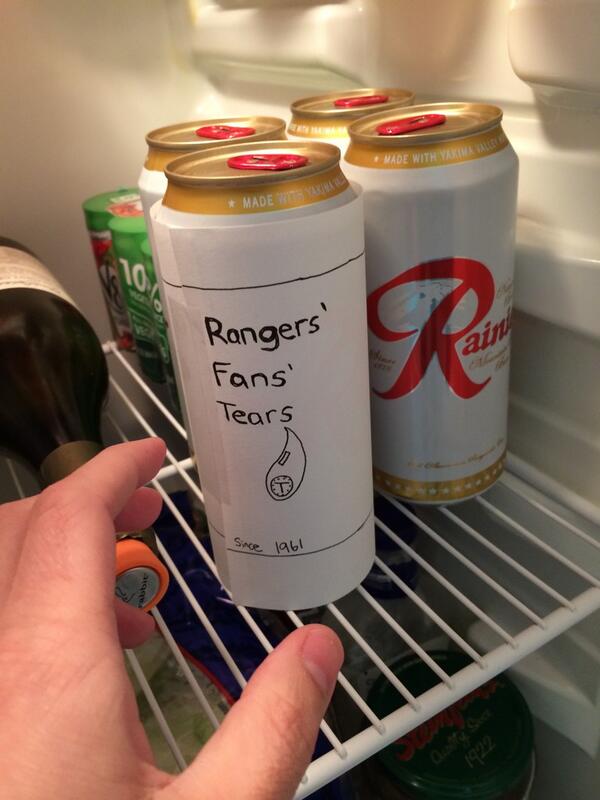 The third exciting thing is that when Lloyd pulled some starters late in the game for rest, they were replaced by players like Brad Miller and Logan Morrison and James Jones. I'm not claiming that James Jones and Logan Morrison and Brad Miller are going to carry the M's to the postseason, but considering what past September call-ups have looked like, this is some actual legitimate depth at play for once.

Tomorrow Hisashi Iwakuma takes the mound and this train to October keeps on going. Have fun with this football season, for sure. But don't forget that for the first time in thirteen years you don't have to turn to it as a distraction.