Share All sharing options for: Felix dominates and the M's prove that two solo home runs are better than one

During the first three minutes of today's telecast, Blowers and Sims probably uttered the words "pitcher's duel" fifty or sixty times. This is a phrase that has always bothered me a little bit; duels are conducted between two individuals whereas the game of baseball pits two teams against one another. The pitchers never directly face each other (in the AL, at least), so it's silly to refer to this as a duel. But maybe I'm just being too literal. In any case, today's game did ultimately shape up to be a fairly quintessential pitcher's "duel".

First and foremost, Felix Hernandez got back to being King Felix. After scuffling a bit over his last few starts, he rebounded this afternoon to scatter just five baserunners over eight innings. He located his pitches well and stayed ahead in the count all afternoon. But, despite his outstanding performance, this didn't feel like a particularly dominating outing. Felix recorded only seven swings-and-misses (tied for the lowest all season) and recorded just four strikeouts. It's possible that pitching to contact was a big part of Felix's game plan today; allowing the A's to get themselves out did work very well for Paxton yesterday. In any case, I'm more than happy with the results of today's game.

Lester also lived up to his billing as a top-tier pitcher, giving up just two runs over eight innings. However, the Mariners actually hit Lester a bit harder than the final score might suggest. Although they only collected seven hits against him, five of them went for extra bases (two home runs and three doubles); that's the most XBH they've had in a game since they beat the Blue Jays on August 11th. Unfortunately/unluckily, all of the Mariners hits today came when no one was on base. Thanks to jacks by Kyle Seager and Corey Hart, this didn't end up costing them today, but if the Mariners are going to continue to contend for the playoffs, they can't afford to put up many more games where they go 0-fer with RISP. 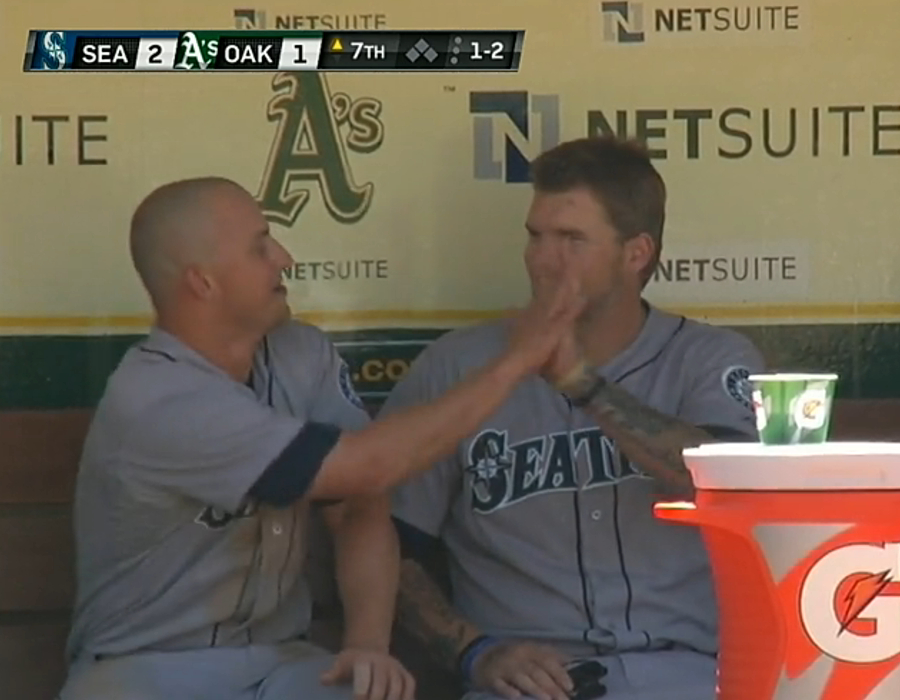