The year we all needed

Share All sharing options for: The year we all needed

When it was over, I couldn't be mad. Sitting high above the third base line, looking out at a cool, but sun-drenched and packed Safeco Field, I couldn't find it in myself to be upset when the numbers on the out-of-town scoreboard flipped from 2-0 to 4-0, and then from 4-0 to FINAL.

Even on the way in, despite hope that things would change, I couldn't get angry when Oakland jumped out to its early lead. Because at the very least, on the last Sunday of the baseball season, there would be more than 40,000 people on hand to celebrate the 2014 Mariners.

And this is a team worth celebrating.

It was a celebration that lasted all afternoon. Regardless of what happened down in Arlington, yesterday's contest never felt like a game the Mariners were capable of losing. When I was walking up the steps from the 'Pen, past the Angels' bullpen, I heard one guy ask a friend who the Halos had starting. "Not Felix Hernandez" was the answer.

But when it switched from meaningful to meaningless, when it stopped mattering 1,453 innings into a season that's 1,458 innings long, there was the moment I'd been hoping for, an acknowledgement of all that'd transpired. As the scoreboard changed, and showed that dreaded "F" next to the score for OAK and TEX, the 40,000 on hand rose as one and cheered. It wasn't a thunderous ovation, not like the one the night before for Kyle Seager's tear around the bases, nor the one later for Felix Hernandez's exit—but a genuine and heartfelt applause.

Again, this team deserved it. I know there are those out there who refuse to take solace in what they're calling a "moral victory," but as Jeff asked in his piece yesterday, "how seriously do you really want to take this?" I know I take this more seriously than I should, serious enough that the mood swings wins and losses produce likely warrant some form medical help, but in the end, I wanted this team to be compelling. I wanted to watch all year, and I wanted it to be fun. It was that, and even then, it was more than I ever thought it'd be.

Through the good and the bad, the team was enthralling. There were times I think we all hated them, or were at least furious, and even then—we still loved them. The 2014 Mariners, as they existed, are no more. The core will remain largely the same, and they hardly lose anyone crucial to their success, but there will be turnover among the role players, and even among those who return the roles and expectations will change.

So it was fitting, with all that was accomplished, that when Felix was removed and the book on the 2014 Mariners reached the last line on its final page, manager Lloyd McClendon, in his first season at the helm, appeared to be brought to tears:

That's the soft side to this, the "Ya done good, kid" attitude that permeated throughout the ballpark. In a way, yesterday wasn't too dissimilar to that day five years ago when Griffey and Ichiro were carried off the field. But it was also something else entirely, something much more real.

This morning, I woke up to this in my Twitter mentions:

@colinokeefe On a Sunday in September, Seattle was a baseball town. Kinda unbelievable. Go M's.

And it was true. It was true yesterday—a cold, crisp autumn day—and it was true all weekend. The Mariners never truly captured this city the way that I'd foolishly hoped they would, that genuine contention would bring 35,000-plus for weeknight games against mediocre teams. Still, it was a taste, it reminded Seattle's casual baseball fans, those who have cheered for every other quality team this city has produced, that something might be brewing at the corner of Edgar and Dave.

For us passionate fans, the diehards who live around these parts, it was a taste of something we haven't had in a long time. The Mariners will not play in the postseason, but there were so many nights that felt like they already were.

While I loved yesterday and all it represented, Saturday night was this season at its peak. I bought a $10 ticket off Stubhub during the game the night before, went alone and spent most of the evening wandering the ballpark, viewing something Safeco had not seen in a long time from every angle I could. 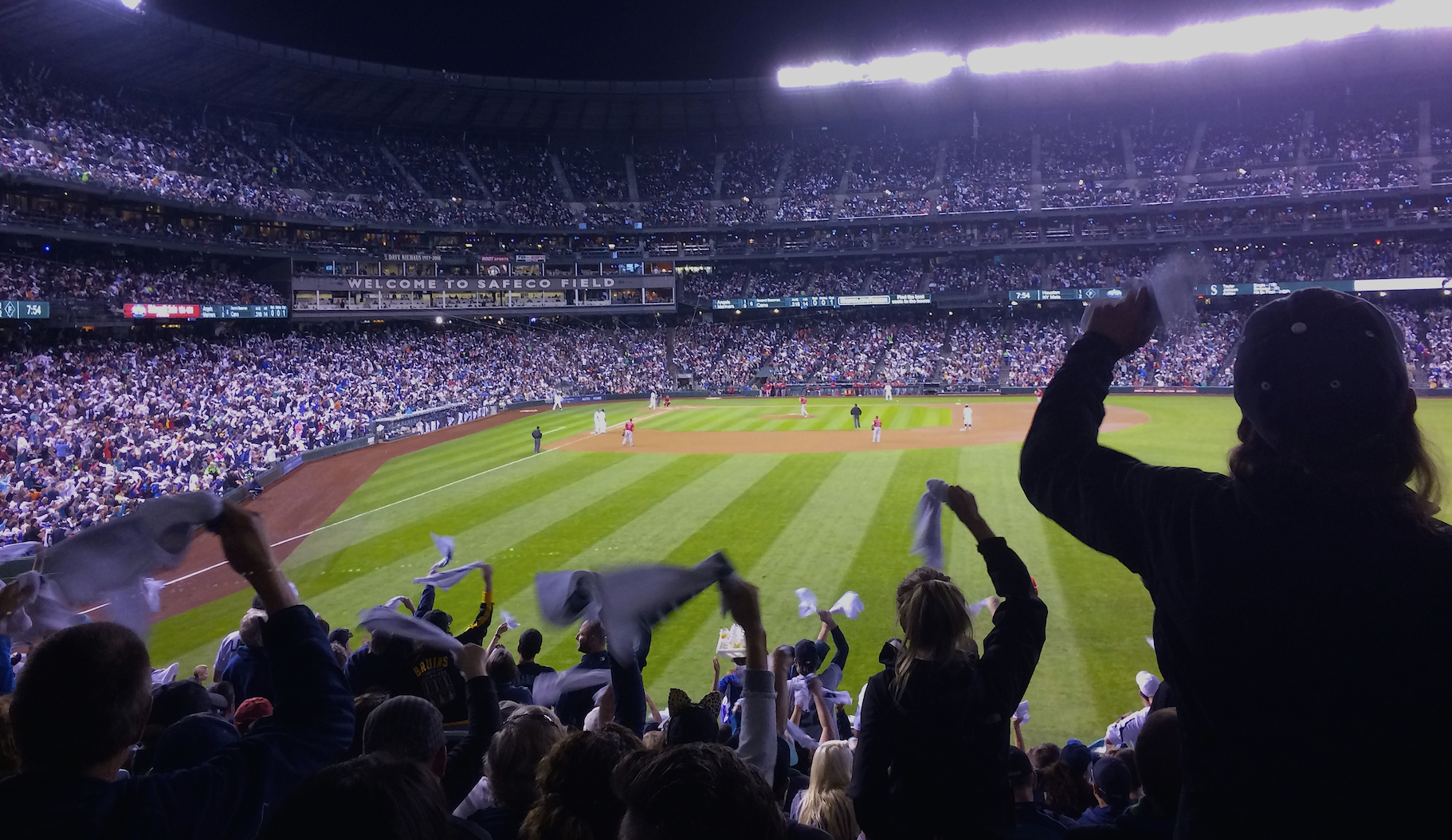 When CJ Wilson left a first-pitch 91mph fastball hang up and in to Logan Morrison, who sent it hurtling to the right-centerfield gap, I've never felt more raw emotion as a sports fan. In the nearly empty set of seats I'd moved to, 25 rows up from the cut of the first base grass, I jumped up and down screaming as loud as I could. When Seager slid home, well ahead of the throw, the stadium erupted. I turned to high-five anyone I could find, settling for some guy's two kids and the elderly couple in front of me. It was baseball, as competitive and pure as I've ever experienced it.

Where that was baseball at its most joyful, extra innings were it at its most terrifying. The slightest misplay, or missed opportunity, could end the season. The Mariners had some of each, and they lived on. Playing the Salt Lake Bees helped, and ultimately made the emotion felt at the end feel more like relief than joy, but it was still something I hadn't witnessed in person since Carlo Guillen's bunt past first.

Mariners fans needed this season—both the casual observers, and the diehards. It was needed in what it provided—enjoyment and interest all the way through—and in what it represents. Since Jack Zduriencik took over, now more than a half-decade ago, we've been looking for that bridge year. When would it stop getting worse? Initially, it looked like 2009, and the ensuing backslide is appropriate framing for why Zduriencik and regime have faced as much derision as they have.

Now, finally, they have that year. They've shown they can build a roster capable of contending, and they've shown this slow-and-steady process can yield results.

Between now and 2015, we're going to hear a lot about all that went right for the 2014 Mariners, and that there are facets of the club doomed to extreme regression. But what we've been overlooking to a degree is all that went wrong.

The Mariners got all of a third of a quality season from their three reclamation projects on offense. Three of their five projected Opening Day rotation members missed significant time as Erasmo Ramirez, Blake Beavan and Brandon Maurer made a combined 22 starts. Expecting a rotation that has a very good chance at being more talented than the 2014 version to produce worse results because the previous iteration was very good is as lazy as saying "the Seahawks won't repeat because most teams don't repeat." Then, to add on, "most of the bullpen produced career years!" is another cry I've heard, even as its three best pitchers—Fernando Rodney, Tom Wilhelmsen and Danny Farquhar—have all had better years.

In sum, the Mariners are talented, and they are more than capable of being better in 2015 than they were in 2014. As Nathan put it the other day, when looking at things on a much smaller scale, the direction in which your arrow is pointing is important—and the Mariners' is pointing up.

Nevertheless, taking a first step is only noteworthy if a second step shortly follows. The environment in which they compete will surely be more difficult in 2015. Oakland may not slide like they did, Texas will return and Houston is coming—not to mention the potential upswing of the big market teams out East.

But as Lloyd put it after the game yesterday, the Mariners are the hunters now. They are not at the whims of what other clubs do; it is not as if they don't have a say in this. They've built a quality core exactly how they wanted, with an ace up front, a big free agent in the fold and quality cost-controlled players back them up on both sides of the ball.

We were promised year-over-year contention, and there are few clubs—if any in the American league—better positioned for such a run. People will point to all sorts of teams—the 2009 and 2007 Mariners, the 2013 Royals, the 2012 Pirates and even the 2010 Seahawks as markers for what could happen. We have the entire off-season to look for patterns that might hint at what lies ahead, but remember this: there is no course that they are destined to follow. Everything that happened to all those other teams has no bearing on what happens to this one.

The Mariners have spent half a decade building to the point that they weren't exposed to being a victim of their circumstances—not that that's the entire story here. There have been many successes, and plenty of mistakes, but there are where they are now for a reason.

But where they are now, packing up and heading home, is not where we nor they want to be. They've accomplished a lot, but going from good to great is even more difficult than going from bad to good. There's a path to walk—or to cut—but they still need to take it.

So hurry back, baseball—we're all anxious to see what's next.