Mariners kick off 2015 in style

Share All sharing options for: Mariners kick off 2015 in style

When I turned away from the game last night, choosing to do something else than sit through the painful last few innings, I was fine with the idea that we'd reached some kind of resolution. With Taijuan Walker taking the mound, 2015 started tomorrow (today), I thought—and it felt like a better approach to things than Monday, when I came home from work and just went straight to bed, more devastated than I've felt in a very long time.

But then it grabbed me again. They grabbed me again. After a few hours of uproar, immense sadness and bubbled-over frustration, there was some optimism, a few voices here and there who thought "Why the hell not? Why not just be hopeful until the end—in case a miracle happens."

And that's where I was today. Being so close to the end, I figured it made sense to just be hopeful a little longer, to pray for a miracle. Even if it was a delusional thing to do, it was fun to scoreboard with with a little fervor this afternoon, and to actually see some good news. With the margin between realistic and actual elimination being so slim, I thought I'd just hold out for the latter. Because why not?

Tonight's why not. Because that felt awful, even if the way it ended was almost humorous in just how fitting it was.

This was the best we've seen of Taijuan Walker at the major league level. The strikeout total wasn't gaudy, as he only finish with 6 Ks, but that total is honestly surprising because he did truly dominate. He was working the fastball in and out, and when he got ahead, he worked off ungodly breaking stuff.

Though he had plenty of good ones, and the yakker was likely his second-best breaking pitch tonight, his 3-2 curve to Jose Bautista stands out as the pitch of the evening:

(That comes courtesy of @Jose8BS of 8 Bit Sports, he's a must-follow for M's fans on Twitter because of stuff like this.)

This pitch encapsulates the evening quite well for Walker as he pitched with confidence, and that was on display all night. It wasn't the unquantifiable moxie he had about him either—I saw someone suggest he had a Felix-like presence out there—but more important, he worked efficiently. He made it through the seventh on 79 pitches before having to throw 20 in the eighth.

And like I mentioned up above, the curve many people have been talking about as his primary second pitch took a back seat to what he calls a changeup, but what pitch f/x has labeled as a splitter. Shannon Drayer and Ryan Divish chimed in on Jason Churchill suggesting it was more of the latter:

@RyanDivish @ProspectInsider He doesn't. He said the split is minimal and as Ryan said, more of a palm ball. Terry Clark taught him the grip

Whatever it was, it was looking good. He gave us a look at it right out the gate:

Walker threw the pitch 27 times, and of the 14 swings on it, five of them missed. Only two were put in play for a hit, one of those being the game-winning gork-job. Speaking of that specific pitch, here it is: 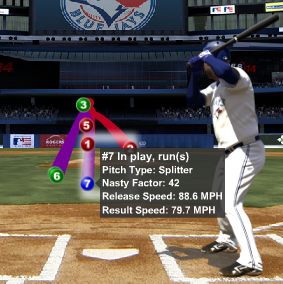 This came after Walker just couldn't spot the pitch for a strike earlier, not in this at bat nor the one to Munenori Kawasaki—which resulted in a four-pitch walk. Ultimately, it was that walk to Kawasaki that did in him. After the stellar performance to that point, it's hard to fault him, but walking Kawasaki was a bad mistake. The bottom half of the lineup has guys you have to make earn it, Mune included, and Walker granted him a free pass.

Still, Tai will learn. Because, despite the hail mary attempt at a playoff spot, that's what today was about. This was the best start of Taijuan Walker's major league career and as he matures into the type of pitcher we all want to be, the one he himself wants to be, he'll hone the skill that is finishing off an outing.

Let's do some bullets, but just a few.

Well, they're playing again tomorrow. With losses by Oakland and Kansas City, they will make it to at least the first pitch of game 160 before elimination. It's a disappointment with where they've been, especially when a .500 September record would've gotten them into the postseason, but it's a step forward. More than that, it's been fun. It's been more fun than I've ever had following a sports team. Let's have some more this weekend at Safeco.
Go M's.