Mariners finally seem to acknowledge necessity of winning in playoff hunt, do that

Share All sharing options for: Mariners finally seem to acknowledge necessity of winning in playoff hunt, do that

A few hours ago the Mariners were pissing a Felix start down the drain while a AAA team made them look like the incompetent fools we all feared they were. At that moment, it seemed the Wild Card was well out of reach, and that the season was gulping down its final breath right there in front of our eyes.

A few days before, the Mariners were watching the Angels tack on run after run after run after run and although the A's and Tigers and Royals had just dropped games a short while earlier, it felt as if the Wild Card was quickly falling out of reach, that the season was gulping down its final breath right there in front of our eyes.

A few months before that, the Mariners were on an eight game losing streak and wallowing in pointless extras to the hapless Astros, and although Kyle Seager was up to bat, he had already hit a dinger that day and lightning never strikes twice in one spot. And at that moment, it sure would have been funny to imagine the Mariners ever even twenty miles away from a WIld Card game, and it seemed like the season was gulping down its final breath right there in front of our eyes.

Well today the Mariners easily handled those same Houston Astros to get within a half game of the final Wild Card spot, and it sure as hell couldn't have come at a better time. Well, that's kind of a strange sentence, because these games are scheduled like a year in advance and there is really no way to divert from something that's set in stone like that. Instead, let's just say that after whatever happened last week, the Mariners seemed ready to stroll into Houston and beat up on a ballclub that has surprisingly given them hell since coming over to the American League, and if the next few games go the way we are all hoping they do, then that couldn't have come at a better time.

Today it was Taijuan Walker getting the win, lasting five innings and some change with only two runs to his name. It wasn't the sharpest outing from the Fresh Prince, but he continued to improve on what has been a bit of a shaky year for the one time top pitching prospect in the American League. Today he hit 98 and threw 66 of his 96 pitches for strikes, 15 of which were swinging. The Astros are bad, but they are also a lot better than everyone likes to imagine: so this was at once the biggest game of Taijuan's career and the safest bet at inducing confidence late in the season. That's because they have a five-and-a-half foot player that can punish you for throwing a ball here: 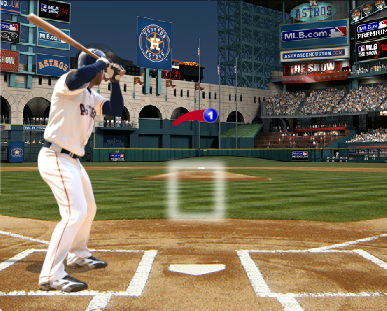 As well as a 23-year old shortstop prospect that can strike out in an at bat like this: 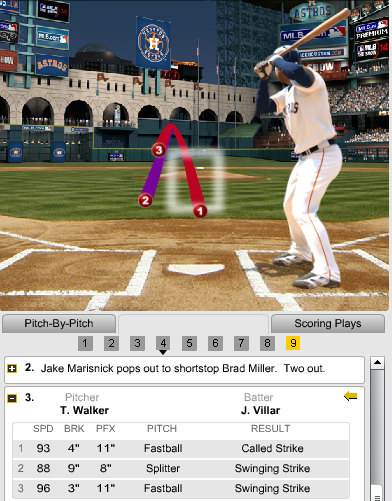 So the real story is that the Mariners got the win, keeping their playoff hopes alive. And it was well timed, too. But they also pulled a solid start out of their sixth starter, and broke a week of geriatric athleticism with three hours of the word encouragement embodied. And it wasn't just Taijuan:

Not pictured here are two home runs from Dustin Ackley, including an opposite field blast to tie the game in the third inning. The Mariners ended up scoring 10 tonight, which is one the one hand exciting but also a little terrifying, because in the past few days it seems like they either score zero or eighty nine thousand. But a win is a win is a win.

It could have been a lot worse as well. Had the Mariners not decided to score those eighty nine thousand runs, it would have been very possible to see Yoervis Medina blow the whole thing to kingdom come in the bottom of the eighth after he gave up back-to-back singles to Max Stassi and Matt Dominguez, who were each plated with a few poorly placed pitches. The Mariners have the best bullpen in baseball, and for a hot minute it seemed everyone was confused as to how Yoervis Medina became an elite setup man, even though he's actually closer to that archetypal featureless pitcher you get when you play R.B.I. Baseball without mashing the joystick into oblivion. Well, even if he's been less than stellar over his past few outings, he's managed to sneak through a season that was probably above his pay grade, and you can't take that back. Those two runs didn't really matter tonight.

Because ultimately, all that matters is that the Mariners are a half game out of the last Wild Card spot with nine games to go. They have had plenty of chances to let the whole thing come cascading down over the past week, but for some insane reason they refuse to quit.

And sure, there are a lot of things you could be worried about now. Worried that Fernando Rodney hasn't thrown a strike in any of his previous seventy-nine pitches. Worried that Kendrys Morales is hitting .183 in a crucial month of September and continues to get starts. Worried that Danny Farquhar may never get another chance to pinch run with this speedy James Jones character taking up space on an overpopulated bench. Lots to worry about.

But tonight the Astros thankfully opened their doors like the gracious hosts they are, offering their bodies and home plate as collateral in whatever this little dance is that is happening in the American League standings. The Mariners are probably going to owe them the same favor in five or six years. But for now, it's on their tab, and last call is just around the corner.