LoMo comes through in the clutch and Felix dominates the Angel's Bee-team.

The expectations heading into this game were through the roof. FanGraphs had the Mariners odds to win this game around 60% but it seemed like it should have been 80% or 90%. The Mariners had King Felix on the mound and were playing for their playoff futures. The Angels had just clinched the AL West and manager Mike Scioscia ran out all of his reserves. It was a team of replacement-level players against the best pitcher in the AL. There was no way the Mariners were going to lose this game, right? Right guys?

For the first few scoreless innings, this game seemed like one of those dumb ideas that your friend has and you just have to laugh at it because of its ridiculousness. But then, as this game went on and the zeros continued to pile up on the scoreboard, the frustration level kept rising. The laughs turned hesitant and awkward as you realize your friend is deadly serious about his dumb idea. Of course robbing a bank is a terrible idea, right guys?

Just when the frustration level was at its peak -- after escaping a bases loaded jam in the bottom of the eighth -- Kendrys Morales came through with a two-out single to left in the ninth. James Jones pinch ran and made it to second on an errant pickoff throw by Kevin Jepsen. An intentional walk to Kyle Seager brought up Logan Morrison. On a 1-1 pitch, an 85 mile per hour changeup, belt high on the outer half of the plate, Logan Morrison extended his arms and made solid contact. The ball sails into the humid Californian air and barely clears the high wall in right field. Finally, some sanity. The breakthrough we were all hoping for. Hope stumbles on (thanks sanford_and_son).

A brief ride on the Fernando Rodney Experience made the bottom of the ninth a bit more exciting than it needed to be. A Hank Conger home run and an error brought the Angels to within two with the tying run at the plate. Fernando quickly shut that door with a called strikeout to end the game. Arrow. Mariners win. We all collectively take a deep breath. 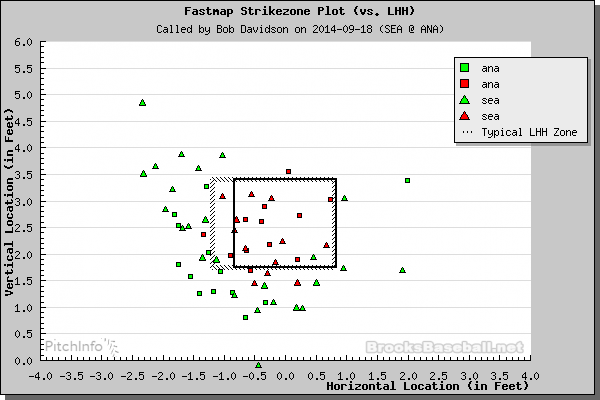 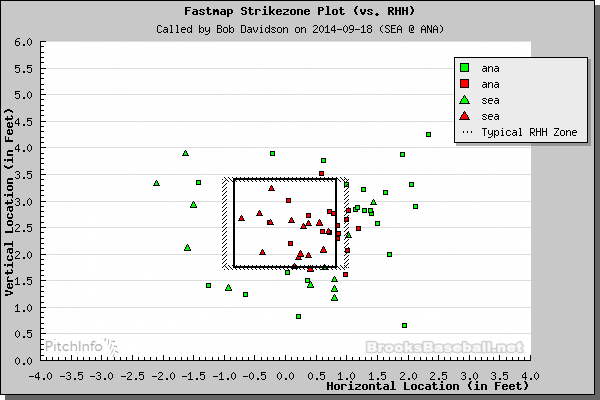 What a game. The leverage index in a single game can serve as a pretty good indicator of emotional investment -- the higher the leverage, the higher the emotional investment. Huge swings of frustration and joy, agony and ecstasy result from these situations. We're at a point in the season where the leverage of each game is through the roof and therefore, each play in each game is that much more important. Emotions run high down the stretch and it's been a while since we've associated this amount or kind of emotion with the Mariners. Whether or not the Mariners make it to the playoffs this year, this has been the most fun I've had as a fan in years. That's something to be valued and cherished. Enjoy every last pitch this year, guys.