Roenis Elias leaves with an elbow injury after struggling, but the Mariners' offense explodes to give the season another shot because hey, why not live dangerously close to the edge?

Share All sharing options for: Mariners avoid collapse by scoring weeks worth of runs, defeating Angels 13-2

For a minute, it was all over.

It was over because the Mariners were coming off back-to-back days of some of the most gut-wrenching, potentially season-ending play, and they picked right up where they left off tonight. In the first it was looking at twelve pitches before being put down like a tired dog, then watching as Roenis Elias hit Kole Calhoun with his third pitch of the game, gave up a single to Mike Trout, another RBI single to Albert Pujols, and eventually another RBI single to David Freese before exiting the inning.

It was over because it was 2-0 Angels in the first twenty minutes of the game, and although we all know that's a silly reason to declare a game's terminality, it certainly felt awful in the context of the last few days as well as the tenuous hold on any promise of the postseason this club may have had before tonight.

And then it got worse. Elias' command was all over the place tonight, and for the second day in a row, one of the Mariners' biggest success stories of 2014 began to unravel before your very eyes. One thing is clear in all this: the starting pitchers on this team are getting tired, and Elias is no exception. With the caveat that he's never been one for lightning-sharp precision, take a look at this sequence of pitches and tell me it's from the same guy that brazenly threw a belt high fastball to Miguel Cabrera as a fuck-you statement pitch earlier in the season: 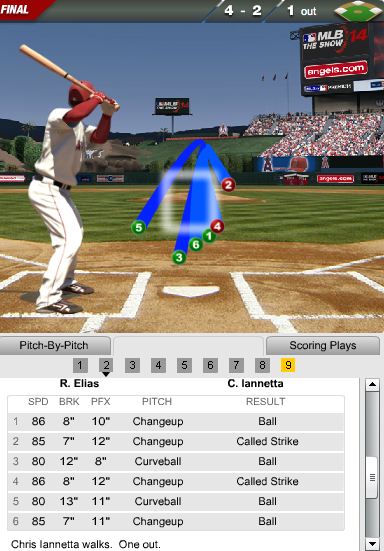 So again, things were trending in the opposite direction of up. Elias managed to escape the second unscathed, but he put two on before getting two outs with Mike Trout up at the plate. By the fourth, the Mariners were being one-hit, and then suddenly Mike Zunino was rushing to the mound while Elias shook his left elbow a little bit after a missed pitch.

So to recap: consecutive days of unraveling appearing to continue in the early innings, compounded by both the spiritual loss of another pitcher (fatigue) as well as the material (being pulled due to elbow stiffness, unable to make his next start). The season wasn't over, but it felt more over than it had felt all year. And really, this was as close to Over as they had ever been.

To his credit, Lloyd has refused to take the past three days as anything of the sort, shrugging off our doomsday predictions for exactly what they are--reactionary panic. After yesterday's loss he shrugged his shoulders and accepted the club was struggling, simply declaring they needed to find a "big hit" to get some sort of momentum going into the last games of the season. Well tonight they got something, and if you ask me, it wasn't a hit at all.

In the bottom of the fourth, Elias put Josh Hamilton on first before exiting the game with the aforementioned elbow stiffness, leaving Carson Smith to negotiate three outs with a man on first and a 2-0 lead that felt a whole hell of a lot bigger than it was. But then something happened. Josh Hamilton, oft-injured and fresh off a bed of medical tape and an aspirin diet, decided to take off for second as Smith faced his second batter as if the game was tied and the Mariners were cutting through the Angels' chances with a razorblade.

Smith threw an 83 mph slider well off the plate, and in any other world--especially with the way things had been going--Hamilton would have been standing on second already, the ball sailing into centerfield to the tune of the Benny Hill theme music. But then this happened: 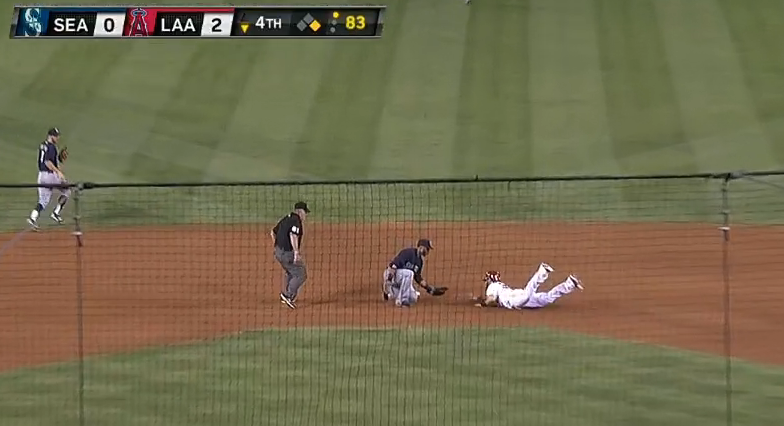 It may have felt anticlimactic, or simply that the Mariners picked up on a tiny mistake from an otherwise menacing and dangerous ballclub. But something clicked when Cano reached down to tag Hamilton on the shoulder for the second out of the inning. It was as if seeing even the slightest sign of vulnerability in their opponent made the Mariners realize that they belonged out there, that they were in the midst of a playoff hunt for a reason and this wasn't all a mistake.

I say this because everyone is going to talk about Zunino's game-tying double in the next inning as the moment it all happened. It very well could be. But this was never a team built on dazzling and magical offensive performances, despite the fact that they put up 13 runs tonight. No, this has been a team designed around run prevention, which is why they still hold the second-best run differential in all of baseball, and over the past few days they certainly haven't been great at preventing many runs.

But that all changed when Zunino threw out Hamilton. It was as if a switch was flipped at that exact moment, and suddenly the Mariners were back to being their usual selves like they were a machine being operated incorrectly, righted after simply reading the fine print in the user manual. So after that, when Zunino hit his double,

it didn't quite feel like some towering, monumental event. In fact, Trout probably would have had it had he not surprisingly taken a piss-poor route to get to the ball. But that's how this Mariners team works. It wasn't a made-for-TV moment that saved the season, it was a reminder that they are capable of competitive play after a routine play--a reminder that they can string together runs if they need to, that they can send Angels hitters back to their dugout even after they reach base.

So yes, at this moment it was the opposite of over. It remains to be seen if the M's will turn this moment into the push they need to start some dramatic playoff push, but you can't say anything other than the fact that this game, and that inning saved the season for the 2014 Mariners. That isn't hyperbole. Had they worn another demoralizing loss on their chin, the hole very well could have been too large to dig out of, at least mentally. Instead? 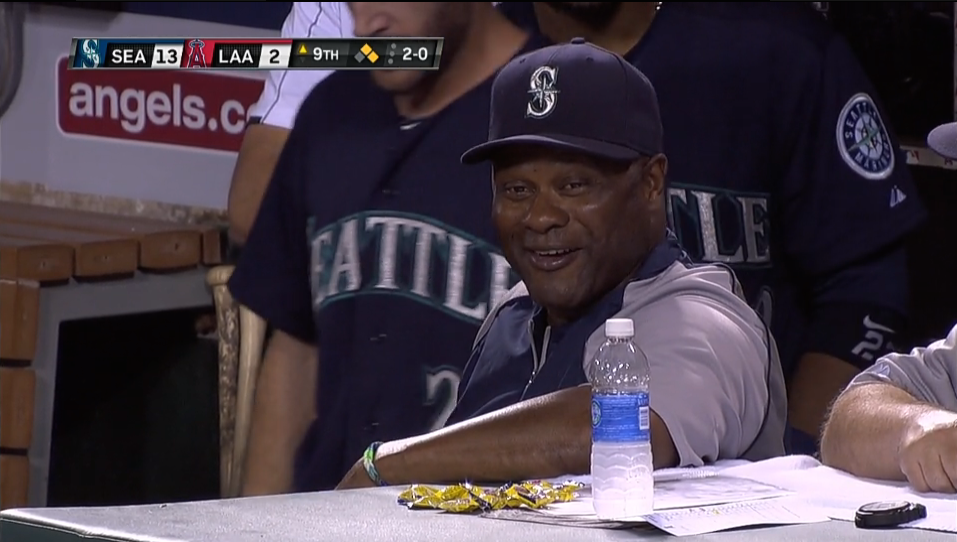 Instead it was bewilderment. Joy. Confusion, but the good kind. If you want to see the specifics of how the M's got those 13 runs, check out the box score. It was garbage time by the sixth inning, a spring training game in September with playoff implications. The details don't really matter because whether or not it was an Angels pitching collapse or a Mariners offensive explosion, The Loss was avoided and the Mariners injected new life into their season tonight.

Elias' injury is certainly a big one, and although the Mariners are lucky to have Taijuan waiting in the ranks, it could very well impact the way the next two weeks go. But just realize that for an hour tonight, the season was over, and the Mariners decided to take the steering wheel and put the car back on the road. If you think that is just delaying the inevitable you should listen to how they took the whole thing: