The Mariners lost ground in the wild card race and the Angels clinched a spot in the playoffs.

I'm done reacting after every loss like it is the one that finally broke the camel's back. The Mariners dropped a game and they did so in a fantastic fashion. For a couple of innings this seemed like a game they could compete in. Iwakuma looked good-ish for a while, but then the Angels turned into the Angels and less-than-humbly reminded the Mariners why LA sits at the top of the AL West and not Seattle.

And then, just like that, in a flurry of shit hitting the fan, everything seemed to go wrong. When the dust settled on Monday night, the Mariners lost a game on a night when all opponents worth caring about (except for the motionless Athletics) won. The Royals, in particular, won in a way that made me feel like the Mariners were already defeated. So when Iwakuma fell apart in the third inning, it just had the notions of one of those evenings like all hope was lost. A lot of factors go into this -- Iwakuma being less than good in his past five starts, but most importantly the fact that the Mariners offense needs to be taken out like three week old trash at the moment.

In the end, the Angels clinched a spot in the playoffs because they had to do so against the Mariners. I hate the Angels with a burning passion, and I do so even more now. But I refuse to acknowledge that the writing is on the wall for the 2014 season. Perhaps this is because my eye sight quit working worth anything in the second grade, but I still see plenty of time to get things right. The Mariners are two games back on the Royals and 3.5 games back on the Athletics. There are still 14 games left to play. So although each loss narrows that narrow window even more, playoff projections sit right around 30 percent. Combine that with this little interesting tidbit via Shannon Drayer today, and we still are in for some exciting times in September.

The Royals still have a suspended game they must finish and in that game that will be made up Sept. 22. They trail the Indians 4-2 in the 10th inning.

But enough with the posi-writing. Let's talk about tonight. This game was horrible. Everything the Mariners did tonight was horrible. The only good thing that happened was Albert Pujols pulled his hamstring after essentially winning the game in the third inning. It is a tough pill to swallow, but we have no choice but to swallow it and muster up the energy to be excited for tomorrow. The final 14 games are going to be rough, but at least we care about the games for the first time in a long, long time.

There isn't much that needs to be recapped about this game. Iwakuma was rolling along alright until he ran into trouble in the third inning. He lost a battle against Albert Pujols that on one hand I wanted to tip my hat to him for trying hard, but on the other hand slap him across the face because Iwakuma should never have been in that situation. Iwakuma rolled over the first eight batters of the game and it looked liked he was back on track. Then, with two outs in the bottom of the third inning, this is what transpired.

The worst part about the Pujols at bat was by all accounts Iwakuma seemed just on the verge of getting him out. Iwakuma went up 0-2 on Pujols, who proceeded to foul off four straight pitches before golf clubbing a blooper into the outfield. Here is the pitch location on that seventh pitch. 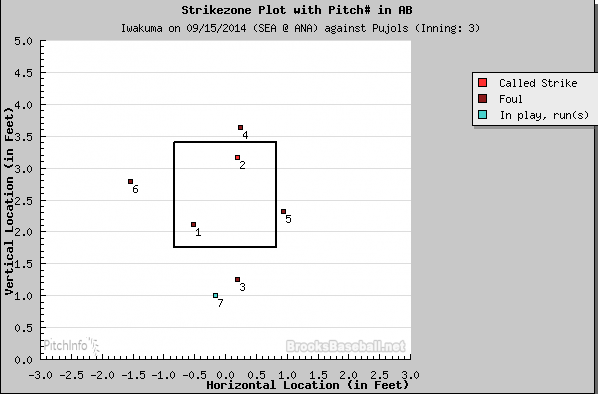 Here is what Pujols looked like swinging at that garbage. 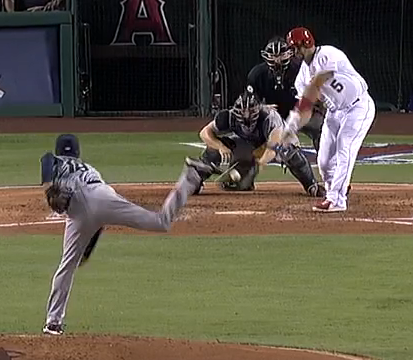 He basically swatted the ball like a one-handed backhand in tennis.

Absolutely brutal. Of course, Iwakuma didn't do any better when he came back in the fourth inning. David Freese immediately homered to increase the score to 5-0 and two more Angels would get on base before Lloyd McClendon finally pulled Iwakuma out of the game. The final damage: 3.1 IP, six hits, seven earned runs, two walks and four strikeouts. This was the fifth-straight blah start by Iwakuma at a time when the Mariners need him to be much better than blah.
It is hard to figure out what is wrong with Iwakuma at the moment. Over his past four starts (not including tonight since that isn't in Fangraphs yet), Iwakuma has pitched 18 innings and given up 15 runs for a rather menacing 7.50 ERA. But the advanced metrics put his xFIP at 2.95, which is just a tad higher than his xFIP of 2.84 on the season. His control hasn't been stellar as of late, but it isn't like he is walking people willy-nilly either. No matter what, the Mariners need Iwakuma back, badly.
The Mariners need their offense back, because it has completely vanished at the worst possible time. There isn't much need to harp on it because everyone is watching the same games and looking at the same box score. Over the past week the Mariners are hitting .185/.257/.315 with a wRC+ of 63. The dream of the playoffs is slipping, and it is going to completely slip away sooner than later unless the Mariners remember how to score more than two runs a game. This time around, the Mariners didn't frustratingly leave millions of men on base because no one really saw the base paths too much. Robinson Cano and Logan Morrison mustered the only extra-base hits of the night as Matt Shoemaker added something to the resume for AL Rookie of the Year. Without any offense, the Angels just shoveled the shit on our heads and left us for dead.
I'm done with this game. Tomorrow is a new day.