Mariners fail to find the magic

It was another heartbreaking loss for the Mariners. All that's left is to sift through the ashes.

Share All sharing options for: Mariners fail to find the magic

The Mariners lost to the Oakland Athletics tonight, 3-2, in ten innings, before a sold-out crowd at Safeco Field.

Then, Fernando Rodney appeared, and then, the conflagration. 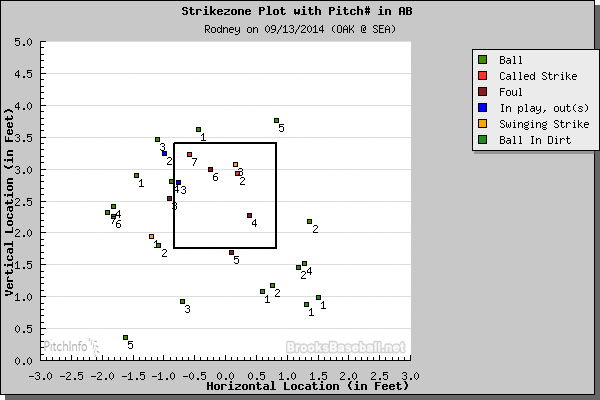 Less than a third of Rodney's pitches were strikes. He was only ahead in the count once, on a swinging strike out of the zone. Otherwise, the A's hitters were happy to leave the bats on their shoulders. Rodney walked Crisp, then intentionally walked Donaldson following a Sogard sacrifice.  Then he walked Alberto Callaspo, and somehow struck out Brandon Moss on an accidental fastball in the corner of the zone. It almost looked like he'd get out of it despite himself, but four pitches later he had walked in the go-ahead run. Only a beautiful diving snag by Chris Taylor doused the flames.

It was heedless, senseless violence. McClendon was bound by his own maxim never to pull the closer, despite the fact that Yoervis Medina was warm. His confidence in Rodney, in the face of all evidence, was the team's undoing. Rodney's pitches sailed away from the plate like lemmings hurling themselves into the sea. It was a gas leak of a loss, a cartoon anvil.

It's difficult to deal with this Mariners team because they're so difficult to understand. They're neither titans nor plucky heroes, neither overachievers nor underachievers. They've seen plenty of both good luck and bad. They seem at times unbeatable and then unlovable, sometimes on back-to-back nights. There's no real narrative to explain why they play the way they do, or why they deserve to win. They just float through the standings like jetsam, buoyed by the tide.

But there is one undeniable characteristic of this team: they are the least magical ballclub in recent memory.

In one-run ballgames, the team is now 16-26, mere percentage points off of the worst record in baseball. One-run losses are sometimes treated as the mark of a poor bullpen, which we know to be untrue. Besides, one-run games are often the handicraft a strong mop-up reliever, who keeps the team close enough to stage a barely-futile comeback. That would certainly describe the M's, whose bullpen is particularly deep.

But it isn't true. Of the twenty-six one-run losses, they scored the final run in only four of them.

So is the bullpen perhaps weaker than we expected? Not particularly. They still hold the best ERA in baseball. Rodney does lead the team in blown saves, to no one's surprise; however, perhaps to surprise, he does so with three, tying him for 55th on the leaderboards. The Mariners as a team have the third-least blown saves in the league. They also have the third-best ERA in high-leverage situations.

The hitting doesn't provide any answers, either. The Mariners as a team actually hit slightly better in high-leverage situations (.309 wOBA) than they do overall (.300). And yet here we are. The only explanation is that the Mariners seem to time their clutch hitting with particularly un-clutch pitching, and vice versa: this explains the reams of 1-0 losses and extra-inning disappointments.

On April 23, Kyle Seager hit a walk-off home run against the Houston Astros. There have been 172 walk-offs since. None were performed by the Mariners. It's only the second time in franchise history has a team managed only a single walk-off in a season, and that includes the entire seventies and eighties.

That's why the Mariners don't carry that manifest destiny that truly captivating teams do. That's why "because Mariners" still seems to stick. They win forgettably and lose painfully. If this were 1984, or even 2004, we would look at these one-run games and blame it on the manager, the symptom of a lack of heart or desire. Now we understand, through we are not consoled by it, that the team is doing the right things, just not in the right order.

The 1995 Mariners had that magic, and they are forever beloved. This team is their opposite, a group of cardiac kids who actually die every week, and then get back up to do it again. There's not many games left to find that magical regression, to succeed when it's needed most. But if the cards fall the right way, it'll only take one hero and one moment. All we can do in the meantime is float.