In which the author indulges himself.

September 14, 2003. 45,681 people watched, unknowingly as the Mariners brief run of success came to a close. Leading 1-0 in the top of the 8th inning, with 2 outs and a runner on 2B Bob Melvin had Ryan Franklin intentionally walk Garret Anderson to pitch to Tim Salmon. Franklin was at 117 pitches and young right hander Rafael Soriano was ready. Nonetheless Melvin, in this 1st year as a big league manager went with his starter. Salmon took the first pitch to right for a single. David Eckstein scored.

Too late Soriano was brought in, only to give up a tie-breaking double to The Man Destined to Become Player A. One inning later Troy Percival closed out his 33rd save. We didn't know it, but that was it. The Mariners fell to 3 1/2 games behind the A's and left on a long road trip and by the time they came back home the playoffs were all but gone. The disaster that was 2004 came and we've been here ever since.

Before the first pitch. Before James Paxton arches his back like a bow with a beautiful dad gut for an arrow. Before he pivots, compresses into a ball and springs all his limbs out as far as possible, seemingly to the point of releasing the ball 10 feet from the plate. Before whatever crowd of success starved baseball lovers successfully negotiates Seattle traffic and a Sounders crowd to find their seats before 7:10. Before any of whatever is going to happen happens it's important to realize where we've been and where we are at.

Today happens because Kyle Seager has spent his entire life getting better at every facet of baseball, until he stands amongst the best players in the game. It happens because Robinson Cano was paid a fortune to be here, and because he had the courage and confidence to leave baseball's oldest and richest empire in attempt to build one of his own. It's because Felix Hernandez is actually what we grew up thinking all sports heroes were. 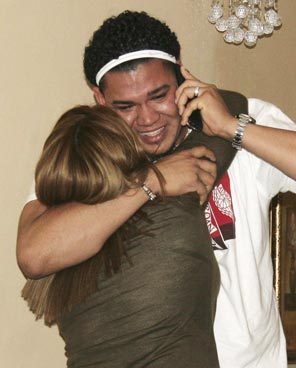 Today is whatever the hell happened last September between Jack Zduriencik and Eric Wedge, leading to  Lloyd McClendon's hiring. It is every empty, lonely time you spent in Safeco during the last decade, shivering during a cold May Tuesday as the Mariners lost to the Rangers/Twins/Red Sox/Angels/Every team.

This decade. The last 10 years. Is it over? Is this some brief respite in a Cormac McCarthy novel, where the main characters share a moment of relative tranquility before being plunged into further torment? Ceaseless losing and never ending irrelevance have left us even now not really sure what to do, or how to feel. Since the last time the Mariners regularly filled their stadium and this city's consciousness two different footballs have become undisputedly the King and Queen of Seattle's imagination. Winning and/or newness have an appeal that draws to all of us, and it is impossible to blame anyone whose attentions have waned over the years of Figgins', Silvas, Bradleys, Lopez', Wilkersons, Vidros, Washburns and on an on. 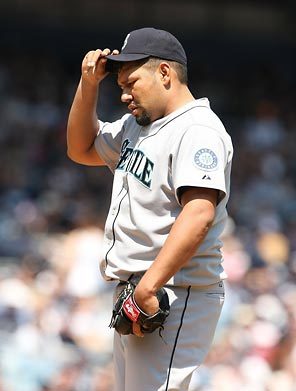 There's been a good deal of talk recently about attendance and the accompanying hand wringing about not only what it means for the Mariners but what it says about us as a people, whether we really like baseball here, what kind of sports fans we are, etc. The same old conversations we always have, rebutted by the same binary counterpoints, and on and on down the cycle it goes. Ceaseless noise for the people who profit off noise due to the fact that we're terrified of silence.

When we first fell in love with baseball we didn't know how to do it. So we did what this city does. We just screamed. We turned the concrete waste of the Kingdome, which was never fit for a game like baseball, into the kind of homefield advantage the game had not seen before or since. We didn't know when the right time was to cheer so at first we cheered whenever a pitcher got 2 strikes on a hitter. By the end of that season we just screamed from the 1st pitch to the last, hoping that like football our players could be lifted to victory through the united expression of our will.

When we first fell in love with baseball we didn't know how to do it. So we did what this city does. We just screamed.

I was born here. 26 of my 32 years have been in the Pacific Northwest. I watched this team almost leave this city. I watched another team pack its moving trucks to leave before it stayed. I watched another one actually leave, and I miss it everyday. There is not a doubt in my mind that this city loves the Mariners. I know because I'm a part of this region and I love the Mariners. I know because of you, because of days like that.

For those of us that grew up here our baseball fandom is like everything else; we are a new metropolis, still ascending towards the gilded golden age our bratty, spoiled descendants will cling to and hold over others not so fortunate as to grow up in this spectacular area. We do not draw our heroes from a Ken Burns documentary because they are being created right in front of us today, tomorrow and Sunday. You can have your Mantle, put a flower on his grave and read his biographies. I'm going to watch my King tomorrow at the height of His glory. I will witness first hand the deeds that lead to the stories other places, long-since waning and overburdened by the weight of their own insufferable history, can only experience through memory.

We, you, I, Felix, Michael Saunders, Lloyd McClendon, Kevin Martinez and his hearty band of marketers, our neighbors, my kids, our friends, etc. today is for us. The Moment is here. Like any opportunity the moment is just the sliver of ice above the water. Below the surface of time lays the mountain of labor, endurance, pain, work, work, work, that has gone into what can start over the next three days.

Are you tired of the Mariners using 1995 and 2001 as crutches as they cripple themselves across season after season? This team is healthy, whole and ready. If they make up 1.5 games in the next 2 1/2 weeks they will host a playoff game and this city and its people will do what we do: We will shine with a radiance only a few places on earth are capable of. The Moment is here. Let's get it.