Mike Zunino and the potential for catcher fatigue

Mike Zunino has had a rough time offensively as of late. Is this decline related to the large number of innings he's spent behind the plate? Maybe.

Share All sharing options for: Mike Zunino and the potential for catcher fatigue

This year, Lloyd McClendon has garnered ample praise in regard to how he's managed his bullpen. This recognition seems pretty well-deserved (although having a good rotation has certainly made things easier on him). With arguably the best bullpen in the league, it would be pretty tempting to overuse his relievers and run them into the ground. However, despite Lloyd's propensity to sometimes remove a starting pitcher who appears to be cruising (e.g., no CG for Felix this year), Seattle has used their bullpen a league-average amount (435 IP vs an MLB average of 437 IP). Lloyd has done a solid job of balancing the amount of innings thrown by his rotation and by his bullpen.

However, when it has come to using his starting catcher, Lloyd has shown considerably less restraint.

Catching more than 1100 innings in a year (which Zunino is on pace to do) is a fairly rare feat. In Seattle's 37 seasons, this has only occurred seven times. It should be noted that although an individual's skill plays a major role in how often he starts, having one catcher start so frequently is also largely influenced by team-related circumstances (injuries, lack of depth, questionable managerial decisions, etc.).

Mike is on pace to catch the fifth most innings in a single season in Mariners history. Although Lloyd's decision to use use Zunino so frequently is understandable (he's already one of the best defensive catchers in the league, he has some Herculean pop, and the alternatives on the roster are terribly underwhelming), I wonder if being used so often is somewhat responsible for Zunino's offensive decline as the season has progressed.

First, how does Zunino's usage this season compare to what he's experienced in the past? 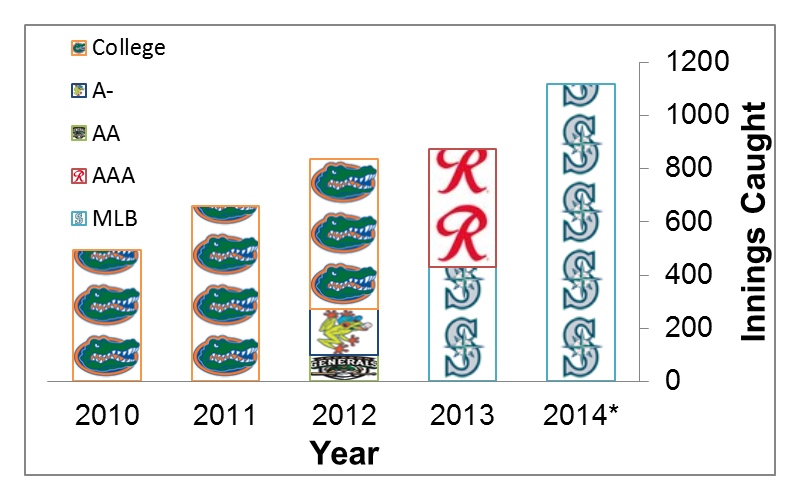 Looking at Mike's track record as a catcher, we can see that he's steadily increased his catching duties over the past several seasons. However, his projected increase between last year and this year (~250 more innings) would represent the single largest increase in innings caught. Pair this with the fact that catching at the major league level is almost certainly more strenuous than catching in the minors/college, and his increase in work load appears to be quite significant.

This is a pretty interesting article (published a few years ago on Baseball Prospectus) that goes into a lot of detail analyzing catcher fatigue. It's fairly pertinent to the concerns that I have in regards to Zunino, but they looked at performance based on plate appearances as opposed to innings caught. It seems like catcher fatigue would be more strongly tied to innings on the field as opposed to at bats. These days, many big league catchers spend a fair amount of time DHing or playing 1B. This is a way to give a player a mini-break while keeping their bat in the lineup. Zunino, however, has only a single appearance as a DH this year. More than 99% of his plate appearances have come as a catcher! Therefore, Mike's offensive output correlates more strongly to his number of innings caught than the average catcher. This makes it more difficult to directly compare Zunino's fatigue curve with those of other catchers. Anyway, to get an idea about how Mike's offensive numbers have fared as his innings caught have increased over the season, we can look at his performance (OPS) vs. innings caught: 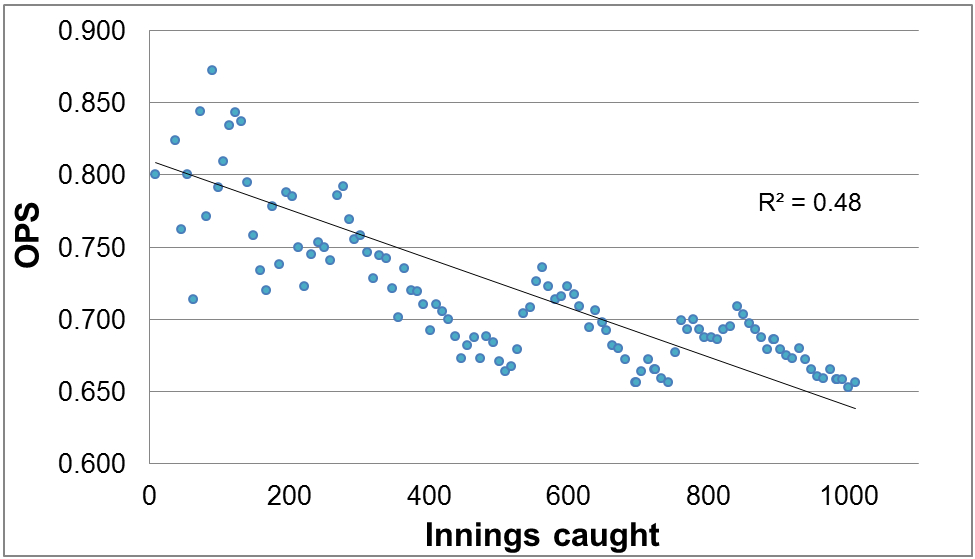 This plot suggests two things: 1) Zunino appears to be a pretty streaky hitter and 2) as the season has progressed, he has struggled more and more at the plate. Although "hitting the wall" is a term generally reserved for young pitchers who are surpassing their previous maximum number of innings pitched, young position players are also known to sometimes struggle with the (brutal) length of the season. This seems like it'd be particularly true for catchers, who play the most demanding position on the field. Although Zunino has put together a few hot streaks in the second half of the season, the length and intensity of these streaks have decreased as the season has progressed. This suggests that fatigue could be having a deleterious affect on his performance.

There are, of course, other potential explanations for Mike's offensive struggles in the second half. They could be caused by the fact that pitchers are pitching him differently and he's failing to make the appropriate adjustments. Or maybe he's been dealing with an undisclosed nagging injury. Or he has fallen victim to an ancient jinx/curse...

Given Zunino's recent struggles, it's easy to be tempted to second-guess Lloyd's management of Zunino's playing time. Maybe if Mike had been given a few more days off earlier in the season, his offensive decline in the second half wouldn't have been quite as dramatic. It sure would be nice to have a not-terrible bat at catcher in the lineup during the last three weeks of the season... Of course, if Zunino was held out of those earlier games, maybe the Mariners wouldn't even be in playoff contention right now. Maybe the defensive advantage that Mike brings outweighs any mounting offensive disadvantages triggered by fatigue. As a fan, second-guessing is easy, but it's seldom fun, and it's never useful. At this point, all we can do is root, root, root for the Mariners and hope that Zunino gets a second wind for the homestretch.