Hisashi Iwakuma struggled to get outs and the Mariners' offense had no troubles getting out.

There isn't much to be written about this game. Iwakuma was completely off and mailed in his third shortest start of the season. He lasted 4.1 innings, walked two, gave up six hits as four runs came home to score -- all in 79 pitches. By all accounts it was a bad start by Iwakuma. He clearly was having a difficult time with his control and was struggling to find the strike zone, hanging quite a few pitches a bit too low. 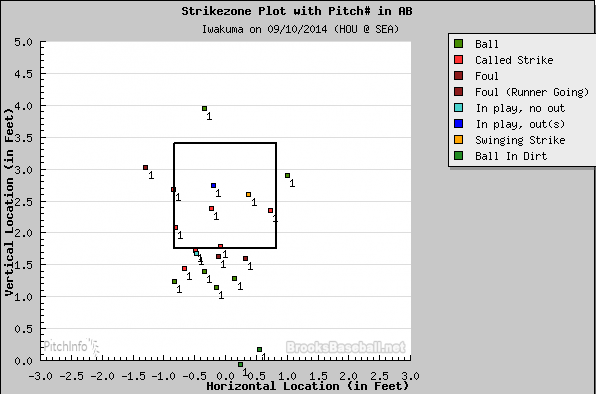 Iwakuma ran into trouble in the second inning and never really settled down too much. It was the third subpar effort from him in his past four games. If the Mariners want to stay in the playoff hunt, they will desperately need the Iwakuma from the beginning of August, not the current version. Tonight's version of Iwakuma doesn't give the Mariners a chance to win when the offense struggles.

Now, let's get to that Mariners' offense. They put men on the base against Nick Tropeano, but weren't able to do any sort of capitalizing on the matter outside of Mike Zunino clubbing a double in the second inning. Tropeano threw 45 of his 80 pitches for strikes, and often the Mariners found themselves in slightly favorable counts. All they could muster were double play after double play after double play. Austin Jackson snared a golden sombrero. The entire offense went without a hit for close to six innings. It was just one of those games. None of it mattered. Nothing matters anymore. I mean, how can you compete when your opponent is able to score runs while sliding on the ground like he is teaching toddlers how to swim?

This game is extra frustrating because the Mariners lost a shitty game to a shitty team. They also did so on a night when the Chicago White Sox came back to top the A's and whichever AL Central team isn't in the lead also lost. It was an opportunity to gain ground on two of the three teams they need to gain ground on, and for the second straight night the Mariners held out used toilet paper as a white flag.