A brief look at how Yoervis Medina is the worst while still being totally fine and ok.

Share All sharing options for: Dead horses and Yoervis Medina

If we are going to attach a name to the act of observing Fernando Rodney pitch then what are we to do when we try to explain Yoervis Medina? The Fernando Rodney Experience, we call it. It sounds like a particularly harrowing ride at Six Flags, maybe even something like The Verrückt. But even the most hellacious thrill ride is designed to impart the illusions of imminent destruction. Fire, disaster, calamity, they've all been permitted, weather-tunneled and lawyered out of our amusement parks long ago.

Yoervis Medina is not properly permitted. Watching Yoervis Medina pitch is bungee jumping over a dry river bed with no helmet and a cord sawed halfway through. Medina is the fireworks left in the damp basement for 5 years. You have to be very, very careful when you handle Yoervis Medina. You'll get some Artz on ya.

Last night, after a 2 out walk to Jonathan Singleton, Lloyd McClendon went out to talk to Medina prior to his match up with Matt Dominguez. Via ol' Hit Tracker here's Dominguez' dinger chart for 2014: 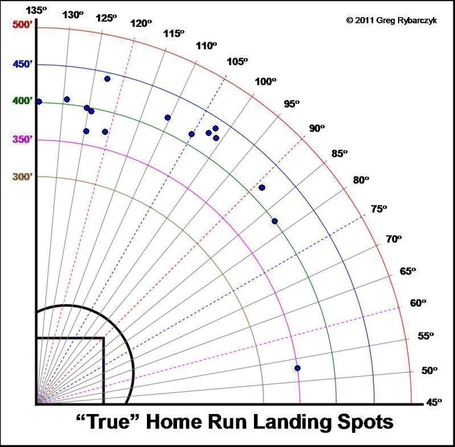 Mariner color commenter Mike Blowers, who I have a sneaking suspicions knows a hell of a lot about advanced stats, immediately noted that the plan was to stay off the inner half to Dominguez. As Mike Zunino flashed the sign for the first pitch Blowers piped up "Fastball away" and that certainly seemed to be the idea: 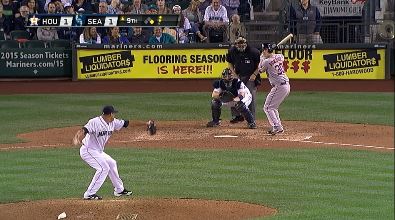 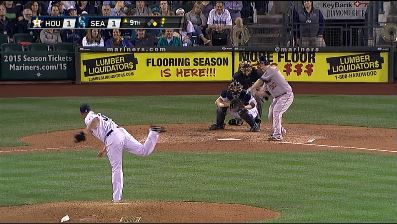 Maybe if we try this again? This time Zunino set up much more deliberately at the low, outside portion of the strike zone: 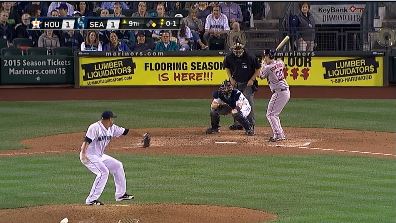 As the kids say, welp: 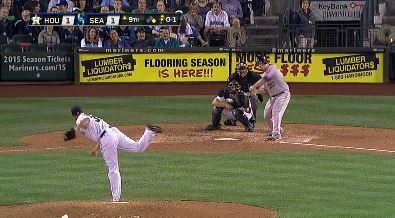 This isn't a new development of course. Medina has long profiled as the classic high velocity, low command reliever. His volatility isn't volatility without both some bad and some really good. Indeed, despite the 11.1% walk rate Medina has largely been an effective member of one of if not the best bullpen in baseball.

Yet I can't stand him and I feel like I'm not alone in that regard. Everytime he comes in I roll my eyes, kind of like I'd like to think this guy does as well. There's something about adding an extra factor of unpredictability into a sport that already has a high margin of randomness. We want stable compounds in our baseball. Otherwise shit can explode.

But, and I think here's where I circle back to defending Lloyd McClendon somewhat, however he got around to using Yoervis Medina as his primary right handed set up guy he hasn't been "wrong". At least not in a shallow, results based sort of way. Given the way 9th played out last night Medina was as much done in by the fickle BABIP Harlot as he was his own poor command. Matt Dominguez clunked a ball in the hole between 3rd and SS. Jonathan Villar hit a grounder an inch past Robinson Cano. Jonathan Villar took away about 3 hits last night. Michael Saunders missed a home run by about 5 feet. Singleton missed a home run by about an inch. Etc.

At the end of the day Yoervis Medina is a high strikeout right hander with poor command. He has 15 Shutdowns against 6 Meltdowns this year. I find watching him pitch to be untenable and would not be sorry to never have to do it again. Lloyd McClendon doesn't care even a little bit how much I enjoy watching his games. He probably shouldn't.