Chris Young had the worst outing of his career as the A's beat the M's 6-1.

Share All sharing options for: Mariners celebrate Labor Day a little too literally, don't show up to work today

In the eighth inning of today's game between the Mariners and the Athletics, some bozo pulled out a beach ball and then threw it down into the right field bleachers, where it bounced a few times before ending up at the feet of Josh Reddick. It was picked up by this kind security guard, probably named something like...oh, I don't know, let's go with Larry. 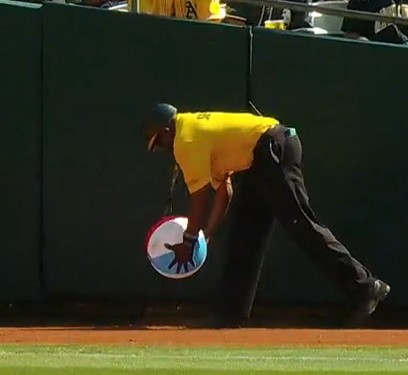 Larry took the beach ball back over to his chair next to the Mariners' bullpen, popped the thing open with what appeared to be a sharpie, and then took a very long, labored look to see if there was anything inside that beach ball. 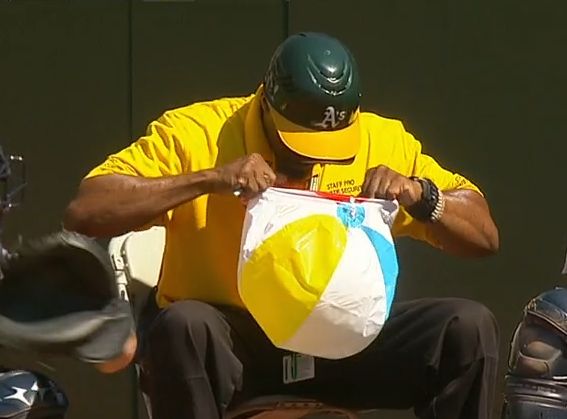 What I want you to do now is to think about that beach ball like it was the Mariners playing this here baseball game. The Mariners/beach ball were smuggled into O.Co/September contention, then violently released by shaking hands on a wild adventure, bumbling and stumbling down the rows of seats/August series to make their way to the Oakland grass below where there was a baseball game to be had. They may not have belonged there, but they were there: whether the whole journey was right or wrong is besides the point.

Well when Larry popped open that beach ball to see if there was anything locked away deep inside--you know, maybe some other reason for being down there on the field--he found this: 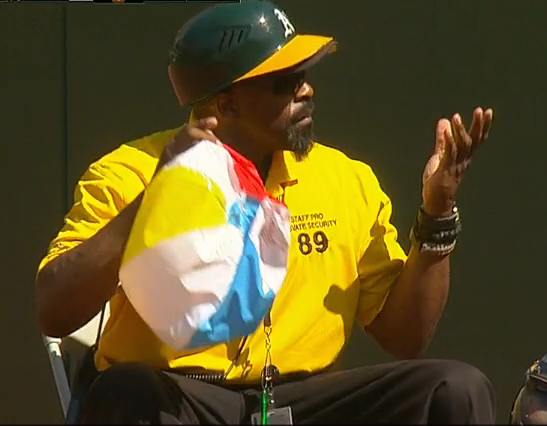 Nothing. Nothing inside. Unlike the beach ball, the Mariners don't have nothing inside of them. But what they did have, today anyway, amounted to pretty much the expression on Larry's face, and it wasn't the way they wanted to start the first September of contending baseball the franchise has really seen since the last cycle of Spiderman movies. With nothing inside. So how did it happen?

Well, it was one inning, really. Chris Young had his shortest career outing today, getting pulled in the first after giving up 4 hits and 5 runs with 2 walks. It unfortunately seemed to reignite an Oakland club that had been sliding downhill to an historic collapse, and even more obnoxiously, it started with this:

This is a video of Adam Dunn hitting a two-run homer in his first at-bat as an Oakland A, and you couldn't script this better if you were penning the sequel to Moneyball. And that's what's so goddamn frustrating about all of this.

See, what you could do is break apart what Chris Young did today, like looking at this at-bat that resulted in a double to Josh Reddick. 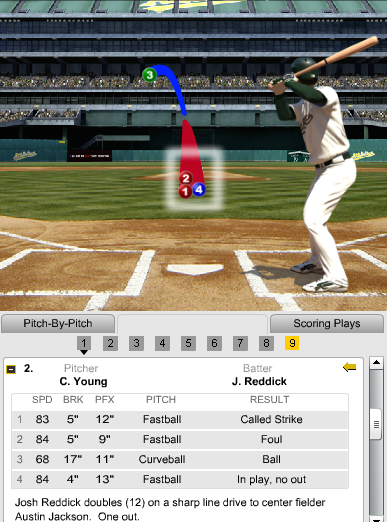 What you will notice here is that while Young always leaves stuff up, he actually left stuff down for him, which is down in the middle of the zone. Like the part of the zone that the ball goes to in video games when you don't press any buttons to make the pitched ball move or bend. This is bad, and while Chris Young doesn't seem to be mechanically broken or anything he certainly seems tired--83 on his fastball, very little movement, you name it. Many have been harping the regression line on Young for a while, and while this isn't the kind of regression we were all referring to, it's regressing in a way: the starters the Mariners relied on earlier in the season seem to be having serious issues right now, and it could be dangerous for the upcoming month of division play.

You could do all that. But what you could also do is be annoyed that the Mariners may have just handed a momentum shifting win to a struggling A's team they just had in their sights. When Chris Young gave up 5 runs in the first after about seven minutes, there was a tangible energy radiating from a team that was just called "pathetic" by their own manager, and while the A's have to face the M's more in the coming weeks, part of you may think this day could be an important one to the whole narrative going forward.

You could do that, too, even though it would be a little silly. But what you should do is look at this whole game and realize that Taijuan Walker, called up from Tacoma for long relief just this morning, had a hell of an outing pitching in a game that was already lost. A hell of an outing that probably wouldn't have happened had Chris Young even lasted 7IP with the same score. What Taijuan did today--6 hits over six innings with only a single run, 5 strikeouts, and 61 of his 89 pitches as strikes--was to prove that he could start a game for a contending team. He basically did have a start today, when you look at that box score.

When Walker was first recalled this morning, Lloyd had mentioned that it was "possible" Walker could be moved to the rotation. Whether he will be or not remains to be seen, but the Mariners just lucked into having that test happen on the first day of the month instead of slowly over three weeks of random blown games where a long reliever is necessitated, because you probably don't have them pitching any other way. Think about that for a minute. The Mariners were never guaranteed to win every game against the A's this month anyway--and they got something great out of what was otherwise a magnificent shitshow of a ballgame.

Now don't get me wrong--watching the Mariners get only three hits off Jason Hammel, who previously had been struggling like the Dickens, was frustrating. Those three hits--gap-finders from Kyle Seager and Endy Chavez as well as a solo home run from Brad Miller--were the only moments of visible competency by an otherwise charmingly poor outing from the Mariners. Jackson? 0-4. Ackley? 0-4. Cano? 0-3 because he was pulled to get Stefen Romero a gimme at-bat in the ninth, white flag waving. Mike Zunino swung at some pitches near his ears. Justin Smoak somehow found a way to look even worse than he did back in April, swinging at a number of pitches by simply pushing his body and bat toward balls that were rolling past the plate on the ground.

So yes, it was a doozy to watch. It must have been a doozy to play, too. But luckily it's still early enough to drive home, sleep on it, and give it another go tomorrow. The Mariners have some glaring issues to address in the coming weeks. If they got anything out of today, it was a starting pitcher with only 20 innings work on his arm ostensibly ready to join a fatigued rotation that could use reinforcements. Take one more look inside that beach ball, and see if you can find despair. Anything? Any despair, Larry?