The Mariners beat the Braves on Wednesday, 7-3.

When Logan Morrison hit his three-run homer in the bottom of the third inning, something strange happened. The strange thing I'm referring to is not the fact that Logan Morrison hit a ball in the air that wasn't caught, or dropped, or sent back above the Safeco Field press box. No, the strange thing is that after it landed in the seats out in right field, the camera cut to Robinson Cano in the dugout, who was elatedly pumping his fist in the air. It looked like this: 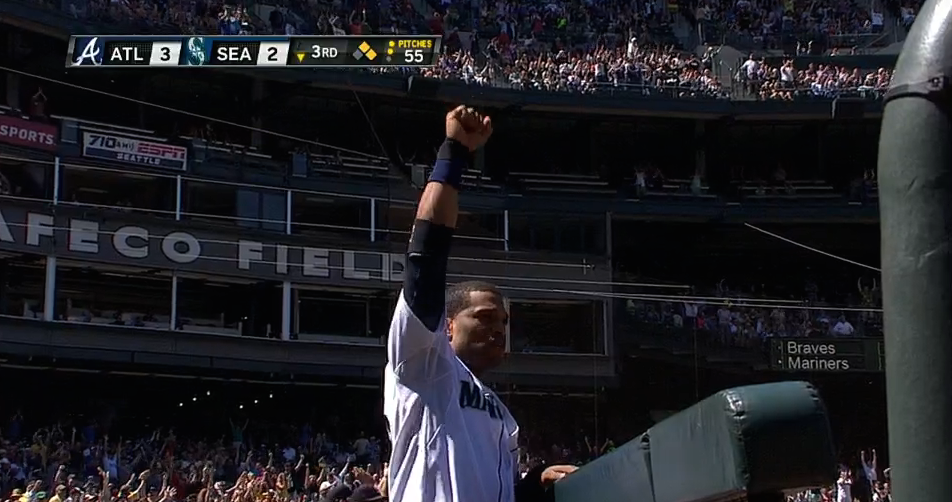 Another kind of interesting part of this picture is that if you look behind Cano, there are a whole bunch of other people seemingly mimicking him, arms outstretched, filling what is usually a sea of plastic green with bodies that jump ump and down and make loud noises. You see, this is somewhat of a strange thing. It's not strange because there were 30,770 people at Safeco at a midweek afternoon game against a baseball team with an inflated market thanks to the reach of Ted Turner's satellite feed from the 1980's. It's not even strange because the Mariners starting first baseman hit a home run, although for a while that was something to gawk at.

No, it was strange because the Mariners had given up their lead to the Braves in the third inning, after Chris Young walked in a run and Freddie Freeman hit an RBI double to make it 3-1 Braves. Dustin Ackley hit a solo shot in the top of the third to bring it within a run, but then Morrison whapped an 0-1 hanger out past the fences and the place erupted with a jolt of energy that felt like you were watching the Cardinals play the Giants on a Sunday Night Baseball.

You see, this is a weird thing, because the Mariners aren't the kind of team that ESPN wants to broadcast on Sunday Night Baseball for exactly the reason why this 3-run shot from Logan Morrison was weird--when the Mariners fall behind, it can often feel like the whole thing is over--at least after twelve consecutive strikeouts and soft grounders anway. It's not that the Mariners don't win, or can't score runs, but multiple and dramatic lead changes in their games are about as common as a line of uncalculated irony-free dialogue in a Coen Brothers movie. It just doesn't really happen.

So if you're still following me here, let me sum up the course of events leading up to this lead change. First, Chris Young had a clean first inning, even getting a run of support in the bottom of the first on a Kyle Seager RBI single that sent Dustin Ackley through the plate. But then after a quick second, Young loaded the bases and then walked in Tommy LaStella to tie the game up. That aforementioned Freeman double made it 3-1 Braves, and a tiny part of you felt like that was the game. Well, knowing what this offense usually does, anyway.

But that Morrison dinger honestly felt like more than just a three-run shot in a close ballgame. It's not that this team appeared competent on the diamond for the first time today, but for the first time, they looked like the kind of baseball team that the national press talks about, because they were doing things, stringing together hits and runs, and most of all, looking invested and excited to be winning.

I realize I'm only talking about aesthetics here, but in a way, that's kind of exciting too. The Mariners would go on to add another run and then win this baseball game, 7-3, but the only thing I think I will remember about this game in a week is that image of Cano in the dugout. It felt like the kind of thing Michael Morse and Jayson Werth would be doing in the 2012 postseason. Hunter Pence making a goofy speech to all the Giants in the dugout before each game. Coco Crisp doing that wiggle dance thing while they were in the middle of a miraculous comeback. None of those things actually win baseball games, but damned if we can't want our guys to be part of the hype club, either.