Well the Mariners woke up this morning and took one look in the mirror and bit their lip until it started bleeding. Staring back at them was the visage of a three game losing streak, beginning with an embarrasing 12-4 blowout by the worst team in baseball, and concluding with a dinger-laden burial under the shovel of one of the best teams in baseball. Playoff hopes were not necessarily on the line, but were beginning to singe at the corners like a piece of kindling shoved into the fireplace by a three-year old who shouldn't be around an open flame yet. Nerves were mounting. Stomachs were on edge.

Then, the Mariners made eye contact with all that tumult, and instead of cowering away, offered up a hearty Fuck You and beat the Washington Nationals on Sunday, 5-3 thanks to whatever is happening inside Dustin Ackley's beard and the steady clockwork of Hisashi Iwakuma's arm. It wasn't enough to wash away the bad taste of the previous three games, but it's a start--and it was certainly an important win considering how far down the hill the Mariners would be tumbling with even one more consecutive loss.

Today the Nationals struck first after Iwakuma picked right up where he left off on his worst career outing in Boston last week. He was certainly better, but was still having a bit of trouble finding the edges of the plate, forcing him to come back inside and dangerously dance inside the red of the zone. Iwakuma is a corner thrower, and when he can't do that, this kind of stuff happens:

Yikes. I'm assuming you're a Mariners fan if you are here reading this, and likewise, I'm also assuming that this made you upset. But if you like baseball, then wow. You just saw something absolutely incredible happen by someone who will ostensibly still be doing this kind of stuff in 14 years, and that is in and of itself is also incredible. In case you missed it, here is where that ball was hit: 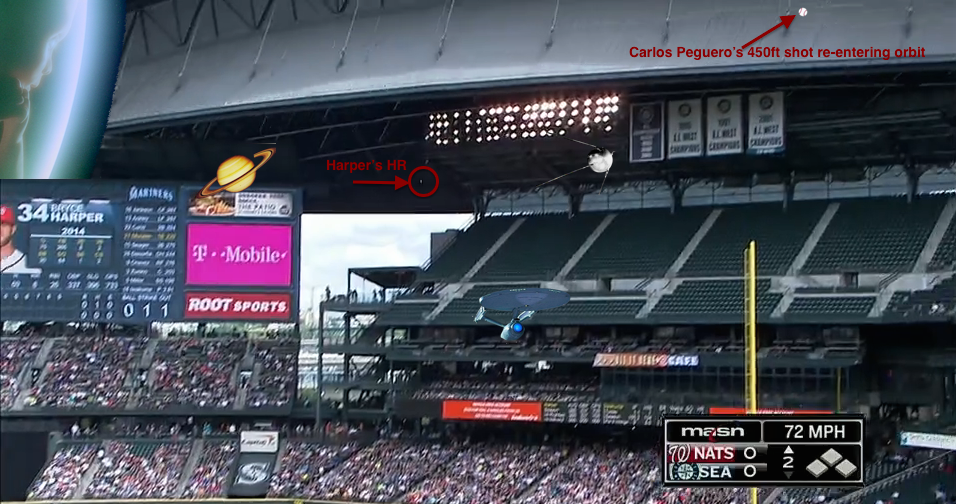 After this, Iwakuma had more trouble into the third, giving up another home run to Nate Schierholtz almost right after Harper's blast an inning later. The Nats were up 2-0, and either the two best Mariners pitchers were beginning their cruel awaited regression, or the Nationals were just doing what they do. Hopefully it was a bit of both, because now is the time to get regression out of the way. I know it doesn't really work like that, but stick with me here.

The M's got a run back in the third after Dustin Ackley singled in Brad Miller from third, who had doubled a few at-bats earlier. Lost in all today's madness was that Brad Miller had a hell of a ballgame, going 3-3 to bring his season average back up to .206. Brad may have lost the starting shortstop job to Chris Taylor earlier this month, and although memories of Brendan Ryan are still dancing in my head at the thought of this, it's nice to realize that the Mariners are about to start a playoff push with a pretty deep infield for the first time in a long, long time. That's pretty damn exciting, even if Brad starts getting more starts over the next couple of series.

Bryce Harper hit another homer in the fourth inning to make it 3-1 Nationals, but the Mariners answered back quickly with a monster fifth inning straight out of some late 90's slow-motion-laden sports movie complete with the song from The Natural that has been parodied so much it has lost all meaning, except actually look at how crazy awesome it actually is. In that film, Robert Redford wasn't exactly allowed to have a two-foot long beard dripping with sweat, even though it would have fit the time period quite well. But we are talking about the Mariners and...well...this isn't the movies, is it?

In our movie, Dustin Ackley took a 2-0 pitch with two on and deposited it out into the outfield seats, igniting the playoff-thirsty Safeco crowd with a moment of rewarded faith, enabling the hope and jubilant excitement that has been making its way through this city for the past month with yet another injection of Possibility and Chance. And although this joke is almost as tired as you all are of the Mariners losing, we should probably check in with Ackley, rounding the bases blanketed by the cheers of 30,000 Mariners faithfuls dancing in the stands above. 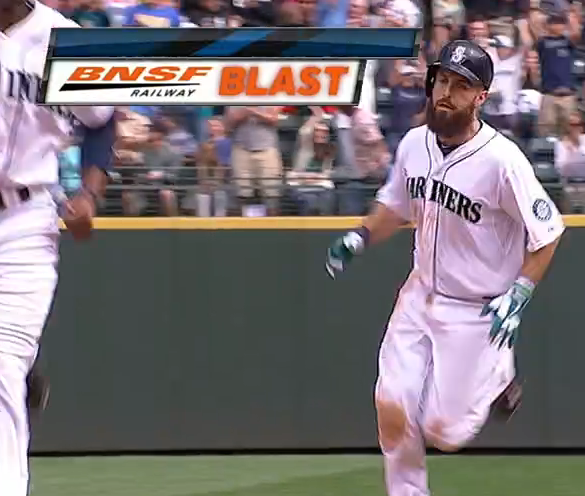 After Ackley's shot, Lloyd saw Harper coming back up and decided to go to the pen in order to, you know, not do that whole thing again. Charlie Furbush came in and got the out, infuriating Harper who was by then apparently dinger hungry. Geez, cover of one SI and...

Danny Farquhar had a little drama, but escaped the seventh cleanly, and was followed in his mastery by Yoervis Medina, who apparently became an elite setupman sometime during the past few months. I don't really know when this happened, but I guess it has, and I'll take it. Oh yes, Rodney threw eight pitches in the ninth and it was all over. 5-3 M's.

Tomorrow the M's get back to the grind, and with the Tigers losing today, they are back to only a half-game deficit in the Wild Card standings. In front of them by four games is Oakland, who the Mariners are about to face for three games. Things are just starting to get interesting, and I hope you will all be here to enjoy it as long as it is.