Despite a late rally, the Mariners looked helpless against a superior Washington Nationals baseball team that still has never made it to the World Series, hahaha. 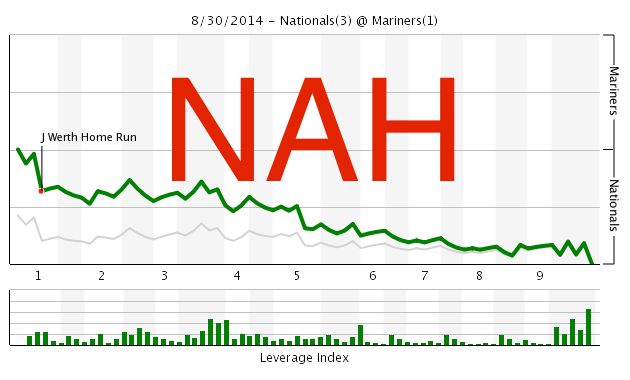 Well, the Mariners lost today, and they lost because they didn't end up scoring more runs than the team they were competing against. When that happens there is usually a loser in the game, but it's not really the sole reason the M's lost today. No, the M's lost today because of this: 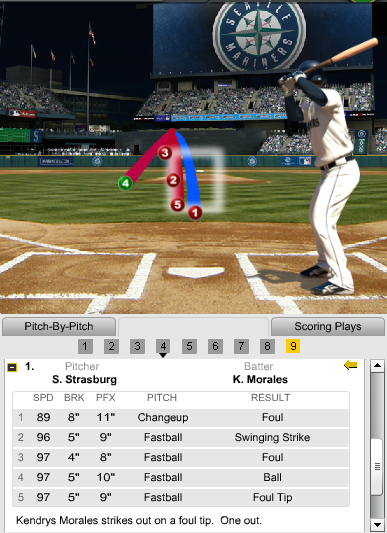 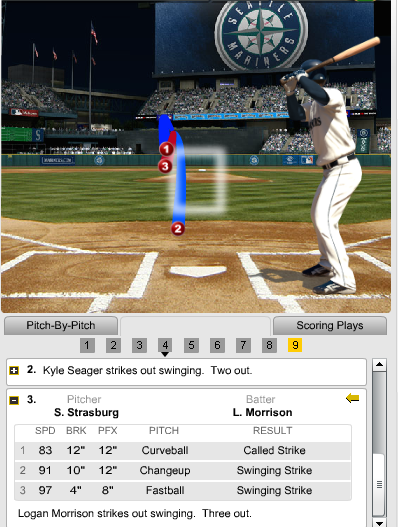 Now, to be fair, the purpose of this exercise wasn't to rag on the often overmatched James Jones, just recalled from Tacoma only twenty something hours ago and in an insane situation I wouldn't wish on anyone except for maybe most of the other players on this team. No, the purpose of this exercise was to gush over Stephen Strasburg, who is a very good pitcher that just pitched a very good game.

Tonight Strasburg flashed a little of what has made him one of the best pitchers in baseball over the past three years, making the M's look foolish without drawing too much attention to himself in the process. You can tell that partly because his line on the night isn't the sexiest thing in the world, but what is sexy is that he had five pitches in the first inning and seven in the seventh. In the fourth he threw 12 pitches, 10 of which were strikes. He hit 98, walked nobody, and then pouted in the dugout after Dustin Ackley took him deep for the M's only run of the game.

That's how good Stephen Strasburg is. He rightfully sat bewildered in the Nats' dugout, having a whispered internal dialogue with himself penned by Terrence Malick because he doesn't always give up home runs to the player that was drafted one spot behind him. Yes, plain and simple, the Mariners were Felix'ed today, and while it wasn't the most enjoyable thing to watch, the whole thing really kind of made sense.

If the Mariners' bats took a while to figure out how to do anything besides make loud whoosh sounds tonight, their defense was actually quite good throughout the evening. This is a strange thing to say, because the game started with this little nugget of beauty thanks to Dustin Ackley and Austin Jackson apparently being off speaking terms while in the outfield: 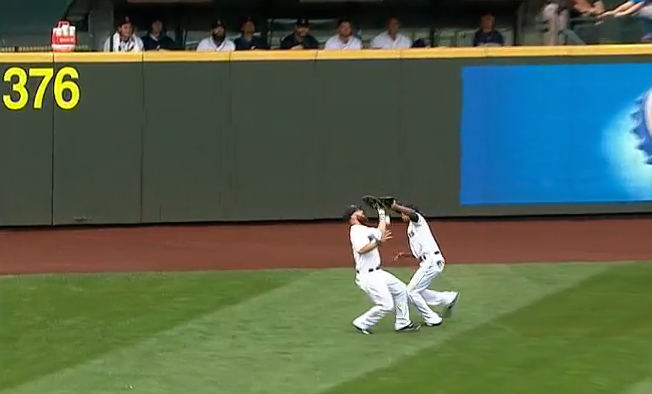 Because of this mishap, Denard Span was on the bases for Jayson Werth's homer--a three run blast--a few moments later. Werth's shot landed above Edgar's, and the whole thing was starting to look pretty bad for Elias. But afterward, he settled down and managed to actually throw a pretty good game, striking out five and only walking two. The zone was a bit loosey-goosey, but I'll let you judge that here because I refuse to blame that on anything except that Oakland nightmare. No instead, the Mariners and Elias were simply victims of a beating by a better baseball team rolling out one of the best pitchers in baseball. Blah blah blah.

Which is awful timing, really. I think we should have words with whoever makes this schedule. April? May? Sure--but after tonight's loss following this week's skid, the Mariners are 1.5 games back in the Wild Card standings, and it should have just been made very clear that all this recent talk of the playoffs doesn't really mean anything if the Mariners don't actually make the playoffs.

Ah, yes, the playoffs. Even though the M's lost, however, they had themselves a little playoff rally practice session in the ninth, hoping that Nats' closer Rafael Soriano was in line for another blown save. After Ackley's homer in the eighth, The Mariners needed only two runs to tie the game--and came just about three feet short from their first off the bat of Kendrys to start the inning. His fly ball was caught on the track, and then it was Seager's turn.

Well Kyle Seager found a hole, and stood on first to watch Logan Morrison strike out looking at a lefty strike. Interim M's manager Trent Jewett apparently owns a ticket right next to Lloyd's seat on the Endy Chavez Express Rail, because right after this it was Endy pinch-hitting for rookie Chris Taylor right there with two outs and one on in the ninth.

Now, this gets kind of annoying. No amount of veteran grit can make a .305 wOBA turn into something, you know, not .305. And even after the fact that Endy somehow whapped a single through the hole to send Kyle to third here, you surely still have to feel this was all a bit strange. But if the Mariners are going to make this playoff push, they are going to need at bats just like Endy's here--and whether or not you agree with this whole 'veteran' thing, he pulled through, used his experience to gain a mental advantage in the situation, and made something happen. Chris Taylor may or may not have been able to pull this off in the same at-bat, and for that, you have to at appreciate the result.

Of course, what that whole paragraph doesn't tell you is that pinch-hitting Endy Chavez to replace a green rookie only put the Mariners in a situation where another green rookie was up to bat, a rookie who is worse than the one that was pinch-hit for. You can't even say that they were hoping it wouldn't come to that, because Endy Chavez was not pinch-hitting to hit a home run, and you know that sentence contains the truth.

Part of this speaks to the depth (or lack thereof) of the Mariners roster, and part of it should help illustrate that veteran grit can really only do so much when you have eight other people on the team who are required to bat around any given 'veteran.' As noted earlier, Jones grounded out to end the game, and that was that. After this, Endy stood on first and picked up all his grit laying around him on the ground, depositing it in his back pocket like it was gold itself, waiting to be spent the next time the game was on the line.

Still, you couldn't help but feel like the Mariners were standing on the edge of a big cliff, ready to get swept away from the precipice with a gust of a dramatic walk-off. You know, the kind of stuff that makes playoff baseball as exciting as it is. None of that happened tonight, but we've got one month left of this. Tomorrow it's Iwakuma, and hopefully, and end to this awful losing streak.