If a batter gets ahead 3-0 in an at bat, they /really/ shouldn't strikeout. Nonetheless, this does still happen... but exactly how often does this occur?

Share All sharing options for: Mariners hitters and 3-0 strikeouts

As a baseball fan, few things are more frustrating than watching a batter on your favorite team get into an ultra-favorable 3-0 count only to see the at bat ultimately end in a strikeout. This certainly doesn't happen often, but the disappointment associated with squandering such an opportunity helps us to remember these events more clearly, which makes it seem like they occur more often than they do.

I think we can all picture it: A batter shows good plate discipline through the first three pitches of an at bat, taking three offerings that were a bit out of the zone. At this point, everything seems wonderful and full of promise. Then, the 3-0 pitch is taken for a called a strike. Next, on the 3-1 pitch, the batter takes a mighty swing, just missing the offering, stinging a foul ball into the seats. Finally, on the payoff pitch, the "hitter" swings over the top of a breaking ball in the dirt. The strikeout is complete and the batter walks sheepishly/angrily back to the dugout, his head hanging in (well-deserved) shame.

Last week, while facing off against Cole Hamels, Chris Denorfia had an at bat that illustrated this sequence perfectly: 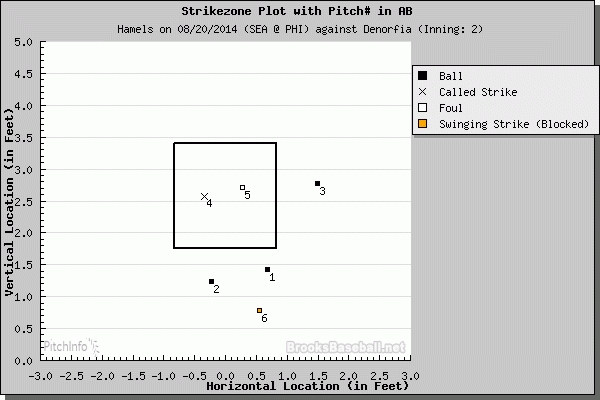 As I watched Denorfia flail helplessly at that changeup down and in from Hamels, I wondered about the frequency with which this sequence actually occurs. Again, it undoubtedly happens less often than it feels like it does, but how much less often? For example, as I think back over the last few seasons, it seems like this is something that Justin Smoak might do at least once a week; this obviously isn't true, but I'm curious as to how skewed my perception is.

In an attempt to be a savvy baseball fan, it is oftentimes required to combine the observations that we make with our eyes with those we discover in number/statistics. Sometimes these two factors seem to be in direct contrast with one another, and I think it's important to be able to identify when this is the case. Otherwise we run the risk of turning into hyperbolic, alarmist fans who proclaim that the Mariners NEVER score runs for Felix and that Justin Smoak ALWAYS hits his fly balls to the warning track.

Looking at this year's numbers, in 179 opportunities (I considered non-IBB plate appearances where hitters have gotten ahead 3-0), the Mariners have ended up striking out... eight times. Eight. This strikeout rate of 4.5% is the sixth lowest in baseball. The range of the K rate in this scenario is actually quite large, going from less than 3% (Yankees) to more than 11% (Giants).

Here, we can see that the average team has a batter get into a 3-0 count once or twice a game; however, these players are only striking out once every 10 or 11 games. This surprised me a little bit; I'd thought this rate might be a bit higher. Hooray for disproving my misconceptions! Interestingly, this data also shows that the Mariners have the second best OPS after a 3-0 count (1.352); only the Brewers have performed better. Go M's! Unsurprisingly, this success has been driven largely by the Mariners pair o' offensive superstars: Robinson Cano and Kyle Seager.

(When looking at the performance of individual players, these numbers definitely fall into the "small sample size" category. It would be prudent to keep this in mind.)

I also looked at these stats for for every batter who has seen a 3-0 count this year. Among players with at least 25 3-0 PA, Cano has the highest OPS of anyone in baseball (1.927!!!). Seager also has the second largest number of 3-0 PA (32) without being struck out. (Carlos Santana has 37 such plate appearances without a K.) Once they've gained an advantage, Cano and Seager tend to make pitchers pay dearly. Additionally, only three Mariner regulars have suffered the indignity of striking out after reaching a 3-0 count this year. I'm not sure whether  this speaks to a team-wide philosophy that emphasizes plate discipline when one is ahead in the count or if it's just happenstance and serendipity. Either way, it's workin' for them. There aren't too many offensive highpoints for the M's this season, but their approach after getting to a 3-0 count certainly appears to be one of them.

Finally, in direct contrast to my aforementioned perception of Justin Smoak, Smoaky has ZERO 3-0 strikeouts this season in 20 opportunities. (He also didn't have any 3-0 strikeouts last season! Although, way back in 2011, he did have six. In 32 opportunities. That number is tied for the most by a Mariner in a single season since at least 1988: the first year when baseballreference keeps track of splits on different counts.) I guess those negative impressions are hard to shake.

A few other quick/interesting tidbits that I stumbled across while compiling this data: