Share All sharing options for: 72-59: Everything is as it should be

This isn't an easy recap to write because you probably didn't watch the same ballgame I did. You saw a team disassemble a far inferior team, the way baseball works seventy percent of the time. You watched as James Paxton pitched 6.2 innings of scoreless ball on a rough day, employing 3.28 FIP worth of luck. The Rangers were herded toward victory in a fine display of animal husbandry, and everyone felt great about themselves and complimented strangers. Scott got on TV. Neat.

I wish I had seen that game. Mine wasn't so great. My one year-old, who attended my living room for the event, had one of her meltier meltdowns in recent memory around the second inning, and I spent bulk of the action with a third of an eye toward the screen. Between pitched cries I caught the low rumble of Jay's sultry timbre, espousing the importance of lineup protection and why it's okay to throw baseballs at people sometimes. When I did look up, the position of the center field camera (has it always been this bad?) forced me to apply the Pythagorean Theorem to every pitch. Even Paxton's leg kick was super annoying to me somehow.  Do you not care about your mechanics, James?

Fortunately, baseball is like life, and everything will be forgotten tomorrow. The majority of fans will revert to being selfish, forgetful and generally ethical people, and I will revert to being a jocular ne'er-do-well and a passable father. Basically all the good teams won. The standings will not have changed, only incremented. We will all be slightly more serious tomorrow.

What objectively occurred in the external world:

Robinson Cano took a well-placed, low curve in the first and pulled it six rows deep into the right field seats. It was the swing of a 25 home run hitter, which is of course what Cano is, even though he's not going to hit 25 home runs this year. Baseball is like that.

Paxton pointed out the side in the second, drawing two infield pop-ups and a lazy center-field fly. I love pitchers pointing at fly balls so much. It's not because they're trying to be helpful or dictatorial, though perhaps they are; I think it's just a reflex, some buried piece of instinctual code, a redirection of competitive energy. It's purer and less ostentatious than the bat flip, quicker than the high five. That's all I can say.

The Mariners scored their second run on a grounder up the third base line by Jesus Sucre, which provided the game's only true highlight.

What made it possible was a nice display of patience when Rangers starter Nick Martinez accidentally held the left button down on his internal D-Pad. As a team, the M's walked five times and struck out twice. I challenge you to find another game this season with a ratio like that. Seriously, go do it. I'm too tired to look it up.

The rest of the action came in the fourth, where with two aboard Endy Chavez hit a double over a shocked Daniel Robertson's head. Because of the limitations of television, I couldn't see how far onto the infield dirt Robertson had positioned himself before the pitch, but his hopeless sprawl afterward was the perfect representation of a man who, like a boy who walks into the wrong restroom at school, knows his honor will never really be whole again. Ackley followed it up by lining one eye-level through the dotted outline of where Nick Martinez had just been, giving him 0.38 seconds to re-evaluate the benefits of the padded cap.

The rest was dénouement. Paxton didn't have his best game, seeing a lot of three-ball pitches, but he missed low and somehow translated a 58% strike rate into only three walks, one to his last batter. For the sake of the bullpen, Lloyd pushed him to 118 pitches, but he actually found a little velocity somewhere during the game and finished still throwing mid-nineties. So that was neat. 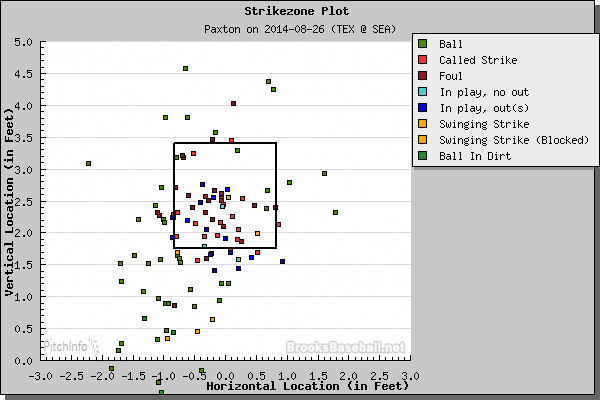 Farquhar finished it off with some blameless pitching. The Fernando Rodney signing was pretty great on the face of it, but one of its underrated aspects is that the team gets to use a great pitcher like Farquhar in these types of situations, cleaning up forgettable little spills and making next to no money doing it. Yes, he's good enough to close, but then we'd have to pay him to close. Instead we'll pay Rodney to close, and when it comes time, our cheap breakout closer from 2013 might be our cheap breakout closer again in 2016.

Tomorrow we can go back to worrying about whether Jack Zduriencik deserves our scorn. Tonight, however, pour yourself a glass of cooking sherry and enjoy having stepped on the Rangers' neck. Necks? Their collective, synechdochical neck.