The Mariners beat the Red Sox on Sunday, 8-6.

Share All sharing options for: Mariners sweep Red Sox despite Rodney's brief possession by the ghost of Brandon League

Today the Mariners did something they have never done before in franchise history.

That thing was watch an All-Star starter have a remarkably terrible outing and then come from behind later in the game to take the lea--no, no, wait, that's not it.

The thing they did today was watch an All-Star closer come out and walk a whole bunch of people in the ninth wh--ah crap, I did it again. The years and names start to blur together with this problem.

Okay, here we go. The thing the Mariners did today that they have never done before was sweep the Red Sox in a three game series at Fenway Park, beneath the vicious daggerstares of tens of thousands of Boston baseball fans who know nothing besides the red and white of their holy empire. Just think about that for a second--the Mariners have been a baseball team longer than the first Star Wars has been out, and they had never done this relatively normal baseball thing--sweep a team--against one that has really only been good about three times during that 37-year span. But today they did that very thing, which seems like a very important thing to note, right?

But here's the thing: you don't care.

The people at Elias Sports Bureau care, as do the Mariners broadcasting team because have you ever tried to fill six hours of airtime by talking out of your ass about anything and everything you can? No, instead this franchise achievement has somewhat come and gone, passing like a train in the night where the lit windows leave behind little dim afterglows in your eye because the train is moving too fast for you to keep up with it. It does that because this train holds 25 men wearing grey uniforms that say the words "Seattle" on them, playing the first meaningful baseball they have played in twelve years, and it can't be stopped for any damn thing. Sweeping the Sox for history's sake is fine. Sweeping the Sox to retain a lead in the playoff hunt is even better. And that's what happened today.

It wasn't all wannabe Hemingway metaphors and roses today, though. Hisashi Iwakuma was responsible for his worst career MLB outing ever, lasting only 2.1 innings and giving up six hits and five runs. Of course, in this implosion he only walked a single Boston batter--David Ortiz--but hit Mike Napoli and Allen Craig back-to-back in the bottom of the first inning. Miraculously, the Red Sox didn't try and retaliate with their baseball police badges burning holes in their back pockets--but this is, of course, probably only because everyone knows that when Iwakuma walks even a single batter something is seriously wrong.

What was wrong? I don't know. But take a gander at the command machine's outing from today, and tell me that this is the Iwakuma that you know and love: 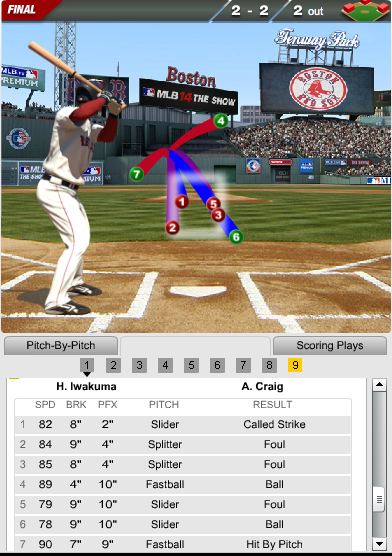 Now this, of course, is strange. If you'll notice, Iwakuma only barely missed his split-finger fastball and slider, painting the outside corners pretty dang well. His problem? Oh, you know, the easiest pitch to throw. Some have speculated that Iwakuma fell victim to the flu bug that has been going through the M's locker room--it took Morrison out of the lineup yesterday and sent Cano barreling into the dugout during the middle of the second inning ostensibly because he had to vomit. Whatever it is, it doesn't seem mechanical, and the Bear will probably be back to his usual self in no time.

This was unfortunate, too, because the Mariners jumped on Red Sox starter Allen Webster from the first pitches of the game, putting up three runs in their half of the first that the Sox matched mere moments later. Austin Jackson led off the game with a single, was sent to third on a Dustin Ackley double, and then was called out at home after Cano hit into a fielder's choice. Kendrys singled in Ack a minute later, and Seager followed with the same deal. 2-0 M's. Morrison singled Seager in and it felt like the game was already over, which, ha! Hope you watched the rest of this here mess.

After Iwakuma came back out in the third, walking Ortiz and watching Cano run for the can, the Sox had two more runs on the board and it felt bad, real bad. But the M's bats continued their recent whatever-is-going-on, and they put up one in the fourth on a sac fly from Chris Denorfia, and then two more in the fifth thanks to Mike Trout Dustin Ackley. Which, hey let's talk about Dustin Ackley for a second.

Okay. Here we go. What in the hell is going on with Dustin Ackley?

Okay, now we are done talking about Dustin Ackley.

We are done because nobody knows what the hell is going on with Dustin Ackley, but he's been hitting .316 since July 1st, and actually has a positive net defensive rating on fangraphs. He has mirrored his UZR rating from the past two seasons (-6.3/-7/7.3), which isn't the most trustworthy statistic but it's a better defensive rating than Adam Jones has. Just think about that for a minute. Now if only his bat would match the former M's outfield prospect so we wouldn't have to think about that stupid Erik Bedard trade anymore and we oh wait what

Um, holy shit you guys. I don't know if Dustin Ackley has arrived, but it would be fun to pretend he has. And even if he hasn't, he's helping the Mariners chase the playoffs right now, and ultimately, that's all that really matters. This is exciting. I've seen people frowny-facing memories of Adam Jones as recently as today's game chart and...um...look at those numbers. LOOK AT THEM.

Ackley added onto his day in the ninth inning, following an eighth that saw the M's tack one on on a Kyle Seager single that scored Endy Chavez, pinch running for Kendrys, from first. Kelly Johnson doubled in Brock Holt to make it 7-6 Mariners, and if you were following any of this, you were half on the floor and on your chair: the AL's best bullpen had a bit of a rough time today, although a spectacular catch by Danny Farquhar got them out of what was about the biggest jam since you can remember:

But yes, Ackley. In the top of the ninth, Ack whapped a two-out single into right field, and then made it all the way home on a double from Brad Miller, who himself has been taking to the reserve infielder role quite well. On paper, Ackley shouldn't have probably tested Cespedes' arm, which he also shouldn't have done on Friday. Except...it worked both times, and today it gave the M's a two-run lead that is just about the only thing keeping emergency rooms devoid of cardiac patients in the greater Seattle area tonight, since Fernando Rodney decided to whip up a masterpiece of drama unseen since the Brandon League days. Here is what happened in the ninth, following a bizarre six-pitch strikeout to Will Middlebrooks that started with a 3-0 count:

Bases loaded. Two outs. Bottom of the ninth. At this moment, the 37,000 screaming fans at Fenway were probably remembering Friday's drama that saw the M's come back in almost this exact situation--eye for an eye, tooth for a tooth. Except it doesn't really work that way. The Red Sox don't need to win because they aren't doing anything this season, and the Mariners do. So they did:

Game over. 8-6 Mariners. Let's take it a little easier next time, shall we boys?