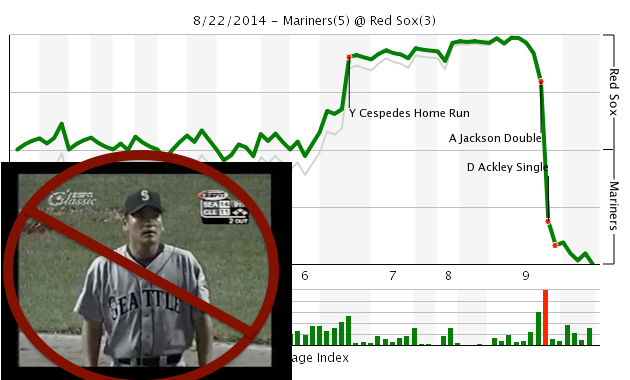 Well I was at a bar in Providence, RI, because I just moved here and the Mariners were losing, and losing bad. Providence is in Red Sox country, about ~45 minutes or so away from Fenway, and I had made a gut decision to go home because I had laundry to do and boxes to unpack and who wanted to watch another Felix game go down the toilet when you were surrounded by sports fans who pronounce the letter 'o' as the letter 'a,' anyway?

So what had happened so far was about six innings of nothing, and then a middle-of-the-lane changeup to Yoenis Cespedes to make it 3-0 Red Sox. You know, another wasted Felix start. I even had the whole recap planned--I was going to paint the whole thing around that one mistake pitch from Felix, paint in a little of the playoff narrative at the end, and then mention how the team was standing on the precipice of a damning losing streak, ready to sink the season.

After this, I was driving home, upset and bemoaning the inevitable M's loss that was only minutes away, but on the way this happened in the top of the ninth, as the M's were facing All-Star Red Sox closer Koji Uehara:

Holy shit. Holy shit. This was some A's 2012 playoff magic. This was some Cardinals vs Nationals NLDS drama. But instead, it was a game fought between the gutter of the AL East and the owner of the second Wild Card spot (well, tied) at the end of August--and that narrative that was going to say "The Mariners need to be careful to not start a dangerous losing streak" suddenly became "The Mariners just completed an unbelievable comeback win that very well could be the catalyst for a playoff push in the coming weeks."

I sure hope so. But before we get there, let's look at the rest of the game, shall we?

My wife was joking with me on the way back to the car that I always end up writing that "Felix was Felix" in my Felix recaps, but today that isn't exactly true. On one hand, Felix was struggling Felix, earning seven strikeouts but giving up the aforementioned sixth-inning bomb off the bat of Cespedes that was, by all accounts, a mistake pitch. The King only lasted 5.2 innings today, and those three runs that the Cuban sensation sent in both upended the streak Felix had been on and made the whole game seem far out of reach, especially by the seventh or eighth inning. The zone was a bit iffy all night, and though Felix had three walks, you cannot blame that for anything.

Instead, what we had was Felix slightly off his game, looking great for an even above-average pitcher but poor for the king of the fuckin universe. Felix wasn't Felix, but he was still incredible. Which is, well, you know. So it was up to the M's bats and one unlikely outing from one of the best closers in the game to give this one to the M's. Besides, the Red Sox don't need another win. They just signed a new Cuban outfielder and are going to win the World Series next year, they can give the West Coast this one for chrissakes.

The M's didn't reach base until the third inning, off the bat of Endy Chavez, who blooped a single into shallow right field. In fact, and I feel like a vampire crawling into a beam of light as I type this, Endy Chavez won this game for the Mariners. He walked three times tonight, which accounts for just about 30% of all of his walks on the entire season. His ninth inning, 10-pitch walk is what turned the comeback from a strained outing by an All-Star closer into an unheralded meltdown.

We've been complaining about Endy Chavez on this website for a while. At least I have. But you know what? Endy Chavez is playing a crucial role on this team, if not on the field then in the dugout, and if you are to take Mike Blowers or Felix or Robinson Cano or anyone else at their word, they would tell you the same thing. It feels strange, for sure. But it's true. Tonight Endy Chavez worked an important, high-stress walk at Fenway Park with playoff implications, and for a second you had to think of Kevin Millar and the Yankees. Maybe. If anything, think of 2004 because Endy Chavez did something amazing, and that in and of itself is amazing and has 2004 written all over it.

There were a lot of interesting things that happened early in this game, such as a weird catch that was initially ruled dropped and then overturned on a replay challenge, Felix hitting Xander Boegarts in the head, then graciously making apologetic eye contact and noting the whole thing was his fault. But the most amazing thing is that the M's were on the other side of an improbable comeback, and the Indians can just forget about it and go home and shut the hell up. M's win 5-3, and wow. Just go look at those videos again and soak it all in. In the words of the ineffable Rick Rizzs, Holy Smokes.

Before I leave, I should note that Felix earned his 200th strikeout tonight, for the sixth year in a row, which no one has ever done in an M's uniform. Do you remember when the New York press was writing about how sad it was that Felix would be wasting his prime without ever making a playoff appearance? Yeah, let's rewatch this game tonight, and send them all a hearty fuck you, signed, dated, and timestamped from the PST, sent from Safeco Field, airlifted out by Alaska Airlines and delivered on a Boeing airplane.

1. Tomorrow I am going to see the M's at Fenway--have you ever traveled to see the Mariners play as the visiting team in an opponent ballpark?

3. What TV shows are you currently watching?