What's going on with James Paxton?

James Paxton's changing release point shows a noticeable trend. Whether or not it's meaningful is up for debate, but the early results are fascinating.

Share All sharing options for: What's going on with James Paxton?

James Paxton might be my favorite Mariner. There's a unique appeal in a player with a vast quantity of upward volatility, especially when said player demonstrates he's capable of reaching it in the face of much skepticism.

That was James Paxton. Though the lefty was an original member of the vaunted Cerberus—a triumvirate that's taken quite the beating since that nickname was formed—he bordered on being an afterthought. He wasn't believed to be the most talented, nor the most likely to contribute to the big club anytime soon.

And yet, there were still whispers. Not confident ones, just the type of thing that when you got a whiff of, it was hard not to let your mind run—that though he might have the lowest floor (a poor man's Bedard? hopefully a good reliever?), he might have the highest ceiling as well.

When he first arrived, this notion echoed back, and did so in booming fashion. James Paxton pitched well, damn well. Spotting upper-90s fastballs and burying a hellacious curve, he pitched like one of the best starters in baseball through hist first six career major league starts. It isn't predictive, nor necessarily meaningful, but it's a thing that happened—and it's interesting.

It was interesting because that wasn't who James Paxton was, not even as recently as the beginning of last year. He was a five-and-dive guy, if that. Before July of the 2013 season, which was spent in Tacoma until a September call-up, he hadn't thrown a pitch in the seventh inning. On July 8th, he threw a complete game shutout. His next start, he went seven full. On July 27th, it was eight. There were still some rough spots, but he'd started to demonstrate a skill that to that point wasn't there. We got a glimpse of this "new" Paxton down the stretch in 2013, reaching its ultimate crescendo in his 2014 debut—he threw seven innings of two-hit ball against baseball's best offense, striking out nine in the process.

Looking back, James Paxton credited a change he made to his delivery. Shannon Drayer spoke to Paxton and others for an excellent profile on the lefty, one where he describes that delivery:

"In college I was a low 3/4, I was almost sidearm," he said. "Now I am probably a high 3/4 and I think that is because that's what was comfortable for me. It's hard to explain the reason why, it just kind of happened. It was very organic, just the way my body wanted to throw. Everyone is different and I feel like you have got to do what your body wants to do and then refine it. This works for me, and I feel it is what gives me such good downward angle on my ball."

He improved that delivery last season by watching Clayton Kershaw, at the suggestion senior advisors to Jack Zduriencik, Ted Simmons and Pete Vukovich, reported Drayer. Pitching coach Rick Waits said of Paxton in the profile, "He had been getting too much tilt." Here's how Paxton, again in that profile, described what watching Kershaw did and how the tweak impacted him moving forward:

"Watching him one day it just kind of clicked to me that where he was bringing back his arm was different than mine and I started thinking, 'OK, why does he do that?' " Paxton said. "I tried it one day and I realized how much easier it was to get on top of the baseball. I practiced it and practiced it and it came pretty easy. It wasn't hard to change that drop back, just bring it up a little bit. It made it that much easier to repeat and just get on top of the baseball."

There were two things that happened since Paxton made this change:

Through Paxton's extended absence, one that stretched from a matter of weeks to four months, I couldn't shake the concerning notion that it might all be linked. Paxton's "new" delivery produced results, certainly, but it hadn't been tested against the beast that is time, a gradual and growing wear and tear. What started as an annoying-but-minor thought morphed into something more when a couple individuals on Twitter pointed me towards something Mariners head trainer Rick Griffin said during an interview aired during James Paxton's first start upon returning from injury (many thanks to Scott Gossett and Trevor Denton for digging this up).

Speaking rather candidly about James Paxton and his injury, a lat strain, Griffin's interview included the following extended quote:

This quote, or people pointing me towards it, actually came in response to something I put out on Twitter. That was an interesting trend in James Paxton's vertical release point. Here's a chart from Brooks, start by start, of the height of where James Paxton is releasing the baseball: 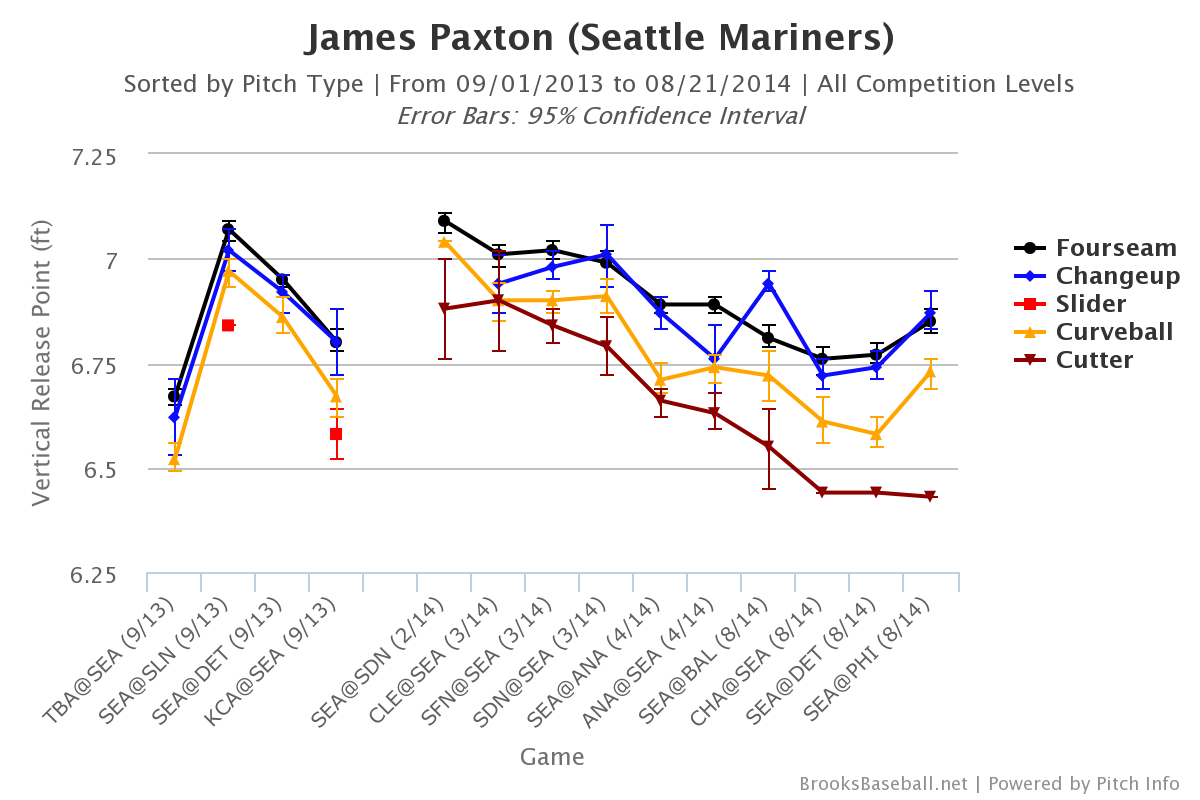 There's a couple things here. First, there's a noticeable downward trend. In nearly every start, the release point is lower than the game before it—with a bit of a reset between seasons. The second thing is that we're talking about a matter of inches here, and not a lot of inches. Between the first start of 2014 and the release point's lowest mark, it might be just two inches, if that.

This level of variance isn't necessarily uncommon. You can take a look at the same chart for Felix Hernandez and see he isn't hitting the same vertical release point every time there either. But still, with Felix, there's no trend. With Paxton, there is—and it's hard not to wonder if there's a reason for it. Right up above, Rick Griffin points to a high over-the-top release point as a potential cause for Paxton's injury. Would it behoove the medical and coaching staff to tinker with Paxton's delivery, one that was changed recently to produce impressive results?

As I mention in the subhead, the bigger question here is whether or not any of this in meaningful. Honestly, I don't know. But what I try to do here, as I've mentioned in my other blind stabs at analytical work, is just share what I look up for my own enjoyment and curiosity.

So with that, I've tried to cut out some of the noise and keep this simple in looking at James Paxton and his effectiveness. It may well be too simple, but here's what I have. The chart below shows whiffs per swing on Paxton's curveball for his 2014 major league starts. While the fastball is a huge part of his game, certainly, let's take a look at how hitters fare against Paxton's out pitch. 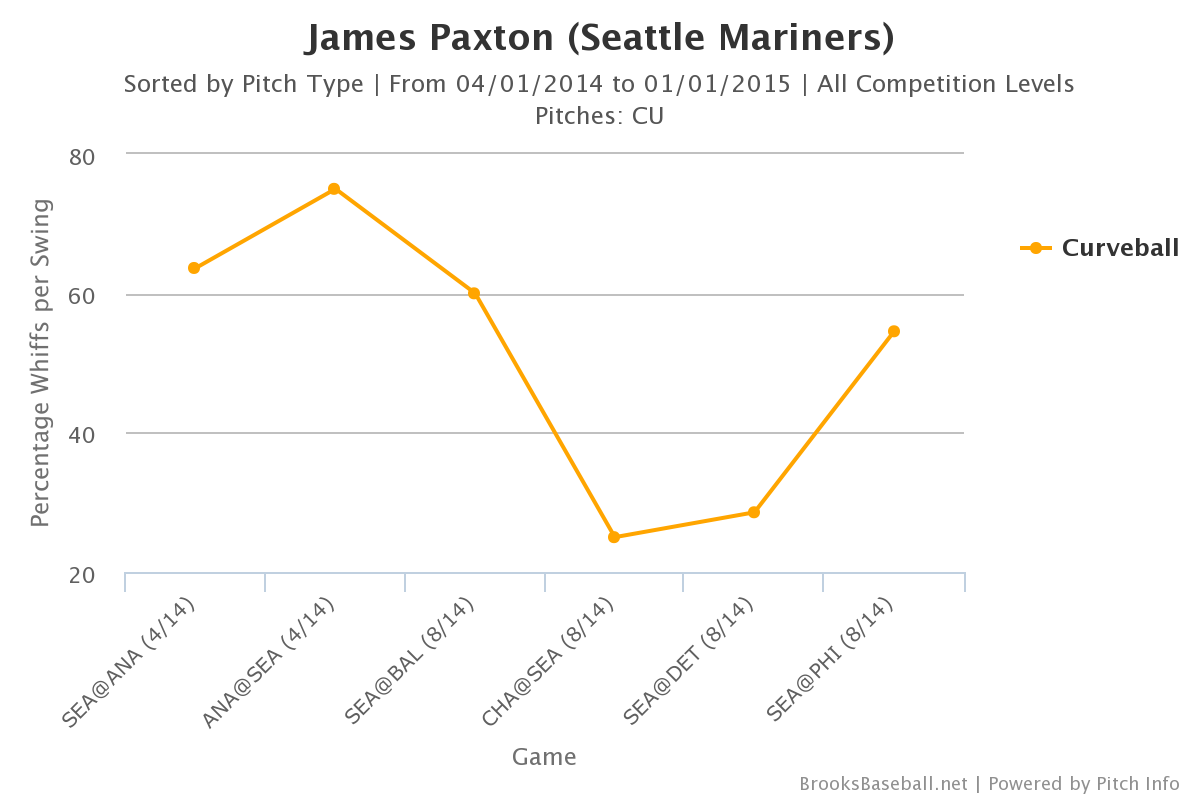 So here, going back and really isolating the relevant data, is James Paxton's vertical release point on the curveball in his 2014 major league starts: 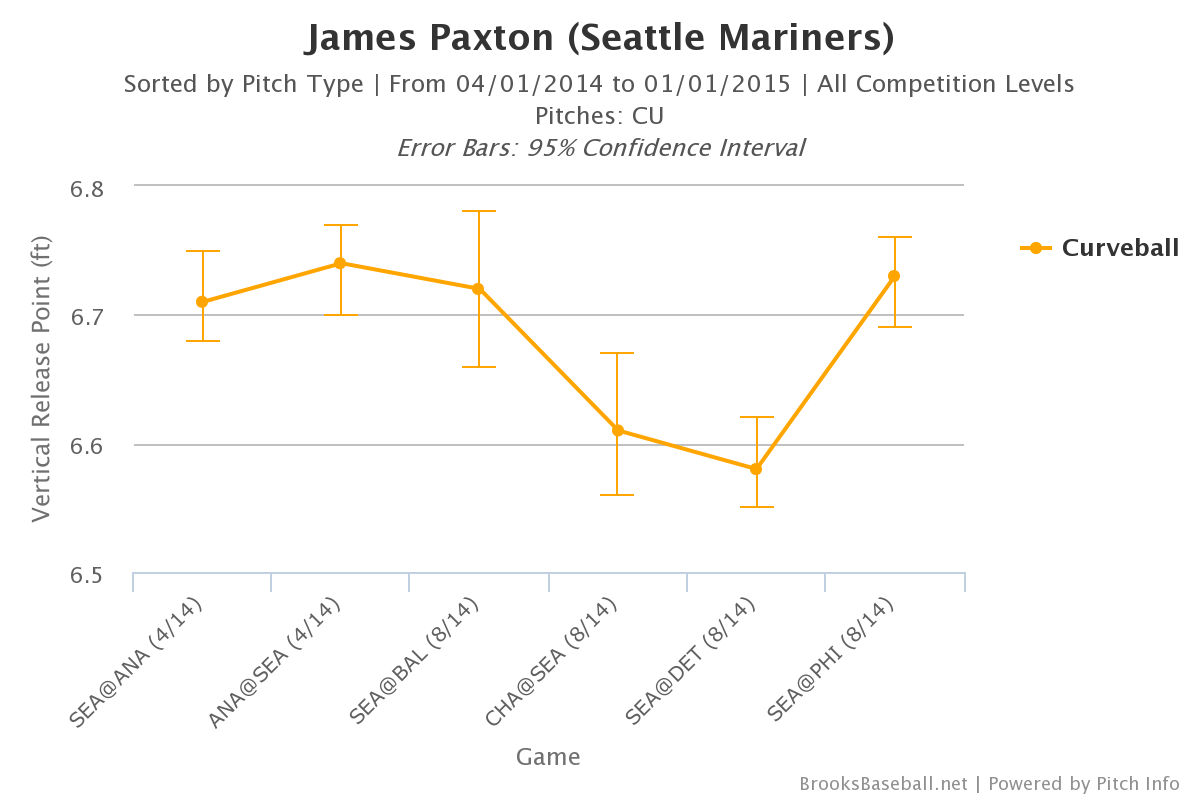 Yeah, we might have something here. And if it is something, it's disconcerting.

To be at his most effective, it seems James Paxton needs to go over the top as much as possible, release the ball at the very highest point. But then, what's the cost? Can he continue to use his improved delivery without re-injuring his shoulder? If the Mariners' preliminary medical research is correct, the answer might be "no." The sample might be small, and maybe this is getting tunnel vision, but this is a true statement: James Paxton pitched from his highest release point, had his best curveball and got hurt all in the same game.

Still, it's too early for conclusions. I suspect this is going to be a bit of a balancing act. As you can see, Paxton has started to work his way back towards releasing the ball a bit higher.

All we can do now is watch, and hope that Paxton and the Mariners can find a point where he can be at his most effective, but stay healthy for what has the potential to be a long and prosperous career.