This is not a joke.

Share All sharing options for: Jay-Z has set up a charity basketball game featuring Felix and Cano against Derek Jeter and Ne-Yo

I know what you're thinking: "Aw, shit. Logan's decided to write satire again. This is gonna be just like that time with the cheeseburgers. Or that time with Alex Jackson. Or that time with the game recap where he wrote like this lame-brained fake letter from the team's hitters to Felix and it sounded completely hackneyed and unbelievable and we were all like "for God's sake Logan knock this shit off" and then he was all "nuh-uh I'm a writer and you're all just lowly commenters I'm not gonna knock this shit off" and then he kept writing stupid-ass satire that no one thinks is funny and --"

...OK, sorry, projecting. But anyways. I know what you're thinking: this is satire.

You are wrong. This is not satire. Today, in Brooklyn, at 8:00 PM Eastern Time, Jay-Z is hosting a charity basketball game featuring Roc Nation clients and some friends. You can buy tickets; general admission is $30. There's a website, and an article on Mariners.com, and everything. It's totally legit.

It is also the greatest basketball matchup since Space Jam. 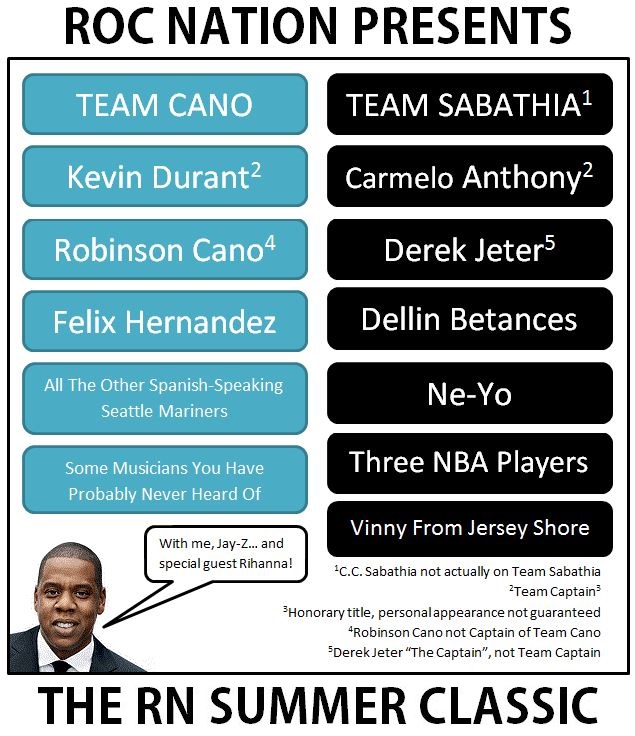 I... I just... I keep trying to come up with something funny to say about this, and there's nothing. There's nothing I can add. Everything you could possibly do to make a charity basketball game hilarious, Jay-Z has done. NBA superstars, MLB superstars, music superstars... NBA washouts, MLB scrubs, DJ Khaled... The only way the RN Summer Classic could possibly be better is if there were a halftime slam dunk contest.

Well, then. Jay-Z, Roc Nation: a tip of the cap from me to you. Congratulations on having officially created the most amazing sporting event in the universe. Seriously, fuck baseball. I'm watching this shit.

Cano retrieves the ball in the backfield, looks for a spot, finds it, passes to Durant - KD receives, he's headed for the three-point line - here comes Anthony now OH AND HE JUKED HIM! The quick pass to DJ Khaled in the corner, and Anthony FOOLED! Khaled now, looking for an opening, tryn'a spin it around and pass it on, King Felix is open and Khaled makes the pass! It's Ne-Yo for the defense, playing up close and personal with the King of Seattle - Felix has no shot, he's forced to toss it up and HERE COMES MORALES! OUT OF NOWHERE - PAST A DIVING JETER - HE LEAPS - HE REACHES - HE SLAMS IT IN! TEAM CANO WINS THE CLASSIC! TEAM CANO WINS THE CLASSIC! 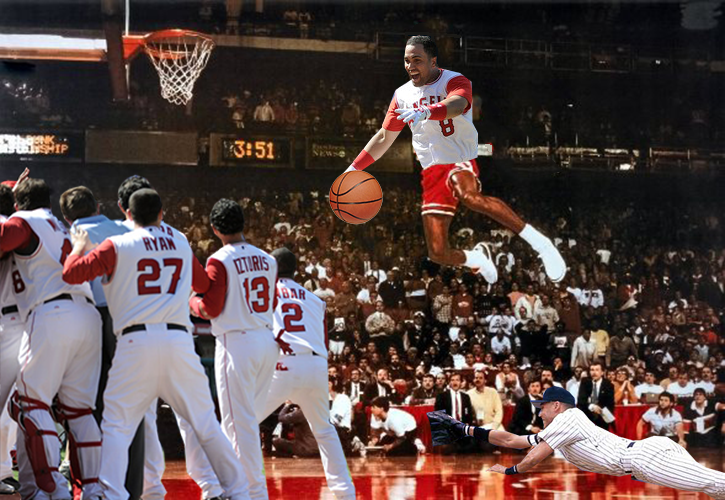 UPDATE: You can stop freaking out about injuries now: the Mariners have announced that Robinson Cano will be the only Mariner actually playing basketball at the event. Sadly, this means no Kendrys Morales dunk contest. I offer the above image as an artist's depiction of what might have happened at a better, more amazing RN Summer Classic.