Mistakes, inefficiency and bad luck lead to Mariners dropping a series to the stupid Phillies.

For weeks now the Mariners have floated our hearts and minds on a seemingly ever-rising tide of change and victory. Positive run-differential, historically great run prevention, a lineup washed of its sins and reborn a shining beacon of mediocrity. These are the Mariners of the present, and they are a hell of a lot of fun.

But today we met the spectral ghoul of Mariner Past, and that phantasmic bastard took us back to a time we don't need help remembering. Today's 4-3 loss to the Phillies was not a loss. It was a Mariners Loss. They have applied and been granted the trademark. Teams that lose to bad teams because their starting pitcher is a Left-Handed Matt Garza on throws to 1B must pay the Mariners remuneration or face legal proceedings. In fact let's just do this and look at the many ways that the Mariners made this loss extra Marinery:

I don't think many expected the Mariners to whack around Cole Hamels today. We've seen on multiple occasions that this lineup struggles against upper echelon left handed pitching, and Hamels certainly falls in that echelon. So the dread of being unable to score much more after Kendrys Morales' solo home run gave way to legitimate excitement when Kyle Seager walked, Chris Denorfia singled and Logan Morrison doubled home the go-ahead run.

The Morrison double gave Seattle a 2-1 and put runners on 2nd and 3rd, with nobody out. Unexpectedly, which is the way I categorize all Mariner rallies, the team had Hamels reeling and were poised to put together a big inning. But, well, erm.

A missed sign on a suicide squeeze? That's pretty Mariner: 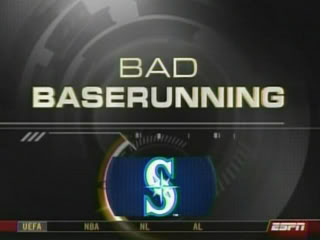 Bottom of the 4th:

It's funny how much confidence I have in James Paxton. His career thus far is defined in almost equal portions by struggles with command, struggles with injury and periods of utter dominance. The thing is when he's stepped on a major league mound it's almost exclusively been the latter Paxton we've seen. When a left handed pitcher sits 96-98 with a fastball and can located a plus breaking pitch? That's a good major league starting pitcher.

But Paxton's last two starts have served to balance the scales somewhat and given us a glimpse of what he has struggled with in the minor leagues. When you can't locate the fastball major league hitters, even Phillies, will make you throw strikes, and the pitch count goes up, clean innings go down, and everything just kind of goes to hell.

Still, despite the command issues Paxton was surviving. Then Andres Blanco hit a line drive off Paxton's foot. The tall Canadian scrambled after it, grabbed the ball, and threw to 1st in time to salvage an out. But he also threw it to no one. A debilitating error led to the loss of an out and put runners on 2nd and 3rd.

Then, pitching to Cole Hamels, professional not-hitter, Jesus Sucre allowed a passed ball and a run. Passed ball allows a run you say? That's another spot filled in in Mariner Baseball Bingo. After a strikeout and a groundout Paxton looked to get out of the inning still tied. That's when the scheming harlot that is BABIP planted one right between the shoulder blades:

The 4th ended with the score 4-3 Phillies. BABIP wasn't done and Kyle Seager drilled a line drive that Ryan Howard caught that would have put the Mariners ahead. Other than that the game was for all intents and purposes over when Chase Utley literally threw his bat at a ball.

It sucks. Losing to the Phillies is not part of the plan here. The plan is to knife through the NLeast's have-nots and guarantee more marquee matchups in September. We all want Felix Vs. Oakland next month to be with the postseason on the line. But part of being in a playoff chase is that every game is important. The Mariners have lost many, many games like this. But that haven't lost many of them when they needed to win them this bad. That's the new part. I suppose it's good but I'm far from used to it.

Extremely quick bullets to round out the hump day: