Mariners do something strange, new in win over Orioles

Win. The strange thing they did was win.

Share All sharing options for: Mariners do something strange, new in win over Orioles

The Mariners lost the trade deadline. I don't know if you heard that or not, but they did. See, they had been linked to David Price since way back before they found out how to make phones work without being attached to the wall with a cord. And then? The Tigers--a true model of operational efficiency--snuck in and stole him from that inept Jack Zdurwait

Austin Jackson and Dustin Ackley have combined to reach base six times with five hits and a walk, scored four runs for the M's

Oh. Well, one lucky night can mean anything in the long run. Baseball is really a funny thing, because one day, Endy Chavez can hit a dinger and win a game for the Mariners, and have you seen Endy Chavez? Isolated events don't contain any larger narratives. One win over the team at the top of the AL East surely isn't indicative of any sort of structural change within a oh wait a second

The first time all year #Mariners have had decent 1-2 atop the batting order. Jackson and Ackley swinging the hot bats and setting table

Ah. Well, you know, sure. A little luck is a little luck. Maybe a need has been addressed, sure. But look, this is a team facing great adversity to their pitching staff, lucking out with a few good months of Roenis Elias and Chris Young, who are both bound to come back to earth any day now. Why they didn't trade for Price is a mystery, because behind Felix and Iwakuma, this team has nothing waiting in the ranks for wait how fast?

Alright. Yes. The Mariners beat the Orioles today, and despite a little heartburn in the ninth, it felt like things were finally all falling the right way for once. By the time Fernando Rodney gave up that final run of the game, making it all 6-3 Mariners, half the crowd at Oriole Park at Camden Yards had left to try and beat the traffic home, which is of course silly when everyone leaves early with the same intention in mind to clog the offramp thirty minutes before the game ends. I feel like there is a baseball metaphor in there somewhere, but I'll let you come up with it.

Today James Paxton pitched 4.1 innings and didn't earn the win, but that's not really telling you anything about his performance. After missing nearly the entire season with a "minor" lat strain, and appearing less than sharp in a few rehab starts in the days since, it seemed all that was needed was a few innings of low-run ball, maybe with the corners of the strike zone found by the second or third. Paxton found the corners after leading off the game with a walk to Nick Markakis and giving up a double to Manny Machado immediately afterward, and though he got Adam Jones to ground into an out, it was enough to plate the first run of the game, and the M's found themselves in a hole.

But then something happened. Paxton settled down and started finding the corners of the plate after leaving everything down during his first three batters. Leaving things down isn't exactly the best course of action, of course, but it's better than leaving everything up, which can be indicative of stress, overthrowing, or simply bad mechanics. It was clear that Paxton was a little nervous and needed some time to settle down, but then he did: he hit 98(!) in his last couple of innings and struck out five in his four innings of work. He walked three, which again, nerves, rust, gunk stuck on the elbow from riding in the baggage trunk during team flights. But the core of what makes Paxton such a dangerous pitcher was on display today, and everyone wondering why the Mariners didn't sell a key piece for David Price should have been watching. See, the Mariners effectively traded for an incredibly solid left-handed starter and it cost...oh, let's see...sending Corey Hart to the DL. I'll take this course of action, thank you very much.

While the O's were carrying their one run into the third inning it felt a little like the Mariners may never score again, which is because you're smart and watch Mariners games. I would be worried about you if you expected two grand slams from this crew. But even though Jesus Sucre missed an opportunity to pick up the Henry Blanco Memorial Backup Catcher Grand Slam flag in the second inning, Dustin Ackley picked right up where he left off and tied the game with a solo blast in the third. 1-1 game.

The next few innings passed without incident until the top of the order came back up with one out in the fifth. And look, Baker is right: the Mariners have a competent 1-2-3 punch for the first time since, hell I don't even remember, and it was on display twice tonight. The first was here in the fifth after Austin Jackson ripped a single and was sent to third on Dustin Ackley's second hit of the game, a double. Then up walked Robbie Cano, who looked at two pitches and then put one here: 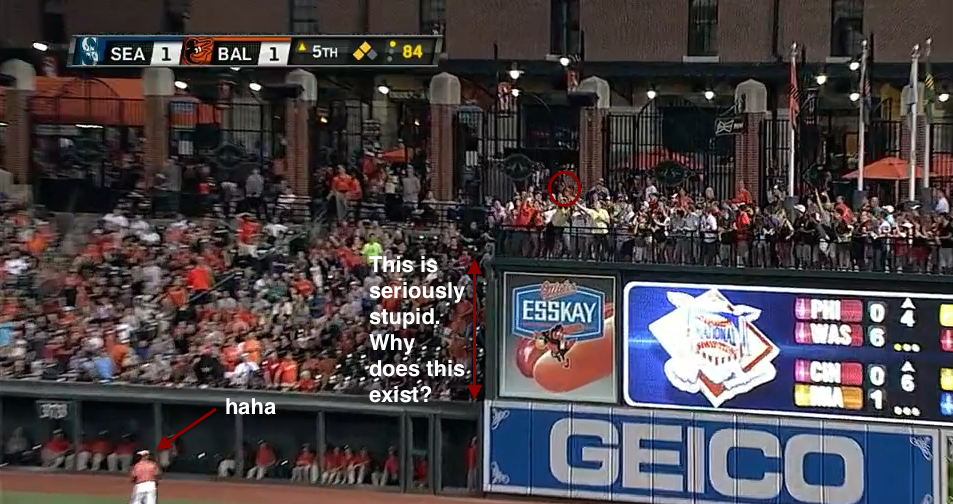 It was kind of a strange moment, really. The Mariners just sucker-punched the AL East-leading Baltimore Orioles, rolling up their shirt sleeves to show a little bit of something that Baltimore fans should probably be at least cognizant of. Instead, this happened: 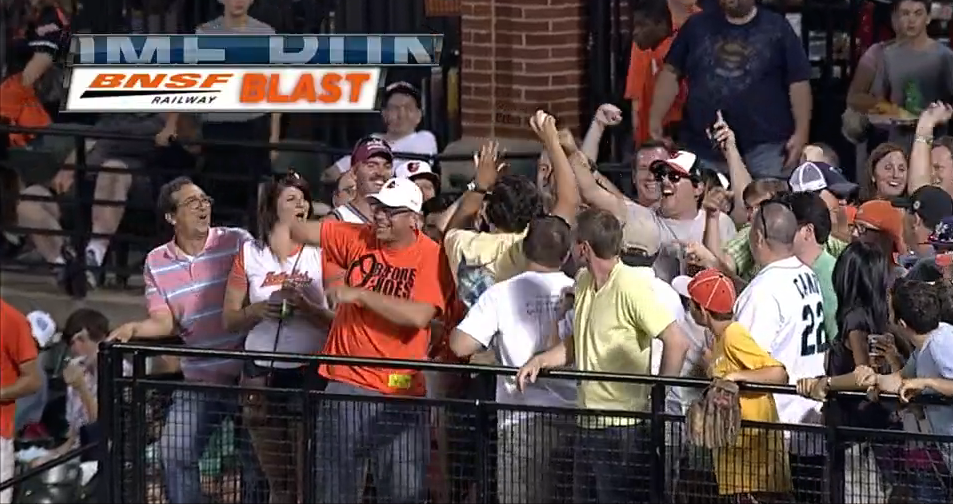 Now, granted. These people all seem acquainted with each other to at least an extent, and are probably celebrating the guy in the yellow wolf shirt having just fucking barehanded a Robinson Cano home run, which probably hurts like mad. But look at these faces! This is pure joy from a cadre of characters that could each elicit an entire speculative novel written about them. I, of course, will not be doing that because the last time I did everyone got upset. But just look. And also know they all started the wave in the eighth inning. Now remember that next time you want to complain about Mariners fans. Turns out people are alike all over.

After Paxton gave up a home run to Caleb Joseph in the fifth, he looked gassed. Lloyd let him face two more, but his pitch count was already at 83, so he was pulled for Leone, who lasted until the seventh to be replaced by whatever the hell Brandon Maurer has turned into. Maurer gave up a double to Joseph in the seventh, but did more of what he has been showing off over the past few weeks. You kind of have to be ecstatic that Jack didn't trade him this week, and you kind of have to know that he got a bunch of phone calls. Instead, we now have a reliever that can throw a mid-90's slider, which is kind of insane.

The top of the order came through again in the eighth, this time assisted by the middle of the order. This is a funny sentence, because what it really means is that 2/3rds of the Mariners' lineup are now capable of doing damage to major league pitching, and I'll let you stop and rest your brain for a second because I know it hurts really bad after reading that sentence.

Sure, we're in for more two-hit days. Kendrys came up here after back-to-back singles from Austin Jackson and Ackley, and an HBP to Cano. Kendrys still looks a little lost at the plate, and although he has apparently been putting in extra time in the cages, he's definitely not the Kendrys Morales we all remember from last year. Still, this lineup played good baseball today, productive baseball that is exactly the kind of thing you need if you want to make a playoff push in September. Which, again. Take a minute. Breathe. I know.

Rodney gave up a run in the ninth but was otherwise his usual self, walking batters and inducing timely groundouts to get out of the game. He interestingly walked straight off the mound tonight, though, not shooting his arrow, but it didn't matter: the Mariners won the game, split the series with the Orioles, and now look for the win tomorrow. A few quick bulletpoints before wrapping it up:

Tomorrow the M's will look to take the series, and they just may do it. Of course, they may not, because as it turns out baseball works that way. Go M's, or something.