David Price beats the M's in his first Comerica start 4-2, but not without a little help

The hyped-up Felix-Price matchup didn't quite go as expected, but certainly wasn't without its share of excitement.

Share All sharing options for: David Price beats the M's in his first Comerica start 4-2, but not without a little help

Felix Hernandez and David Price. Two former Cy Young winners facing off in a winner-takes-the-wild-card-spot game that would surely be the talk of baseball for some time.

You see, this game was a face-off between two fantastic pitchers playing for teams with playoff aspirations. However, someone else had different plans. That someone else was home plate umpire Tony Randazzo.

Throughout the first couple of innings, everything was (essentially) normal. In the top of the first, the Mariners were patient with Price and watched plenty of borderline strikes called as balls. They got Price up to 16 pitches despite not getting a baserunner on, and looked to be on a good pace to get Price out of there early.

Then in the bottom of the first it became evident that Price wasn't the only one getting pinched. The King was having command issues, but didn't really look off his game. Home plate umpire Tony Randazzo simply wasn't going to give Felix the lower strike that he relied upon. Or the inside strike. Or the outside strike. Or any strike anywhere, really. Felix managed to get the first two Tigers out without issue. After that, the first incident occurred.

With two strikes on Miguel Cabrera, Felix started his windup. At that moment, Cabrera muttered something to the effect of "there's something in my eye" to Randazzo. Randazzo threw his arms up to stop Felix in the middle of his delivery. Time had been called. Felix pump faked the throw and danced off the mound. Lloyd barked from the dugout. Felix was obviously flustered as he attempted to get back into his rhythm. Ball two. Ball three. Full count. Felix missed his spot and delivered one right down the pipe to Cabrera who knocked it for a single. Next up, Victor Martinez hit his own to left. Luckily, Torii Hunter grounded out to shortstop and kept the game scoreless.

What was supposed to be a 12-pitch inning for Felix turned into a 21-pitch affair. Time was inappropriately called for one of the best hitters in the game because he had "something in his eye." True or not, you don't grant a hitter time in the middle of a pitcher's windup. Strike one, Randazzo.

The Mariners' half of the second passed without incident: just a Kendrys Morales walk followed by a tailor-made double-play courtesy of Chris Denorfia followed by a Kyle Seager line-out. In the bottom of the second, with J.D. Martinez on first and one down, Alex Avila stepped up to the plate. Quickly, Avila was down to his final strike when Martinez decided to steal second base. Felix threw a fastball just a little inside that Zunino framed to look like it was right down the middle. No call. Zunino fired down to second base. Safe. Wait, did you say no call? 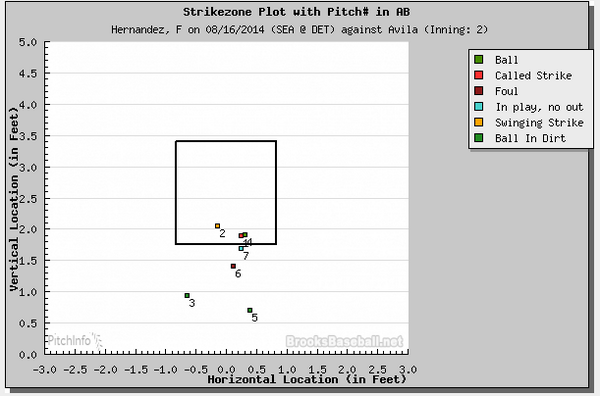 Once again, with two strikes on the hitter, Randazzo gave an advantage to the hitter by calling a very obvious strike a ball (pitch number 4). Avila would single later in the at-bat. There were some clear complaints by a couple of Mariners on the call (most notably Zunino) and McClendon got tossed from the game because:

Yeah, real class act. If you listen to the video linked above, you can very clearly hear the conversation between Randazzo and Lloyd. Randazzo knew he blew the call and was compensating by throwing out McClendon before he could argue with it. In addition:

<blockquote class="twitter-tweet" lang="en"><p>McClendon said he had stopped chirping at Randazzo after the first inning. It was other people who were on him about the missed strike call</p>&mdash; Ryan Divish (@RyanDivish) <a href="https://twitter.com/RyanDivish/statuses/500831873988186112">August 17, 2014</a></blockquote>

Randazzo didn't even know who he was angry with, he just wanted to do something. So McClendon took the heat. And he let Randazzo have it. And it was awesome.

Later in the inning, Eugenio Suarez would ground out to score Martinez from third on what could have been the third out of the inning. 1-0 Tigers.

Bench coach Trent Jewett took over for McClendon for the remainder of the game and Felix's streak ended by throwing just five innings of two-run ball thanks to a high pitch count that was partially affected by some poor calls. Nick Castellanos hit a pretty solid homer on a meatball from Felix, who was clearly flustered from the events that had unfolded. The Tigers rallied off Brandon Maurer for two runs in the 7th and that was all they would need as the Mariners lost 4-2.

Now, can this loss be placed solely on the shoulders of home plate umpire Tony Randazzo? Certainly not. Felix wasn't the only one getting pinched. Can a good chunk of it be though? In most cases, it's easy to argue that the Mariners "shouldn't have let it get close enough to be decided by a few blown calls," but when your opponent is David Price and the offensively-charged Detroit Tigers, every run matters. A game advertised as being a must-see matchup between two of baseball's best pitchers ended up being the Tony Randazzo show. When you've got two forces working against you, it becomes a hell of a lot harder to pull out a win on the road. The Mariners lost. They might have lost regardless of who was standing behind the plate, but once those blown calls started piling on it was essentially game over for the M's.

Tomorrow the Mariners will face Robbie Ray, a far inferior starter to David Price. With a win tomorrow, the M's will fly out of Detroit with a half-game lead for the second wild card en route to facing a trio of last-place teams and a return of their best outfielder on the horizon. I like those chances.