Mariners play Tigers in game with lots of offense and woah, wait, win?

Share All sharing options for: Mariners play Tigers in game with lots of offense and woah, wait, win?

Well it was another one of those games where you hear the phrase "if the season ended today" tossed around. That is a meaningful phrase, to be sure, but it really obfuscates a bunch of nitty-gritty things that happened between the first and the last pitch of the evening.

It was also a game that saw the Mariners surpass the Tigers to become sole possessors of the second Wild Card spot--one that treated Seattle fans to August baseball with playoff implications, gave ESPN headline fodder, and even featured a home run from everyone's favorite quarter-of-a-billion-dollar second baseman. These are all byproducts of the fact that the Mariners beat the Tigers tonight, 7-2, but they also kind of swing the pendulum a little too far in the other direction.

I know, I know. I say this knowing full well that holy shit, what are the Mariners doing and is this real? If you were to put on your Mariners hat and walk out your front door right now to stop by any sports bar in town, there is a good chance that someone would bring up the M's in conversation to you--Jake from Ballard who is sitting at the booth next to yours, that goofy looking bartender that is trying to hit on you because you're a girl interested in sports without needing a male to justify it and I can only imagine how obnoxious that must be, or even that weird guy who strikes up conversation in the stall next to you mid-piss with a Bud Lite-fueled toothy grin. This is what a city looks like when they are excited about their baseball team for the first time since Billy Corgan had hair, and even though nobody wants to talk to someone while they are peeing, it's kind of exciting.

I get all that. I'm excited too. But casting tonight's win as reclamation of the last wild card spot reflects a reality that only lasts for about 12 more hours. Imagining this (continued!) offensive performance as indicative of a now-elite club ignores regression and even just dumb bad luck that could tank the rest of the season. Proudly exclaiming that the Mariners are eleven games above .500 for the first time since 2007 is...woah, wait, 2007? Holy shit, I'm ready for the fucking playoffs.

Alright on to tonight's game.

The M's struck first tonight, notching three runs in the second inning. This is somewhat surprising, because Rick Porcello does a lot of things but giving up three runs in the second inning isn't usually on the list. How did they get it? Kyle Seager single. A Mike Zunino Ty Cobb special. A Logan Morrison RBI single, followed by another from Endy Chavez. I could have made up a bunch of things in this paragraph, and you would have had just as much justification for rolling your eyes at those series of events as you did at this one, except for the fact that things like this are starting to not be that weird anymore. Which is, in itself, weird. A giant, weird vicious circle of weirddom.

Before the inning was over, Chris Taylor reached on an intended sacrifice bunt, and Austin Jackson grounded into a double play for the first two outs of the inning, plating Logan Morrison but denying him an RBI because you only get a tepid cheer during introductions upon your return to your former ballpark. What, they aren't giving those runs away!

Except they kind of were: 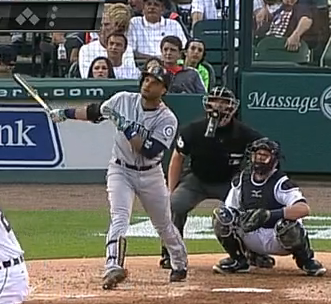 This is a picture of Robinson Cano. If you notice, he is kind of casually holding his bat out, leaning over his scrunched waist with a calm curiosity that doesn't seem to suggest he is going to immediately start running towards first base. He doesn't look like that because he didn't have to run to first base because he hit his 11th home run of the year because he's Robinson Cano, and why were you ever worried about any of this?

After Cano's dinger in the third, it was 4-0 Mariners, and James Paxton was back out to continue facing one of the most efficient offenses in all of baseball. Paxton was having a lot of trouble early in the game, really only locating his fastball while bouncing curveballs off the dirt a good inch in front of the plate, which is not where curveballs are supposed to go. For an example, look at this series of pitches against Victor Martinez in the first, who reached on an error by Chris Taylor: 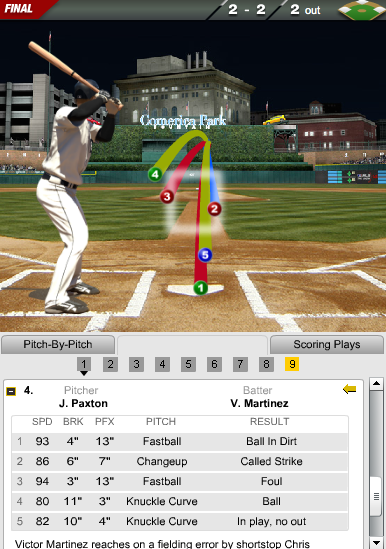 Although he still has very limited major league experience, Paxton has kind of been known as a strikeout machine who can hit his spots with regularity. Today, he was lucking into grounders and being forced to leave a few of his pitches back in the dugout while pitching to the likes of Miguel Cabrera and Victor Martinez. What happened? One run in the third, really only thanks to a bizarre triple from Rajai Davis and a fielder's choice grounder off the bat that scored him a minute later.

Blowers and Aaron Goldsmith were joking after the game that the Seattle Times' headline should be something along the lines of Paxton throwing a clunker, except with a noted mention that the Mariners still won. If today was a clunker, then we have a lot of incredible baseball awaiting us from Canada's newest and freshest left arm. I have ESPN on in my hotel room, and their little bumper to end their coverage of this game was focused on Paxton, reading "Seattle has a Prince and a King." I think we all know that this isn't probably the best way to describe all this, or the right nickname. But hey. Neat. Or something. I guess.

In the top of the fourth, the Mariners put another run on the board off the bat of Chris Taylor, who sent in Logdog from second. To end the inning, Austin Jackson was caught stealing, and Lloyd came running out to the dugout, ostensibly to challenge the call. After a brief conversation, he decided to return to the dugout with his challenge intact. This was a good decision, because literally two minutes later, in the very next at-bat, this happened:

It didn't seem like anyone had any idea what happened here, but the end result was an out, and that made for a quick fourth, bringing the Mariners right back to the plate in order to get another run off the bats of Kyle Seager, Robinson Cano, and a little Detroit Tigers defensive specialty that put Kendrys on first.

Paxton made it through six innings to get his third win of the season, and was effective even with poor command, walking one and striking out only two. The Mariners combined for 11 hits, combining a cycle amongst the team, and Tom Wilhelmsen broke a few more ankles he can add to his broken-ankle-bone necklace he will be wearing in the post-apocalyptic Cormac McCarthy dystopia that surely awaits once the Mariners make the postseason.

Also Brad Miller (in for Cano in the eighth after a minor baserunning injury that you don't need to worry about) sort of stole home in the ninth after hitting a triple, but it was only because Chris Taylor was stealing second on a pickoff attempt, and someone forgot to tell the Tigers that there are four bases. When you hit that many dingers, maybe you start to forget that fourth isn't just a given.

But for today? They own that second wild card spot right out, and leave a series sweep of the Blue Jays to have the chance to take another against the next rung on the ladder. The excitement may be there in Seattle sports bars, and the taste of even the idea of the playoffs is certainly going to be a palpable experience over the next couple of weeks, assuming the M's keep all this up.

But you have to know that that locker room is as dialed in as it has ever been. Cano, like everyone else, has been praising Lloyd's consistency. Players are remaining locked down and humble. They are probably talking to each other while they pee, but that's only because they are all in a locker room at the same time and you just kind of have to do that.

And at the end of the day, today's 7-2 victory over the Tigers was great, but tomorrow Felix faces David Price in an August baseball game that directly impacts the playoffs without the qualifier "spoiler." A year ago that's all you or I would have ever asked for. Tonight, it almost feels like it's owed to us. I don't know if that's a good or bad thing, but holy shit I'm excited.