Mike Zunino currently leads the AL in getting beaned. Why is this happening? And is it a good thing?

Share All sharing options for: Mike Zunino: #1 in our hearts, #1 in the league in HBP

This season, Zunino has been beaned an AL-leading 12 times. Only Russell Martin has been hit by more baseballs this year (with 13 HBPs). For a bit of historical context, only three Mariners have ever been hit by more pitches in a season (Jose Guillen in '07 with 19, Dave Valle in '93 with 17, and Kenji Johjima in '06 with 13). Even more amazingly, Zunino has accumulated his 12 HBPs in just 358 PAs; on the year he's been hit during 3.35% of his plate appearances. Since the beginning of the live-ball era, there have been 16,080 player seasons where a hitter has accumulated at least 350 PAs. Zunino's 3.35 HBP% this season ranks 74th all time. That puts him in the 99.54th percentile! I don't know that getting hit by a pitch is something that Mike looks to do (he's no Old-School-Kyle, after all), but his ability to take the HBP this year has been borderline-historic.

I should point out that HBP rates have fluctuated somewhat over time, peaking in 2001, but they've been more consistent than home run rates or strikeout rates: 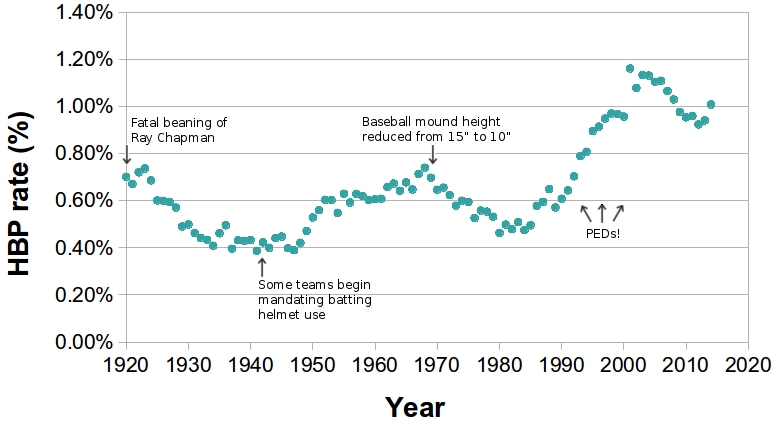 Side note: I think that the trends in this curve are pretty interesting and somewhat telling about the different periods/eras that baseball has experienced as well as the ongoing battle for supremacy between pitchers and hitters. I've included a few historical events near the points of inflection in this plot that could potentially help explain some of the changes in the trends.

A common narrative (that I've often heard mentioned during baseball telecasts) is that HBP leaders tend to be either 1) ultra-scrappy players who look for literally any/every opportunity to get on base (e.g., Craig Biggio) or 2) hulking, thick-skinned catchers who take so much abuse over the course of the season that something as unsubstantial as a 90 mph baseball to the forearm is nothing more than a trifling, fleeting annoyance (e.g., Jason Kendall). In more recent years, another breed of HBP leader has emerged: players with layer upon layer of knee/shin/forearm protectors who are just as likely to stick out an elbow to get hit as they are to turn away from an inside pitch (e.g., Jason Giambi). While Mike is a catcher, I don't really think of him as falling neatly into any of these categories. It's almost as if oversimplifications and generalizations oversimplify and generalize things!

To get a sense of what kind of pitches Zunino is getting beaned by this year, I went through a bunch of PITCHf/x data and plotted all of the pitches that have hit him on a single strike zone plot. I've used the other players on the Mariners as a frame of reference, comparing their HBPs with Mike's, to see if there are any marked differences.

Here, the turquoise squares represent the location of the pitches that have hit all Mariners batters this year, while the pitches that have hit Mike are overlaid in white. This .gif is set to loop every 1.5 seconds, so if you stare at it for a little while you can get a sense of what's going on. Also, I set the x-axis as horizontal pitch location (inside vs. outside) so that lefty and righty batters can be compared more easily. To look at this data in a different way, I also put together this small table of average values:

We can see that the average pitch that has hit Mike is 1) significantly less far inside and 2) significantly higher off of the ground than the average pitch that has hit other Mariners batters. These sample sizes probably aren't large enough to make any definitive judgements about these trends, but it certainly seems like Mike is less hesitant to take a pitch off of his body. Maybe since these pitches are closer to his eye level they're easier to see, so he knows how to turn and take them without getting hurt. Maybe he has a higher pain tolerance than many of his team mates, so he's less inclined to throw himself out of the way of inside pitches. Maybe he's trying to get hit intentionally sometimes to try and supplement his meager walk rate. Or maybe it's just happenstance. These, of course, are just (somewhat) educated guesses. If anyone else has any theories/insights based on this data, I'd be happy to hear it. (Leave a comment!)

Also, to confound matters further, pitchers have a greater tendency to pitch Mike down and away, so it's not as if he's simply seeing more inside pitches that just happen to hit him. This could be leading him to lean over the plate a bit more, looking to protect the outside portion of the strike zone, which might leave him less prepared to jump out of the way of inside pitches... but it's hard to tell definitively without breaking down his batting stance; with only a single year of t-ball experience under my belt, this is not really something that I feel particularly qualified to do.

In any case, I also went ahead and compared Mike's HBPs against the other top-four HBP leaders this season (Russell Martin, Carlos Gomez, Starling Marte, and Anthony Rizzo).

I don't know that this set of data is glaringly illustrative of anything specific (I just figured out how to put together simple .gifs, though, so I figured I'd include these charts because why not?), but we can try and glean something from this information. For one, the fact that all of Mike's HBPs are clustered so closely together could be indicative of some conscious decision on his part to get hit by a pitch if it is in a certain area. Also, unlike like Russell Martin (who has been hit several times by pitches that are only two or three inches inside), Zunino's most egregious HBP was more than half a foot inside. This seems to suggest that Zunino doesn't try and stick out an elbow to get hit by a pitch. I don't know that this is a skill that Mike has worked on developing, but subtracting those 12 HBPs would decrease his already tiny OBP from to .268 to .243. These do make a difference.

There are countless of other factors that likely influence a player's HBP rate: their batting stance and where they stand in the batter's box, whether they're more of a pull/opposite field hitter, their propensity for swinging at pitches outside of the zone, how likely they are to mouth-off to the opposition/showboat and instigate a beanball in the ribs, etc. I haven't taken any of these into account in this brief study, but maybe that'd be something interesting to look at a bit more in the future.