After being pummeled into submission by Felix Hernandez and the Seattle Mariners, the Toronto Blue Jays have given up on the 2014 season. A formal concession of the American League Wild Card race is expected before tomorrow's game.

It wasn't supposed to end this way.

In mid-June, with the Blue Jays out to a six-game lead in the surprisingly weak AL East, Toronto was on top of the world. Canadian sports fans were abuzz with dreams of postseason glory. National media outlets ran features on manager John Gibbons. Analysts pointed to high expectations for Toronto's 2013 squad as a precursor to their 2014 success, and audiences everywhere bought in. "I was all aboard the Jays train," said baseball enthusiast and noted Canadian Tim Horton after tonight's game. "But after the last few days... well, it's been horrifying. I just keep shaking my head, asking myself, what happened?"

What happened indeed. Just as the Jays finally seemed to be living up to their potential, everything came crashing down. Slugger Edwin Encarnacion hit the DL with a quad injury, and first baseman Adam Lind followed with a fractured foot. Dynamic infielder Brett Lawrie broke his finger; after spending more than a month on the DL he came back and immediately reinjured that troublesome left oblique. GM Alex Anthopolous let the trade deadline pass him by, allowing the Oakland Athletics and Detroit Tigers to steal the best pitchers available while adding only utility man Danny Valencia. Before anyone realized what was happening, the AL East's June kings found themselves clinging desperately to a Wild Card slot.

Then they played nineteen innings in Detroit.

"Looking back, that game was really rough on them," said Canadian Prime Minister Stephen Harper. "Just a textbook pyrrhic victory. They won, but they burned their whole bullpen doing it. Then they had to catch an overnight flight to Seattle for a game against the best pitcher in the American League, and, well... the rest is on the scoreboard."

And what a scoreboard it was. Seattle pounded the exhausted Jays' pitching staff for 11 runs on 10 hits, six of which went for extra bases. Meanwhile, the Mariners' King Felix dominated, striking out eight while walking none and allowing only three hits. After the game, MLB commissioner Bud Selig released a memo declaring the Toronto Blue Jays officially eliminated from playoff contention.

To whom it may concern:

WHEREAS the Toronto Blue Jays are not currently in possession of a place in Major League Baseball's postseason,

WHEREAS several team members have succumbed to injury and/or narcolepsy in attempts to help their team attain such possession,

WHEREAS the unholy smackdown laid upon those Blue Jays by the Mariners of Seattle on this August 11th has made it abundantly clear that the sleep-deprived and injured Jays are utterly incapable of reattaining their former peak standing,

WHEREAS a clear majority of the 20,000 Jays fans in attendance at Safeco Field on that night have since abandoned ship and converted to Mariners fandom,

WHEREAS Major League Baseball cannot allow a clearly inferior team with a dwindling fanbase to participate in the hallowed tradition of the one-game Wild Card play-in,

THEREFORE BE IT RESOLVED that Major League Baseball's commissioner's office hereby officially bars the Toronto Blue Jays from participation in any playoff games until September of 2015. Should the Toronto Blue Jays end the season in possession of a wild card spot, they will automatically forfeit it to the team with the next-best record.

Although the Commissioner's injunction is not legally binding, sources close to Jays' ownership expect the team to acquiesce. "It's a disappointing end to the year for sure," said manager John Gibbons, "but I can't say it wasn't deserved. Honestly, we've been running on empty for weeks. D'you really think this team could've competed with Seattle anyways? Look at this game's lineups. Go top to bottom, position to position, and tell me which Blue Jays you'd take over their Seattle counterparts. Bautista over Chavez. Melky over Morales. That's the whole list. We're quite simply not prepared for a stretch run."

Blue Jays slugger Jose Bautista, the only player to score against the Mariners tonight, passed out from exhaustion after the game and could not be reached for comment. Speaking on his behalf, losing pitcher Drew Hutchinson told reporters "Whatever, man. We don't care about the season any more. We give up. Jose's got the right idea - we all just want some sleep. We just want to forget these two days ever happened. If that means the end of the playoff chase, so be it."

Perhaps not coincidentally, Toronto utility infielder Munenori Kawasaki was seen being pulled aside by GM Alex Anthopolous in the midst of a postgame attempt to inspire his teammates through dance. What exactly was said is unclear, but Kawasaki immediately abandoned all motivational efforts. Some sources say that, in light of this most recent humiliation, Selig has threatened the Jays with contraction. Certainly, if that were true, it would explain Kawasaki's sudden solemnity.

In the end, the only thing faster than the Blue Jays' remarkable ascent was their staggering collapse. From their peak as kings of the AL East, the Jays have devolved into a mere cautionary tale for other AL contenders: watch out for the Mariners. If you don't bring your A game, they'll beat you so bad that your team is disbanded.

You can make an excellent argument that Felix Hernandez should be front-runner for AL MVP right now. 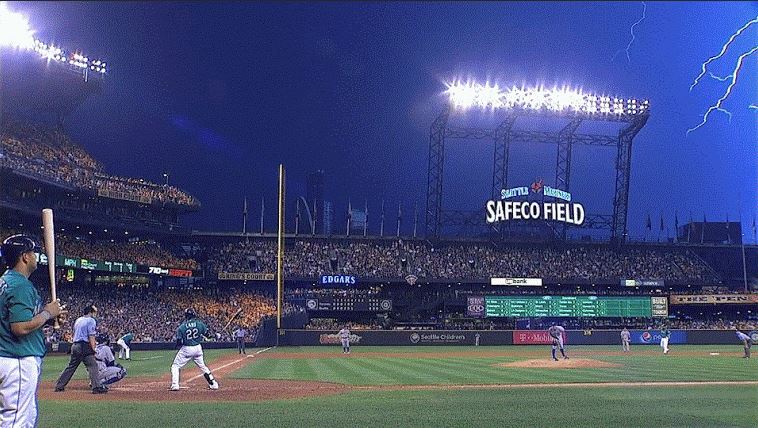 It'll be J.A. Happ leading the Jays against fly ball wizard Chris Young tomorrow. With any luck, the next game'll be half as fun as this one was. Go Mariners!