Someone once said "it ain't over 'til it's over," and while I'm pretty sure he was talking about resiliency late in a game that is managed without a clock, he was also unknowingly describing games like the one we had today between the Seattle Mariners and the Chicago White Sox. It took a long time for this baseball game to actually get to over though, and by god, it would have been really nice if it took half as long as it did. Here's the short version:

Today's baseball game lasted four hours and thirty-eight minutes. Twelve pitchers were used by both teams. There were fourteen innings. Two mid-inning stretches. One punchout by homeplate umpire Ed Hickox on a 2-strike pitch. Three impressive catches in the outfield. Seven innings of shutout baseball by one of the best pitchers in the world. Eight shutout innings from a team 9 games out of first place in a city where wind literally grabs baseballs out of the air to move them around willy-nilly. There was a high stakes out recorded by bunting foul. A first baseman got hit in the face with a baseball. All of these things happened before it was over, and with good measure, because that's what happens when you play a game of baseball that lasts as long as the first season of an HBO miniseries followed by a Bela Tarr film.

I say this because after four hours it became patently clear that the game wasn't going to be over 'til it was over. Certainly not with a box score like this:

But before we talk about Weird Baseball, we should probably look at how the game got to such a spot in the first place. Felix was Felix today, which is a fun sentence to type because a) it rolls off the fingers nicely, b) I can type it often, and c) you know exactly what it means. Felix gave up a leadoff single to Adam Eaton and then didn't give up another hit until the eighth inning. With the exception of a walk to Adam Dunn in the fourth, Felix was sort of carrying a no-hitter deep into a scoreless game. Which would have been absolutely maddening had it been the case.

Thankfully, Adam Eaton's single in the first inning only allowed Felixrage® to fester over the usual inability to provide the King with any run support late into a quality start. Last Felix Day, I tried to argue that this wasn't a thing anymore--that the classic meme of watching the King take three hits into the ninth inning while M's hitters try to spell their name in the air with sparklers except using baseball bats was over. So today I felt sick to my stomach by the time he was giving up runs in the eighth. Guilty.

But I'm still convinced it's true, to an extent. It's not that the M's will stop shitting on Felix games, it's that when they do, our brains immediately grasp the comforting capital-N Narrative of 0-1 Felix losses. Well today they kind of did that, but then they rolled up their sleeves and got their hands dirty to tie the game and get Felix off the hook for a loss. Sure, a win would have been nice, but it's progress, people. The times they are a changin'.

Felix gave up two runs in the eighth thanks to some timely Sox hitting, possible fatigue, and a bummer of a force play that saw Kyle Seager missing a tag on a rundown by about three inches. The tag was initially ruled an out, which could have saved the second run of the game (and the next two hours). Instead, that runner scored on a sac fly to Tyler Flowers in the next at-bat, and the Mariners went into the ninth with work to do.

But remember, these aren't The Mariners anymore. After Robinson Cano worked a leadoff walk in the top of the ninth, Robin Ventura came out of the Sox' dugout to get his right hander in the game to face Corey Hart. Putnam threw three pitches, and we will be looking at the third one, right here: 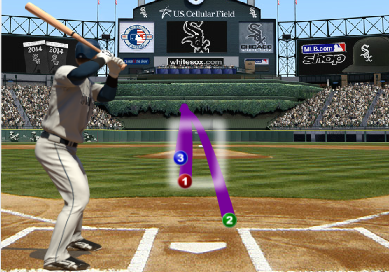 It wasn't the best pitch from White Sox reliever Zach Putnam, but it wasn't bad. And even better is that Hart's result was actually probably closer to what they wanted to happen: forcing a right-handed power(ish) bat to roll over a sinking pitch just on the corner of the zone to get the double play. But as you can see, it went over the plate just enough to get Hart to make better contact, and he still rolled over it, but just enough to find a gap in between second and third to send Cano to second base. Ackley came in to run for Hart on the bases, because well, what else would you do there, and then it was only a matter of time. Seager sent Cano to third, Logan Morrison lucked into a fielder's worst nightmare for the first run, and then Condor got the second in. The game was tied, the King was off the books, and there were still about two hours to go.

Medina came in and had a dramatic but ultimately successful ninth. The Mariners loaded the bases in the tenth and scored none. Charlie Furbush got an out and Danny Farquhar sent it to the eleventh. Nothing happened in the eleventh. Nothing happened in the top of the twelfth. Tom Wilhelmsen had a great two innings to send it into the fourteenth. It was the fourteenth inning and there were vultures hovering over the sea of dead bodies in the U.S. Cellular stands, but they didn't realize that everyone was just asleep. If hell is like I imagine it, then today the Mariners were in hell: a four-and-a-half-hour game at U.S. Cellular with no offense and that one guy that thinks he's the Most Important Fan in the world, screaming to throw-off every Mariner swing or catch. It was brutal.

But then--sweet, sweet success! Ventura left in Roland Belisario for his third inning of relief, and the Mariners made him suffer with a series of long, taxing at bats. First it was Logan Morrison, who struck out after eight pitches. Then Condor singled, stealing second during Brad Miller's ten-pitch ground rule double and scoring afterward. It was the battle of the game, and it was the only run the Mariners would need to finally make the game over, because it was clear that the game had no interest in doing that itself. Rodney came in with a three-out save and now the Mariners live to see another day.

And really, the bummer is that this was a pretty remarkable comeback for an M's team that just continues to do stupid things they shouldn't be doing. When Tyler Flowers hit his sac fly to score the Sox' second run of the game, their win expectancy was at 95%. Statistically speaking, the Mariners had only a 5% chance of winning the game, and those are worse odds than they have to make the playoffs this fall. And yet, they won anyway.

None of that makes 12 lifeless innings any more fun, but part of that could also be that I've completely forgotten what it feels like to actually have an intense vested interest in baseball games in July. When Kyle Seager hit his game-tying grand slam in the 14th inning against these same White Sox last year, it was exciting not because it felt like the M's made progress in the playoff hunt, but because holy shit that was weird. That's not the case this time. Today's 14-inning game wasn't exactly a thriller, but unlike last year's it was a victory, and a victory that mattered, at that. If that's what its like to follow a team playing good baseball, then sign me up. I guess.

That Yogi Berra quote worked pretty well for this weird game, but you know, it works pretty well for the rest of the M's season, too. In the past, it really actually has been over before it was over. But not this year. Things are just starting to get interesting.