The A's just got better, but the Mariners must remain calm

Billy Beane has traded Oakland's top two prospects - plus more - for Jeff Samardzija AND Jason Hammel. The division just got a lot harder for the Mariners to win, but that doesn't mean they should change their trade deadline plans.

Share All sharing options for: The A's just got better, but the Mariners must remain calm

Last night the Oakland Athletics made the first big move of the summer, sending top shortstop prospect Addison Russell, 2013 first-round outfielder Billy McKinney, and struggling young pitcher Dan Straily to the Chicago Cubs in exchange for Jeff Samardzija and Jason Hammel. Samardzija and Hammel had been previously linked to the Mariners, who are rumored to be in the market for some starting pitching depth, but the two pitchers are now obviously off the table. The Cubs certainly got their players' worth, though, netting one of the ten or so best prospects in the sport as well as the Athletics' top minor league outfielder and an interesting young arm. In fact, the package the A's sent the Cubs is more than a little reminiscent of the one the Mariners almost gave the Diamondbacks for Justin Upton two winters ago.

Whoever you think won the deal (and there's a case to be made for each side), the move has drastically reshaped the trade market. Arguably the second and third best pitchers available are now gone, and all of the AL's non-Beane general managers have been left scrambling for a response to the Athletics' upgrade.

A's made their move. Looks like the rest of division isn't sitting idly. Hearing Angels are close to a deal with major league players, too.

Not to mention the Mariners have been shopping around their relief pitching surplus. Could be a lot of buyers as they look to fortify.

The impulse to match the Athletics is a perfectly understandable one. After all, no one wants to get stuck in a one-game playoff, which is exactly what the Angels and Mariners are looking at if they can't catch up with the Swingin' A's. But now is not the time for the Mariners' front office to panic and change their plans. Rather than calling Oakland's "all in", they should continue to play the hand they've been dealt.

note to self: pretty sure that's not how you play poker; come up with a better analogy before publishing

Honestly, I don't think the Athletics were ever the Mariners' real competition. It's great to be optimistic - as Colin noted not long ago, the Mariners still have a shot - but a quick look at Fangraphs' Playoff Odds is pretty sobering. Even the sunniest of the site's odds give the M's just a one-in-nine chance of winning the division. There's no projection system that gives the team playoff chances under 50%, but in each case that 50+% is almost all Wild Card. And that was before Oakland added Shark and Hammel. No, the Mariners' real opponents are the other second Wild Card contenders: Kansas City, Toronto, Baltimore, and New York. And this deal hurts those teams way more than it hurts the M's.

See, the big weakness of the AL East Trio is starting pitching. The Yankees just lost C.C. Sabathia for the year. The Jays have had rotation troubles for what feels like half a decade. The Orioles have the lowest rotation WAR in the American League. Each of those teams had been linked to either Samardzija or Hammel, and each of those teams will now have to come up with something else. The Mariners would love to add a starter as insurance, but they don't need one. Not like their competition does.

So no, it's not panic time for the Mariners. The team leading their division just got way better, but they weren't going to catch that team anyways, and the market's shift in the wake of the move hurts their competitors more than it hurts them. Instead of losing their cool, Jack Z and co. should keep doing what they've been doing all along: looking for an insurance pitcher and a young, controllable outfielder.

This isn't the time for the Mariners to sell the farm. Especially now that a Beane Blockbuster has knocked their division chances down through the floor, giving up valuable prospects for rentals to get a chance at a one-game playoff simply isn't worth it. They have relievers to move, and a whole bunch of teenage starting pitchers, and if a really nice young piece like Scott Van Slyke or Corey Dickerson becomes available they can offer up Nick Franklin. That should be enough for now. 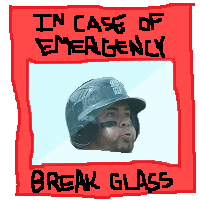 As we've said all year, the Mariners are in a particularly tricky trade deadline position. Panicking and selling the farm for a Matt Kemp or an Alex Rios would be a waste of prospects and money, but if the team fails to improve they could find themselves not even making the play-in game. The solution the team seems to have settled upon, i.e. adding an insurance SP and a young OF, is a sensible middle ground (provided that the OF isn't Dayan Viciedo). Now they just have to execute... and not get intimidated by the Oakland A's.