Kyle Seager should be an All-Star

Kyle Seager is one of the very best third basemen in baseball, and he's had a terrific first half. He deserves to be in the All-Star Game.

Share All sharing options for: Kyle Seager should be an All-Star

Here's something you won't hear on sports radio: so far in 2014, Robinson Cano has been a little bit of a disappointment. Clubhouse chemistry and lineup legitimization aside, the Mariners' big offseason splash has a five-year-low wRC+ and a career low ISO. Some of that was to be expected, of course: moving to Safeco almost never does hitters favors, Cano's not getting any younger, and Fangraphs' super-regressed park factors for the Safe give hitters less credit than early returns on the fence move suggest they should. But the M's are going to be paying Cano $24M per year for the next decade, and even if you believe that a free agent win now costs about $6M (as I proposed over the winter and as Fangraphs later agreed), Cano's struggling to be worth his contract in his very first year. Some of that is small-sample defensive metrics, but most of it is his power outage. Until his recent XBH spree, the man was producing like 2012-2013 Kyle Seager.

Conveniently for the Mariners, though, Kyle Seager is currently producing like Robinson Cano! 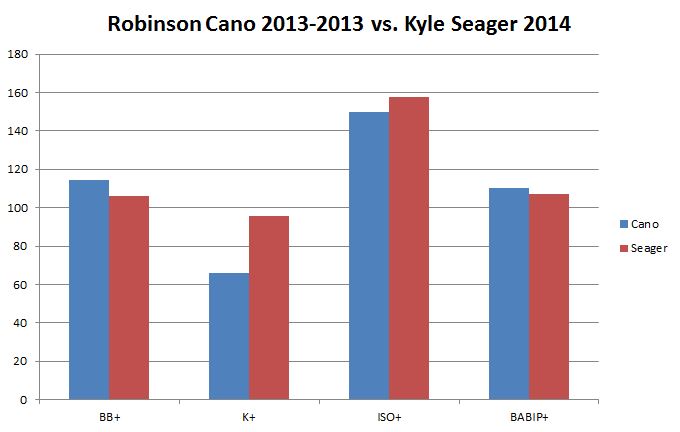 The BB%, ISO, and BABIP more or less match. The only real difference between the Cano the Mariners paid for and the Seager they got is in strikeout rate, which is forgivable because Kyle's doing all of his work in a serious pitcher's park. The metrics you see on the X axis are simply BB%, K%, ISO and BABIP relative to league average - crudely constructed, but enough to conclude that Kyle Seager's having a pretty damn good season. An All-Star-worthy one, even.

Which is why it's such a shame that he's not getting any All-Star recognition. Once every week or so, CBS posts an update on the All-Star voting results. As of June 3rd, the leaderboard for AL third basemen:

That, dear readers, is what Lloyd McClendon would refer to as horseshit.

I can't honestly fault voters for the top two. Donaldson was a stealth MVP candidate last year, and this year he's been Seager's equal or better in all but BABIP. He leads AL third basemen in fWAR, and though a lot of that comes from his insanely inflated UZR, he probably deserves an invitation just to make up for his 2013 snub. Beltre was hurt to start the year, but since returning from the DL he's been his usual 140 wRC+ self. His defensive numbers are down two years in a row, but it's hard to believe he lost his glove game that fast - he's probably still a premier defensive third basemen. Neither of them has been obviously better than Seager, but they're two respectable picks with name value.

But Evan Longoria? Brett Lawrie? Manny Machado? You've got to be joking.

Longoria's got the star power, but he's having a real rough year, and it might be due to a change in core skills. ZiPS has him pegged as more or less Kyle Seager's offensive equal for the rest of the year, and Seager's insane first half has to count for something. Lawrie and Machado, meanwhile, have never been above average hitters in the major leagues. They're both young, and they're both great glovemen, but neither one is Kyle Seager. For goodness' sake, Machado has an 81 wRC+. He just got suspended for throwing a bat at a dude. This is the guy with twice as many all-star votes as Seaboss?

Sadly, it's probably too late to mount a last-ditch campaign. All-Star voting ends today, and even if everyone who reads this article votes for Seager 25 times, he won't catch Machado - let alone Donaldson. Which means that Seager's fate rests in the hands of John Farrell, the Red Sox manager in charge of selecting backups.

I understand that Farrell's job isn't easy. No matter what he does, someone's going to get snubbed, and a roster for a single game doesn't really need three third basemen. (Then again, neither does it need fourteen pitchers.) But Seager's been the AL's seventh-best position player to date. He's on track for the best season by a homegrown Mariners position player since A-Rod. Just yesterday ESPN ran a segment on the Mariners MLB-best record since April 23rd, which you may remember as the day Seager snapped a slump and a losing streak with 2 HR and 5 RBI. Before that game he was hitting .156/.280/.219; ever since he's hit .317/.376/.575. You want to know who to credit for the M's improved offense? Kyle Seager.

There's no reason why Robinson Cano should be an All-Star while the man who's taken up his offensive mantle sits and watches at home. With a good track record and a stellar first half, Kyle Seager has earned a chance to show his skills at the Midsummer Classic. John Farrell ought to give it to him.