Mariners remember how to lose properly, falling to Orioles 3-2

Share All sharing options for: Mariners remember how to lose properly, falling to Orioles 3-2 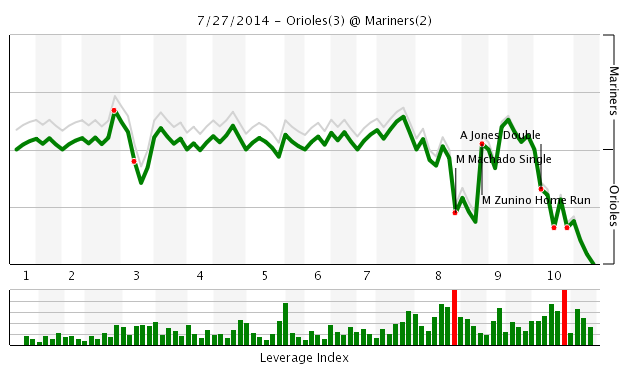 It's almost like baseball is a sport designed to contain multitudes, to simultaneously enrage and upset fans through a near 200-day season. Swinging extremes like upturned magnets refusing contact with one another. The problem is that the Mariners are really good at this aspect of baseball. Not at winning, but at baseball, that is, if baseball is both frustrating and apparently random, chaotic. I think we can all agree that baseball is both of those things, and so I'm going to just continue to say that the Mariners are better at baseball than any other team in the league.

So yes, the game, if I have to. I guess that's why you are here. Elias didn't give up a hit until the third inning, striking out the side in the first and lucking into a spectacular diving catch from Corey Hart that I missed by literally minutes while I was letting my dog outside. I was furious to come back in to see the official Mariners and ROOT Sports Twitter accounts praising Hart's performance in the outfield, which I always guessed would look more like a drunk centenarian playing Twister while coated in vasoline instead of Andrew McCutchen.

Then I saw the replay. Here is Hart's dive: 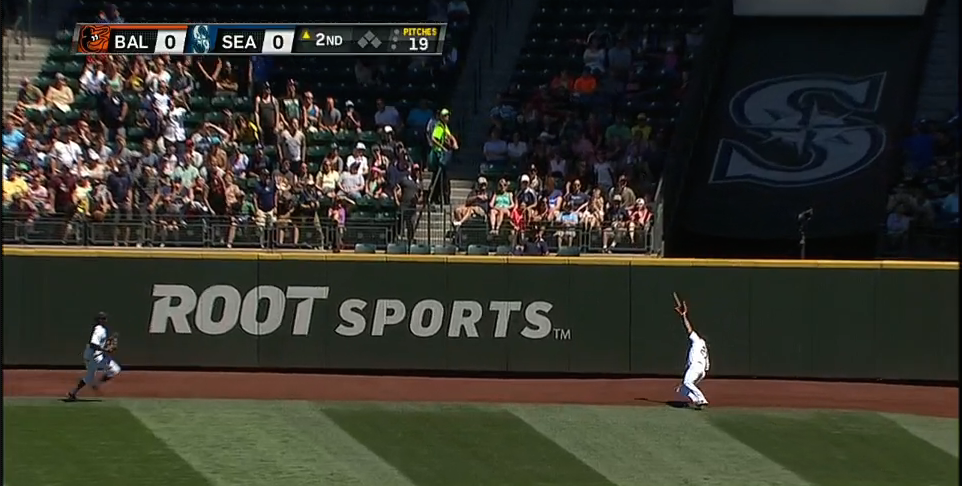 I mean, he made the catch. He held on to the ball whilst falling face first into the ground. That counts as a diving catch, but I think it would be more apt to call it a falling catch, as in falling over because 230 moving pounds were being supported by knees held together by spit and rubber bands. Which, yeah, drunk centenarian playing Twister. But whatever. Kudos to you, Corey. I couldn't have done that.

The Mariners got their first run of the game in the bottom of that inning, following an unfortunate episode of TOOTBLAN that saw Kyle Seager trying to stretch a single into a double, starring Nick Markakis. But then Hart, Morrison, and Zunino all had productive at-bats, and suddenly Chris Taylor was standing on second base with his first career double and RBI.

The Orioles got it right back in the third, though, after Elias put Manny Machado on first base. Elias uncharacteristically had a little trouble finding his command here, and suddenly Caleb Joseph had doubled, and Jonathan Schoop singled to score the tying run. Elias, nervous, shaky. I know this all runs counter to what everyone was obsessing over in spring training (almost like a person with a fluid personality shouldn't be relegated to a simple byline related to their cultural identity or previous experience!), but it still was a little strange to see. Strange, that is, until Mike Blowers brought up a little tidbit to challenge our rock-solid conception of Elias' nerves.

Blowers noticed that Elias seems locked into a solid, regimented clock while pitching without runners. But as soon as someone reaches base, Elias starts to turn the ball over in his hand while leaning in for the signs--apparently a nervous tick. This is, of course, pretty dangerous for both balks and readable tendencies by runners eager to steal a base in a high leverage situation. Blowers wondered if Elias even knows he does this, which seems like a red flag for nerves.

Now, of course, there is a big difference between nerves turning a pitcher's brain into mush and rerouting them into stress relief. But if anything, this illusion of Elias as some sort of determined, iron robot needs challenging, especially in light of his recent struggles. He's a 25 year old kid who stumbled into playing ball at the highest level, and he's still learning how to utilize his full potential. And that should make those struggles a little easier to stomach.

Elias finished the night with six strikeouts and three walks, departing in the sixth for Tom Wilhelmsen. Tom pitched well over two innings, only giving up a single hit and further encouraging talk of turning him into a starter, or at least a long man. The game was mostly zeroes until the eighth, when Brandon Maurer ran into a bit of trouble, throwing Manny Machado a gimme that was headed for the gap between third and second, sure to wind up in Ackley's glove while a few runs scored. But Chris Taylor dove to stop it, then tried to fire back to second to get Hardy. The throw was weak because he was horizontal above the ground, and although they almost had Cruz out at third a run scored and the Orioles were on top, 2-1.

Then, Zunino put a baseball here: 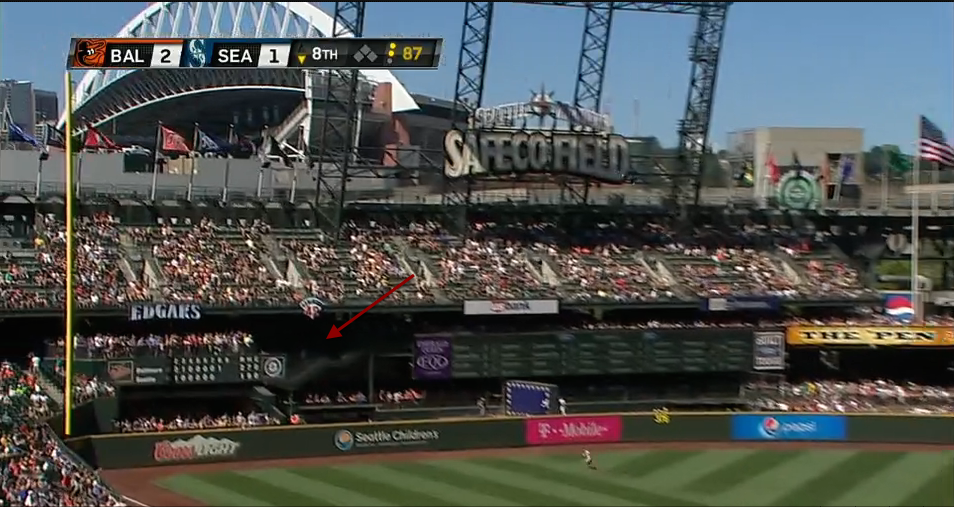 He was lucky, too, because Orioles' submariner Darren O'Day threw him an 88mph fastball, which is just about the only thing Zunino knows how to hit right now. But regardless, it was 2-2, and the game was yet again headed to extras. Extraaahhhhhhhhhs. Extrughhhhhhhhss.

Yoervis Medina had his worst outing of the season, coming in for the tenth and giving up a double to Adam Jones, walking Nelson Cruz and Chris Davis, and then giving up the go-ahead run on a deep fly from Manny Machado, scoring Jones from third. The M's struck out in the bottom of the tenth and that was it.

Now it's a day off before the dreaded season-ending fortress that is Cleveland. The trade deadline is Thursday, and this week could very well be the most important one of the season. Which will all happen just in time for Endy Chavez to come back from injury to join a $107 million dollar graduate of Franklin Gutierrez university in the outfield. Go M's. Or something like that.

1. Dustin Ackley: sell now? Or are you somehow still after all these years of following the Seattle Mariners encouraged by a broken prospect's signs of life in the second half?

2. Chris Archer apparently got upset at David Ortiz for flipping his bat in today's Red Sox/Rays game. What is, in your opinion, the silliest unwritten rule that still seems to upset players?

3. Your phone rings. It's Bud Selig. Well, let's be honest, Selig probably hasn't used a phone in years. It's his assistant. Still, turns out Rob Manfred isn't going to be able to take over Selig's position until January 2nd, thanks to a previously scheduled vacation in the Bahamas. Selig('s assistant) is asking you to take the reigns for a day, giving you complete control over every aspect of the game. What one rule do you change during your 24-hour reign of terror?