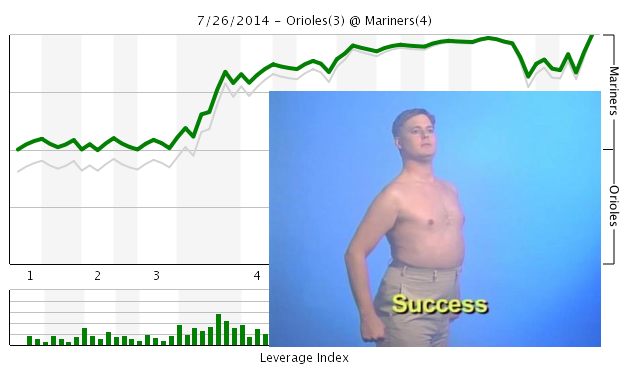 Well, the Mariners just scored as many runs in three hours as they had scored in the previous 96, and while that sounds remarkable in the abstract, it's actually kind of depressing. Still, depressing doesn't show up in the box score. Wins do, and runs, and the Mariners got both of those today thanks to a great outing from Chris Young backed up by bats actually making contact with baseballs.

I've said it before, and I'll say it again: Chris Young could be the most valuable Mariner this season behind Felix and Cano. Today he continued his remarkable ability to regress upward, lasting seven innings and striking out eight Orioles hitters. His recent uptick in strikeouts has been a topic of discussion across the baseball interwebs recently, but it's still amazing to actually watch unfold: Young will probably pitch one more time before the month of July ends, but his 31 strikeouts on the month are more than he had throughout all of April and May. Regression was supposed to be happening soon. It's not.

And honestly, this is even more impressive than an Ibanez 2013 situation. This is true value finding its way onto a team that desperately needed it. Fangraphs puts Chris Young at 0.3 wins on the year, but that's mostly because of his bizarre xFIP trickery. His bWAR is 2.5. On paper, Iwakuma is clearly a more valuable pitcher, but baseball doesn't happen on paper, and the Mariners basically just turned Randy Wolf into Anibal Sanchez. That's better value.

But yes, on to the goings on of the ballgame, I guess. The first hit of the day came in the top of the third, when Delmon Young dropped a single in front of Corey Hart in right field. Yes, you read that correctly. It would be irresponsible to say anything about Corey Hart's work out there today other than "Somehow his knees did not spontaneously combust" or "Look, you can see him breathing" or "Yeah but Nelson Cruz was in left field" because he only had to catch a single pop up. He also went 0-3 on the day, and was pulled in the seventh for Stefen Romero which continues to be a thing. Romero promptly looked at three pitches in the eighth, which also continues to be a thing. I am now going to stop talking about Corey Hart and Stefen Romero.

The good news is that the Mariners actually put some runs on the board this time. In the third inning, Jesus Sucre dribbled a ball right over the head of Orioles Ryan Flaherty and into right field to put him on first base, later going to third on a Dustin Ackley check-swing double. Robinson Cano came up to the plate, and Buck Showalter, the ever-noble elder statesman of the AL East, decided to put him on base because Yankees. Bases juiced for Kendrys Morales, cleanup hitter of the second-half 2014 Seattle Mariners.

Kendrys quickly fell behind to a 1-2 count, and failed to check his swing on a pitch from Bud Norris in the dirt. Except then that pitch did the whole magic bullet thing and found Kendrys' foot, plating the first run of the game for the M's. And they were lucky, because he definitely swung at it. This is admittedly not a great angle, but you can kind of see it here with the blurry motion of the bat: 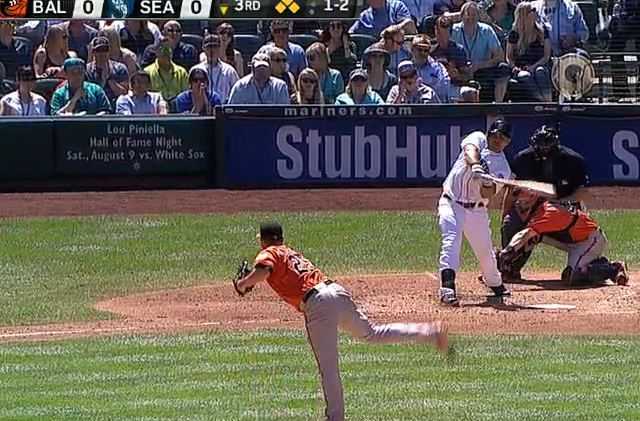 After this, Kyle Seager sent a run across the board with a single of his own, and then Corey Hart struck out which is a problem because I said I wasn't going to talk about him anymore but I had to right here. After Hart, Logan Morrison found good contact with a pitch, sending it into left past the ever elusive glove of Nelson Cruz. Kyle Seager saw this rounding second, and took off for third just as the ball rolled under Cruz's dancing feet. The problem was, though, that Kendrys was standing in the shade past third base, staring into Edgar's Cantina with a blank stare on his face with a stop sign on the basepaths. Seager immediately put on the brakes inches away from Machado at third, but the ball was on the way back to the infield, and Kendrys had no choice but to stumble home for the tag. Inning over, but 3-0 Mariners.

Back-to-back doubles off Ackley and Cano in the bottom of the fifth would give the M's their fourth run of the ballgame, and they would need it after Young left in the eighth. Danny Farquhar uncharacteristically plunked Adam Jones after getting two quick outs, and then walked Nelly Can't-Get-On-Base-At-Safeco Cruz. Lloyd saw enough and quickly threw Joe Beimel in, and suddenly it was 2-4 Mariners after Seager misplayed a Chris Davis grounder. Medina gave up run number three, and the meltdown was in sight. The best bullpen in the American League was about to shit the bed and send the Mariners packing for their fifth straight loss.

Which, you know, made Fernando Rodney's career save #200 all the more exciting as he threw out David Lough trying to steal second, and the Mariners ended the four-game losing streak with an arrow shot into second base and a double shaving-cream pie celebration in the dugout. See, it would be selling these guys short to call them the best bullpen by ERA and opponent average. They are also the best bullpen as teammates, giving the fans a little drama and their 37-year old teammate a chance at a career milestone. We really have the best guys on this team, we do.

So yes, M's win on the day and head into tomorrow's Elias start with a little ground to makeup in the wildcard race. I know this doesn't make yesterday or last week feel any better, though. The M's are still standing at the edge of a deep precipice, all too fascinated with the sound of pebbles trickling down into the murky depths with each kick of the feet. What they need to do is look up and realize that falling five-hundred feet to your death really hurts. What they will do has yet to be seen. But one thing is for certain: they have yet to fall, and it would do everyone service to remember that. Including themselves.

1. Which reasonable trade chip would you have the most difficult time seeing leave Seattle?

2. Best place to watch Mariners games besides Safeco or your home:

3. Favorite cartoon from your childhood: