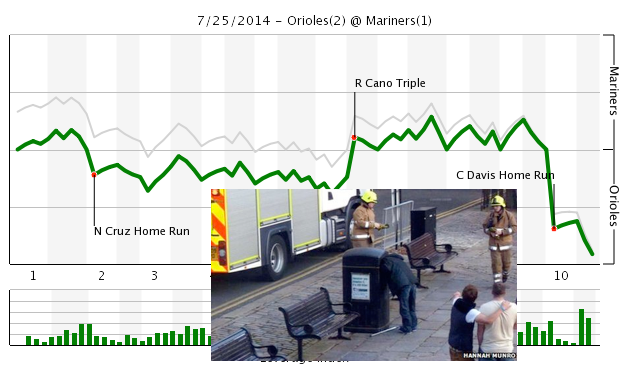 Yes, this was terrible, unjust, painful and dumb. But it's July 25th, and the Mariners are only 1.5 games out of the playoffs. Go back to last year at this time and tell me you're still as upset as you were when this game ended.

1. Aliens have just landed a flying saucer on the National Mall in Washington DC. After a giant robot emerges and zaps everyone with a laser eye thing, some other stuff happens (don't worry about it) and then they are suddenly right there, standing on your doorstep and asking you questions like galactic anthropologists straight out of a 1950's science fiction film. You stand at your door wearing cutoff shorts with bags in your eyes when they notice that you have a Mariners baseball game playing on your television in the background. What is this? They become immediately fascinated, with little understanding of the social utility of sports or why one would bother watching or following a team that has been terrible for ten years play a game that is ultimately meaningless in the grand picture of things. You tell them:

2. Who do you hope goes first after the next 40 man addition?

3. Tell me about the best sandwich you've ever had: